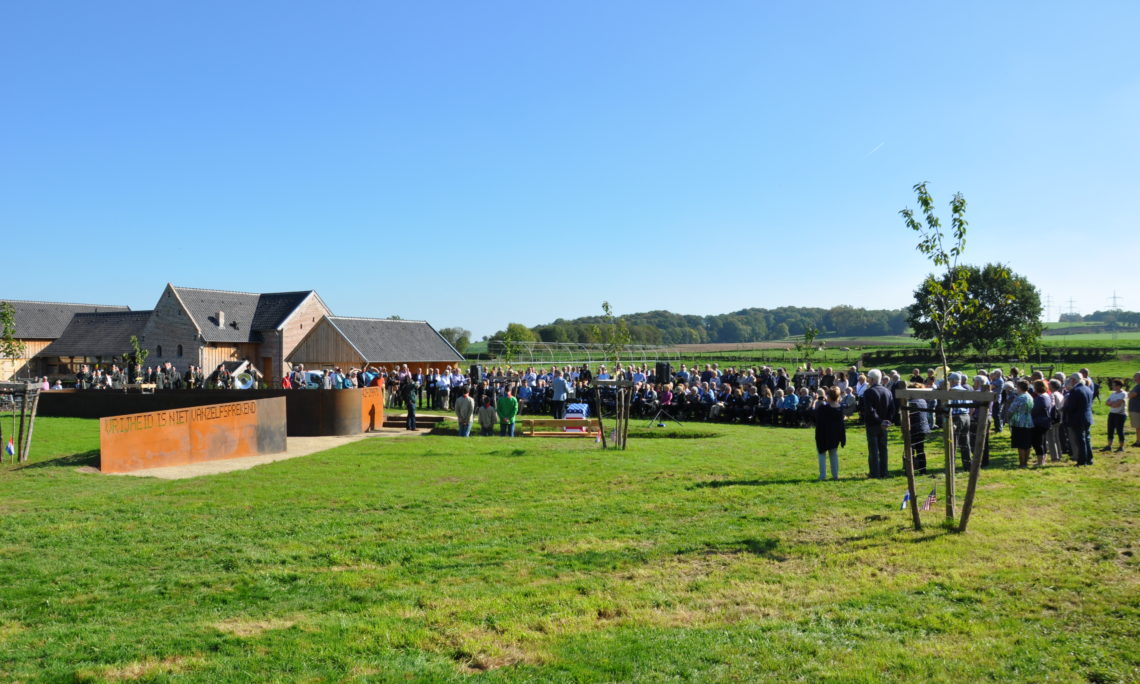 The Chargé d’Affaires Shawn Crowley delivered remarks at the unveiling of a new monument in the community of Beek on Saturday, October 14.  He was joined by Mayor Christine van Basten-Boddin and the deputy Governor of the Province of Limburg Ger Koopmans.  The Embassy’s Air Attaché Colonel Scott Fisher also participated in the ceremony.

On October 14, 1943, a B-17, piloted by 1st Lt. Vernon K. Cole, 24, was hit by a rocket over the Netherlands.  Cole ordered an immediate bail-out.  Four crew members were killed that day; six were able to parachute to safety.  All six were captured by the Germans and spent the rest of the war in various German Prisoner of War camps.  The last of the survivors, Lt. Joseph Columbus, died in 2009.

This monument was dedicated to that B-17.  More than thirty American family members of the crew attended the ceremony.  In his remarks, Crowley thanked Roy Göttgens and the Stichting Herdenking Oorlogsslachtoffers Beek for their research and dedication to this project.  The full remarks are below.

Deputy Governor Koopmans, General Alex, Col. Fisher, Mayor van Basten-Boddin, and most importantly the community of Beek and the family members of the crew.  Thank you for remembering the brave deeds of 74 years ago.

I would like to recognize Roy Göttgens and everyone in the Stichting Herdenking Oorlogsslachtoffers Beek for the research and outstanding work that made this ceremony possible.  We would not be here without you.  I understand that some of the American family members found one another only after Roy tracked them down in the United States.

We are here today on the one hand to remember the crew.  They came from all over America.  They were all young men, younger than my son and daughter.  2nd Lt. Robert Partridge was the oldest at 25; 2nd Lt. Vernon Cole and Technical Sgt. Robah Shields Jr. were 24; Staff Sgt. Irving Mills was 23; 2nd Lt. Joseph Columbus, 2nd Lt. Charles Kuehn, Staff Sgt. Donald Richardson, and Technical Sgt. Robert Folk were all 22; Staff Sgt. Adrien Wright was 20; and the youngest–Staff Sgt. Frederick Zumpf–was only 19.

Few of them probably knew much – if anything – about the Netherlands.  And yet it was here that they met their fate.  Their flying fortress set off from England to neutralize four ball bearing factories in Schweinfurt used by the Germans to build planes and tanks.  They never made it.  Instead, four of them died here in Beek and six were captured.

October 14, 1943, saw numerous examples of bravery and courage, scenes repeated often throughout the Second World War.  The pilot, Lt. Vernon Cole, steered his crashing plane away from Beek to avoid casualties on the ground.  Brave Dutch citizens in Geleen risked their own lives trying to prevent police from arresting the Americans who had survived.

As the Mayor mentioned, we are also here today to remember what these young men were fighting for.  I think that is summed up nicely by the Stichting’s motto:  “Vrijheid is niet vanzelfsprekend.”  We cannot take freedom for granted, or as President Kennedy once said, freedom is not free.

Both the United States and the Netherlands remain committed to what these young airmen stood for.  Together our countries are more secure and more prosperous.  Some of you may not know it, but the relationship between the Netherlands and the United States is the longest, peaceful, unbroken connection my country has with any nation in the world.  These ties were forged as allies in both war and in peace.  They were forged through trade and investment that supports one million jobs on both sides of the Atlantic.  They were forged through the Marshall Plan, which was launched 70 years ago and provided aid to the Dutch people worth more than $1,700 per capita today.  Most importantly, they are maintained by the connections that countless individuals have made with each other through ceremonies such as this one, through educational exchanges, and through travel.  We should all do our part to keep these vital links alive.

The longer I spend in this country, the more I am struck and immensely touched by the Dutch determination to remember those who fought for their freedom.  I am especially grateful for your efforts to pass these stories to the younger generations.  I hope that the presence of the most senior U.S. civilian and military officials in the Netherlands here today is a small sign of how much we appreciate and value your efforts.