Home Home | News & Events | Thanksgiving in the home of the pilgrims 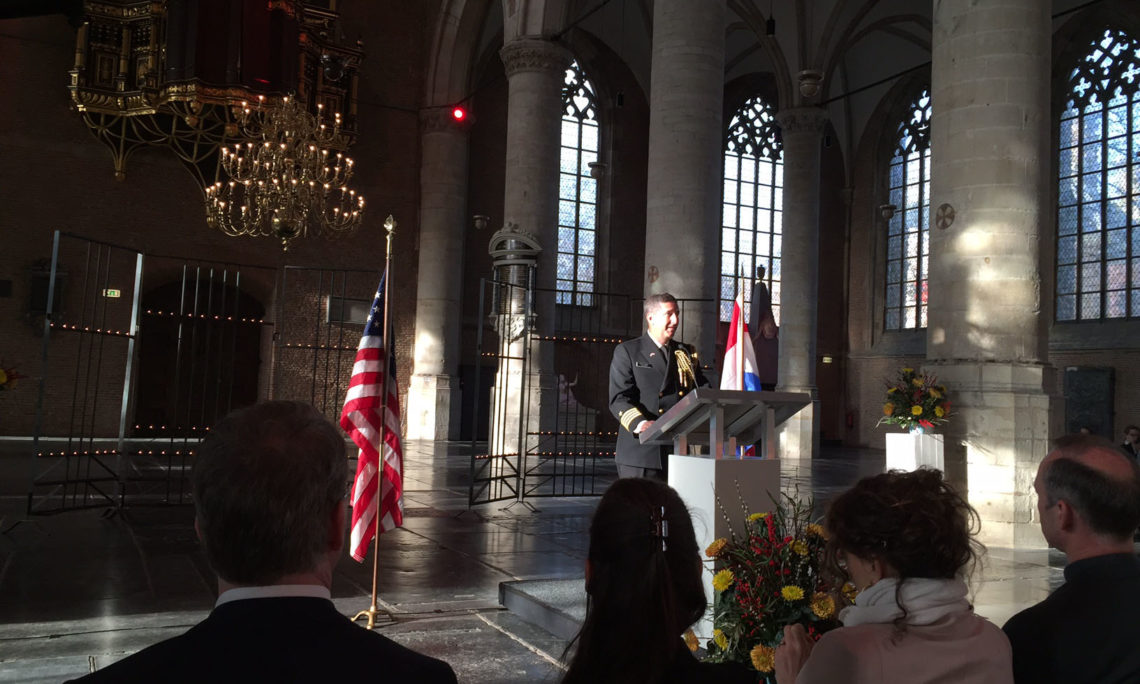 Captain Robert Buzzell speaks at the historic Pieterskerk in Leiden.

In many ways, this is where it all started: Leiden’s Pieterskerk in the Netherlands. In 1620, 35 pilgrims departed Leiden for Plymouth in England. From there, they sailed onward aboard The Mayflower to the new colonies of Massachusetts. The first harvest festival celebrated in the new colony is seen as the origin of Thanksgiving.

And here, on Thanksgiving Day 2016, more than 400 people – including a descendant of Moses Fletcher, a signer of the Mayflower compact – took part in a service that celebrated the long and deep ties between the United States and the Netherlands. The non-denominational service celebrated the courage and vision of the Pilgrims who set out from Leiden to look for new freedoms and bountiful land in a new world.

John Robinson and his followers, fleeing religious persecution in England, arrived in Amsterdam in 1608. Life in Amsterdam was not as tranquil as they had hoped, and soon about 100 came to Leiden in 1609. The congregations soon settled around the Pieterskerk, begun in 1390. A massive cathedral, it took about 180 years to complete. While the congregation grew, the time in Leiden was difficult for most. In addition, war between the Dutch and the Spanish was on the horizon. This, it was thought, could have decidedly negative repercussions on the religious liberty enjoyed by the Pilgrims. In 1619, it was decided to emigrate again – this time to America, by way of England.

A small group, led by John Carver, was to head out first. They left from Delftshaven aboard The Speedwell, which was to sail to America alongside The Mayflower. The Speedwell, unfortunately, proved unseaworthy and had to sail back to Plymouth. Just 35 of the Leiden Pilgrims could squeeze aboard The Mayflower, alongside 66 other passengers. They reached the coast of New England on November 21, 1620, despite a desperately difficult crossing.

Things did not significantly improve once upon shore. Just 50 of the original 111 survived. William Bradford, who had been appointed Pilgrim Governor, pronounced a day of giving thanks for a good harvest. Dr. Jeremy Dupertuis Bangs, a historian and the director of the Leiden American Pilgrim Museum, believes the Pilgrims might have been inspired by watching annual services of Thanksgiving for the relief of the siege of Leiden in 1574.This celebration was shared among all the colonists as well as a nearby tribe of Native Americans. It is said to have lasted three days and involved games and firearms exhibitions.