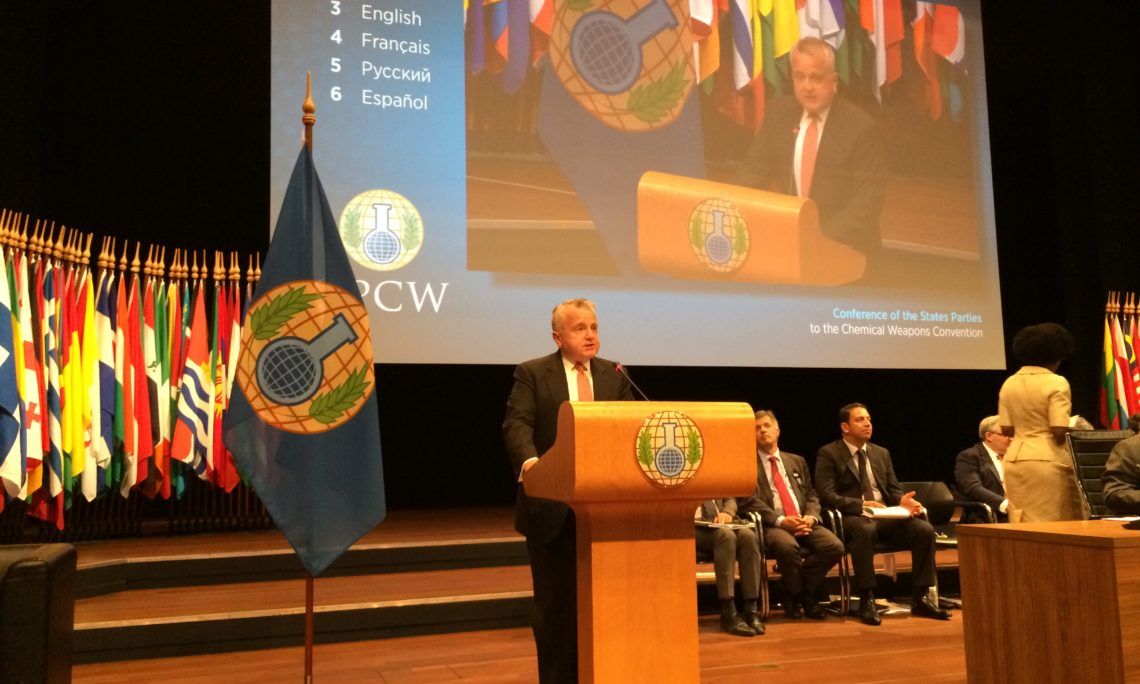 AT THE FOURTH SPECIAL SESSION OF THE CONFERENCE OF THE STATES PARTIES
JUNE 26, 2018

ORGANIZATION FOR THE PROHIBITION OF CHEMICAL WEAPONSTHE HAGUE, NETHERLANDS

Director General Űzümcü, Chairperson Bellouki, it is an honor to join you today at this special session to address the current crisis resulting from the appalling rise in the use of chemical weapons. An overwhelming number of State Parties were in support of calling this special meeting, and it is heartening to see the resolve of like-minded states in solving this crisis.

For much of the Chemical Weapons Convention’s long history, the OPCW and States Parties had a singular focus of destroying legacy chemical weapons stockpiles. The use of chemical weapons was an issue for a bygone era, or so we thought. But, sadly, that is no longer the case.

Chemical weapons have been used recently, to tragic effect, across the world – in Asia, the Middle East, and here in Europe. The Assad regime has continued to use chemical weapons to terrorize and kill Syrians civilians. In March 2018, we saw the use of an unscheduled military-grade nerve agent in a brazen assassination attempt on UK soil. Last year, the chemical agent VX was used to assassinate Kim Jong-Nam in the Kuala Lumpur International Airport. Further, the Islamic State of Iraq and Syria has used chemical weapons repeatedly in Iraq and Syria in recent years. These barbaric acts must stop now.

The OPCW is a Nobel Peace Prize winning organization for a reason. It has proven its ability to adapt readily to change, to respond ably and quickly to wide-ranging crises, with highly professional and dedicated experts implementing its mission.

The draft decision put forward by the United Kingdom and a number of co-sponsors, including the United States, provides a roadmap to reaffirming the international norm against the use of chemical weapons. It provides concrete actions to attribute responsibility to those who have violated this value that we all share.

Today, on behalf of the United States, I call on all State Parties to support this decision and to provide the OPCW with the tools it needs to further our shared goals of deterring, preventing, and responding to chemical weapons use.

The OPCW Fact-Finding Mission has been investigating credible allegations of chemical weapons use in Syria since 2014, and, relying on its cadre of chemical weapons experts, has confirmed such use many times over. Unfortunately, the fact-finding mission is limited by its mandate from following the facts to identify those responsible.

The OPCW-UN Joint Investigative Mechanism (The JIM) in Syria proved that it is possible, through countless hours and dogged investigative work, to put forward a thorough, independent, and impartial analysis to determine CW attribution. There is no reason to believe that the same Organization involved in such work for the JIM is not up to the same task itself. The United States deeply regrets that Russia vetoed the JIM renewal in the UN Security Council. Russia has also been campaigning against any action in the OPCW Executive Council on Syria.

Third, is the ability of the OPCW to further facilitate enhanced capacity-building. This includes tools to allow the OPCW to help Parties to implement their Chemical Weapons Convention obligations, enhance chemical security, and enable international cooperation in the field of chemical activities for those purposes not prohibited by the Convention.

Finally, the OPCW needs to be able to share information with other investigative efforts. This collaboration would allow us to feed into the work and expertise of other investigative mechanisms, such as the Commission of Inquiry and the International, Impartial, and Independent Mechanism, which support our goals of ensuring that chemical weapons cannot be used with impunity.

To conclude, I want to emphasize the United States’ determination that restoring the norm against chemical weapons use is a collective responsibility that calls for collective action. We are grateful to the diplomatic coalition of countries that are working to uphold the norms against the use of chemical weapons — the International Partnership against Impunity for the Use of Chemical Weapons and the Australia Group.

We must continue to use the Partnership as an instrument to share information on chemical weapons use and counter false narratives. Through the Partnership, we can build the capacity of Participating States to coordinate our response in the face of chemical weapons use. These economic, judicial, and political arrangements exist for coordinated action. Now is the time to put them into action – to impose serious costs for those actors who make that fateful decision to use chemical weapons. It is absolutely vital that we stand united and use the tools at our collective disposal to deter the future us of CW by anyone, anywhere.

Although the drafters of the Chemical Weapons Convention did not imagine a world where chemical weapons use would increase over time, they nonetheless drafted a treaty that can be responsive to our current environment. Chemical weapons use may have created a crisis, but we as States Parties can put an end to that crisis, by taking decisive action to further enable the OPCW Technical Secretariat to address chemical weapons use and further prevent its re-emergence.

As many of you know, President Trump stated in April 2017: “it is in the vital national security interest of the United States to prevent and deter the spread and use of deadly chemical weapons.” We have taken this to heart and are committed to doing our utmost to stop, and hold accountable, those who use chemical weapons.

I ask that this statement be made an official document of the session and posted on both the external server and the public website. Thank you.