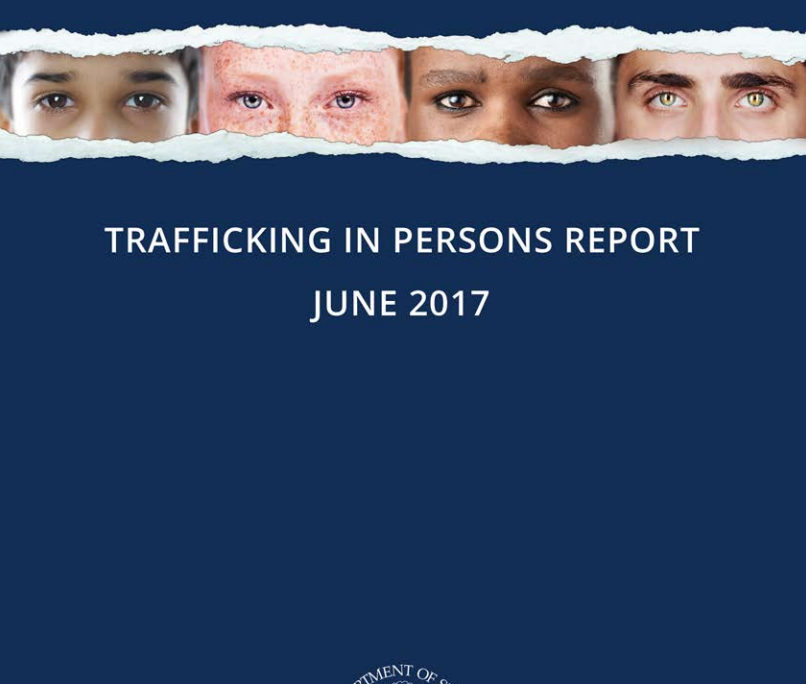 Well, thank you so much, Susan, and welcome to all of you to the State Department for this important event, and particularly I’m honored to welcome members of Congress, and in particular I want to highlight the leadership of Chairman Corker who’s with us from the Senate Foreign Relations Committee this morning. Thank you. (Applause.) I think this really illustrates the dedication to combating human trafficking and the commitment of our country that we have this joint effort underway across the entire United States Government.

And I also want to thank Ambassador Coppedge for her 16-year career devoted to this issue. (Applause.) And I also know she doesn’t do this alone, and we’re grateful to her staff and also the many, many State Department colleagues at our embassies and our consulate offices who both help with the preparation of this report, but I think more importantly, they encourage governments to progress their efforts to combat human trafficking every day in our engagement with them.

I also want to welcome ambassadors and representatives from the foreign diplomatic corps. Our partnership with you, obviously, is essential to combating human trafficking as well.

And finally, I want to recognize the survivors of human trafficking as well as representatives of the many NGOs and international organizations who are with us today, and thank you for being here for this rollout of this report.

I think before I get to some of my prepared remarks, it’s – since this was my first one of these to review and sign off on and make the report, I thought it useful to go back and read the original reason why we do this. This is the Victims of Trafficking and Violence Protection Act of 2000, and that’s really where this all began. And I think it is useful to remind us why we’re here this morning, why we’re gathered in this room, and what the United States Government and the people of the United States were really trying to express in this area.

And I think if you go back to the preamble to this act, I think it really sums it up well. It says, “The purpose of this act is to combat trafficking in persons, a contemporary manifestation of slavery, whose victims are predominantly women and children, to ensure just and effective punishment of traffickers, and to protect the victims.” And then it – I want to read just one more line: “As the 21st century begins, the degrading institution of slavery continues throughout the world.”

That is why we are here this morning. It then does – the act goes on to require that the State Department prepare this annual report to make an assessment of how governments around the world are taking action to address this. And I think it’s really through actions what this act motivated and what the State Department is doing as it meets its obligation, is we’re identifying first where the problems are: how do the problems manifest themselves – because they continue to evolve and take on new characteristics; how do we then work with governments to cause them to put in place laws that allow them to then pursue those who participate in these various forms of human trafficking; how do we encourage governments to enforce those laws and actually begin to hold people accountable; and lastly, how do we create the conditions where the victims or the potential victims of human trafficking are able to come forward in a non-threatening way and help us understand better how this is occurring.

And it’s really the results of what we do that matter. The report is an important tool to help us understand and help us help other governments understand, but the end of it – it’s the individual, it’s the victim, and our ability to prevent others from being victimized.

Human trafficking is as old as humankind. Regrettably, it’s been with us for centuries and centuries. But in the expression of this act, as I read that one line to you, it is our hope that the 21st century will be the last century of human trafficking, and that’s what we are all committed to. Regrettably – (applause).

So let me now make a few comments on the report and why it’s so important. Obviously, the consequences of our failure to act in this area has so many other negative impacts around the world: it breeds corruption; it undermines rule of law; it erodes the core values that underpin a civil society. Transnational criminal networks also – whether they be drug dealers, money launderers, or document forgers – are partly enabled by participating in human trafficking activities as well.

When state actors or nonstate actors use human trafficking, it can become a threat to our national security.

North Korea, for instance, depends on forced labor to generate illicit sources of revenue in industries including construction, mining, and food processing. An estimated fifty to eighty thousand North Korean citizens are working overseas as forced laborers, primarily in Russia and China, many of them working 20 hours a day. Their pay does not come to them directly. It goes to the Government of Korea, which confiscates most of that, obviously.

The North Korean regime receives hundreds of millions of dollars per year from the fruits of forced labor. Responsible nations simply cannot allow this to go on, and we continue to call on any nation that is hosting workers from North Korea in a forced labor arrangement to send those people home. Responsible nations also must take further action. China was downgraded to Tier Three status in this year’s report in part because it has not taken serious steps to end its own complicity in trafficking – including forced laborers from North Korea that are located in China.

American consumers and businesses must also recognize they may have an unwitting connection to human trafficking. Supply chains creating many products that Americans enjoy may be utilizing forced labor. The State Department does engage with businesses to alert them to these situations so that they can take actions on their own to ensure that they are not in any way complicit.

Most tragically, human trafficking preys on the most vulnerable, young children, boys and girls, separating them from their families, often to be exploited, forced into prostitution or sex slavery.

The State Department’s 2017 Trafficking in Persons Report exposes human trafficking networks and holds their operators and their accomplices accountable.

The focus of this year’s report is governments’ responsibilities under the Palermo Protocol to criminalize human trafficking in all its forms and to prosecute offenders. We urge the 17 countries that are not a party to the international Protocol to Prevent, Suppress, and Punish Trafficking in Persons to reconsider their position and to join the other countries who have made that commitment.

The 2017 TIP Report also emphasizes governments must put forward tougher anti-corruption laws and enforce them, so that traffickers do not get a free pass for those who choose to turn a blind eye.

Importantly, nations must educate law enforcement partners on how to identify and respond to those who dishonorably wear the law enforcement uniform or the military uniform by allowing trafficking to flourish. The most devastating examples are police officers and those who we rely upon to protect us, that they become complicit through bribery, by actually working in brothels themselves, or obstructing investigations for their own profit. Complicity and corruption that allows human trafficking from law enforcement officials must end.

We know shutting down these networks is challenging. But these challenges cannot serve as an excuse for inaction.

The 2017 TIP Report also recognizes those governments making progress. We want to give them credit for what they are doing. Last year, governments reported more than 9,000 convictions of human-trafficking crimes worldwide, up from past years.

Just to mention a few highlights:

Last July, the president of Afghanistan ordered an investigation into institutionalized sexual abuse of children by police officers, including punishment for perpetrators. In January, a new law was enacted criminalizing bacha baazi, a practice that exploits boys for social and sexual entertainment. The government continues to investigate, prosecute, and convict traffickers – including complicit government officials.

In the Ukraine – a country that has been on the Watch List for years – the office of the prosecutor general issued directives to improve investigations of trafficking, and increased efforts to root out complicity, including convictions of police officers. A teacher at a government-run school, a government-run boarding school for orphans, has been arrested for trying to sell a child. And officials are now on notice that complicity in trafficking will be met with strict punishment.

In the Philippines, increased efforts to combat trafficking have led to the investigation of more than 500 trafficking cases and the arrest of 272 suspects – an 80 percent increase from 2015.

Given the scale of the problem, though, all of these countries, and many more, have much to do. But it is important to note their progress and encourage their continued commitment.

As with other forms of illicit crime, human trafficking is becoming more nuanced and more difficult to identify. Much of these activities are going underground and they’re going online.

The State Department is committed to continuing to develop with other U.S. agencies, as well as our partners abroad, new approaches to follow these activities wherever they go and to train law enforcement to help them improve their technologies to investigate and prosecute these crimes.

To that end, I am pleased to highlight a State Department initiative announced earlier this year.

The Program to End Modern Slavery will increase funding for prosecution, protection, and prevention efforts to reduce the occurrence of modern slavery wherever it is most prevalent. The program is the result of the important support of Congress, especially from Chairman Corker, and other leaders committed to bringing more people out from under what is a crime against basic human rights.

The Program to End Modern Slavery will fund transformational programs but also set about to raise commitments of $1.5 billion in support from other governments and private donors, while developing the capacity of foreign governments and civil society to work to end modern slavery in their own countries.

As we reflect on this year’s reports and the state of human trafficking the world over, we recognize those dedicated individuals who have committed their lives – and in some cases put their lives at risk – in pursuit of ending modern slavery. For many victims, theirs is the first face of hope they see after weeks or even years of fear and pain.

The 2017 TIP Report Heroes will be recognized formally in just a few minutes, but I want to thank them and express my own admiration for their courage, leadership, sacrifice, and devotion to ending human trafficking. (Applause.)

As we honor these heroes, we remember that everyone – everyone – has a role to play. Governments, NGOs, the private sector, survivors, and, most of all, the American people all must continue to work together to make human trafficking end in the 21st century.

And now please join me in welcoming an advocate for ending human trafficking, and someone who is doing a great deal to raise the profile of this issue, Advisor to the President of the United States, Ms. Ivanka Trump. (Applause.)