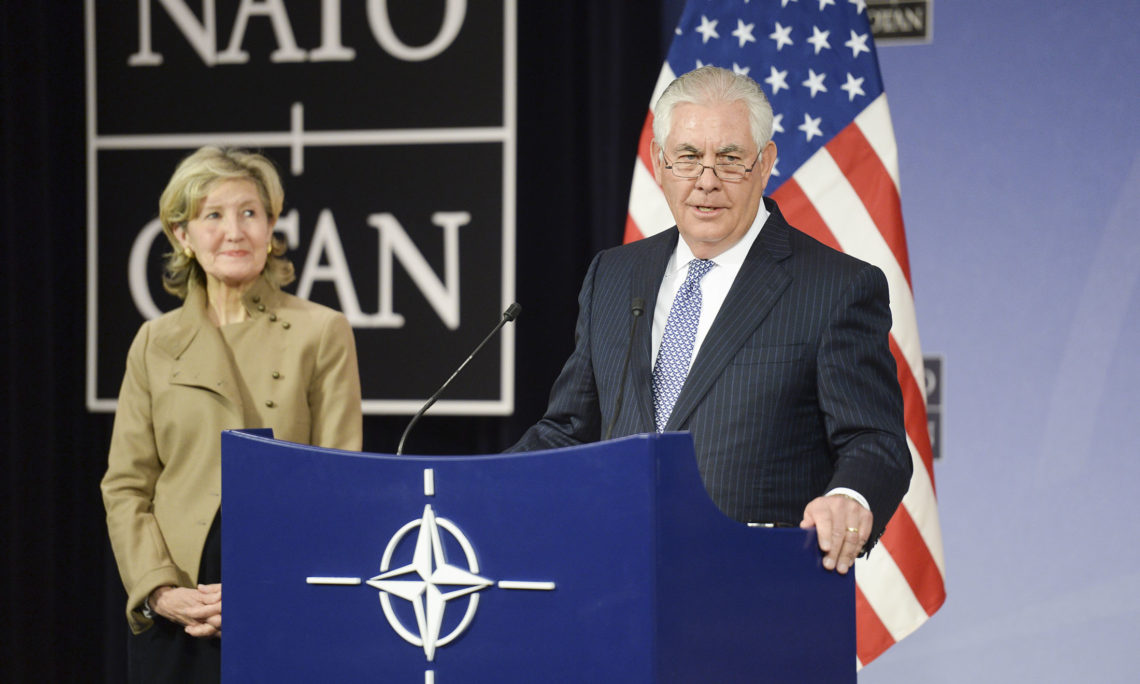 Secretary of State Rex Tillerson visited NATO Headquarters during his travels this week to Belgium, Austria, and France.  On December 6, 2017, he spoke at a press conference in Brussels.

SECRETARY TILLERSON: Well, good afternoon, all. It truly is a pleasure to be back in Brussels. Someone reminded me this is my seventh trip to Europe already this year. But it is great to be back. I had a great visit with our tri-mission here in Brussels. These are the people who represent America’s interests here at NATO, but it – with the EU and here in Brussels, as well. Really working hard. And had a chance to meet their newest member of their family, a two-week-old son that was born to one of our folks that’s located here from the U.S.

And, of course, to be with Ambassador Hutchison, who is – who I’ve known for a very long time, and we have a very deep and strong friendship and a deep respect for one another, in terms of her service in the United States Senate for so many years, and really proud that she leads our NATO mission here, as well.

The United States, obviously, I think has affirmed now on multiple occasions our support for NATO’s mission. We know that the security NATO provides protects Western democratic principles, protects our right to live in freedom. To that end, the United States is eager for our NATO allies to exert their sovereignty and take on greater responsibility for our shared deterrence and our defense burden. I think, as each of us contributes, the better we will be able to deter and defend against the threats on Europe’s frontiers, which also can become threats for America.

We do commend the many countries that have made additional commitments and greater contributions. This year Romania joined the United States, Greece, Estonia, the United Kingdom, and Poland as six allies that spend at least two percent of their GDP on defense. And two more allies, Latvia and Lithuania, will join that club in 2018. We expect 26 allies will increase their defense spending budgets this year and five more NATO allies have put plans in place to achieve the 2 percent objective by 2024.

Increased spending, however, is not enough. It is really about increasing capabilities. And we’ve spent a lot of time in the sessions here at NATO over the last day-and-a-half talking about that. It is interesting, since NATO was formed the single largest cause of loss of lives within NATO from threats has been terrorism. And I think President Trump, as all of you well know, has made it clear that stopping terrorism must be a growing focus of attention for NATO. And we had just completed a session on the subject.

Yesterday we discussed how to further leverage the action plan to strengthen the allies’ resilience against terrorist attacks and, in particular, to build upon NATO’s already long-standing commitments in Iraq and Afghanistan, increase their cooperation as the President has announced his new South Asia strategy. We appreciate NATO members’ commitments to the United States effort to defeat ISIS globally, as well as our other counterterrorism efforts.

The original mission of NATO, obviously, is still relevant. We have been clear with Russia that we cannot return to business as usual in the NATO-Russia relations, as long as Russia continues its illegal occupation of Ukraine. And Russia’s continued use of hybrid warfare seeks to undermine Western institutions, and this stands as a significant obstacle to normalizing our relations, as well.

Russia’s aggression in Ukraine remains the biggest threat to European security, and demands continued transatlantic unity in confronting that threat. Our NATO allies stand firm in our support of Ukraine’s sovereignty and their territorial integrity. We do not accept Russia’s efforts to change the internationally-recognized borders of Ukraine or recognize Russia’s illegal occupation of Crimea.

Earlier this morning we also had a productive discussion with Georgian Foreign Minister Janelidze. Georgia is a large contributor to our joint efforts in Afghanistan. In fact, they are the largest per capita of any contributing nation, and we strongly support Georgia’s aspirations to become a NATO member.

Looking ahead to our final session, which will be over lunch today, the United States does support NATO’s open-door policy, and our commitment that any Europe-Atlantic country that wishes to join the alliance and meets the requirements to do so should be allowed to do so. And no third party should have anything to say about that pursuit of NATO membership.

To read the the text of questions and answers that followed please click here.