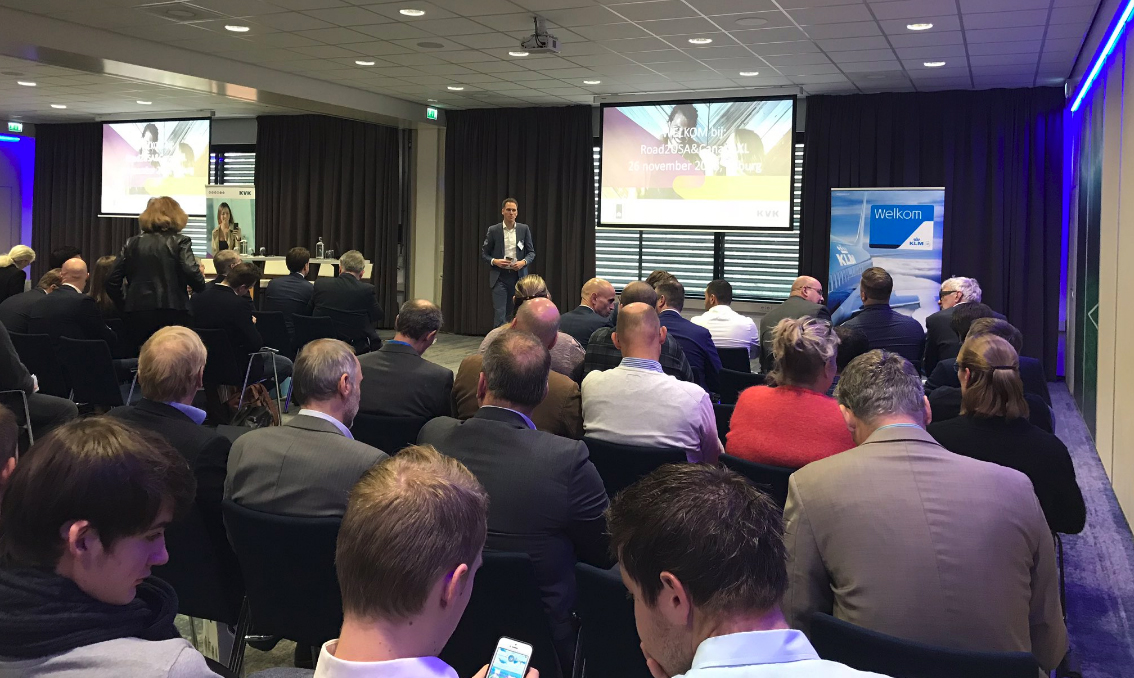 On November 26, 2018, Chargé d’Affaires Shawn Crowley gave opening remarks at the Road2USA and Canada event, which was organized by the Dutch Chamber of Commerce and the Ministry of Economic Affairs and Climate Policy. The event was held at the Willem II Stadium in Tilburg and promoted doing business in the United States and Canada.

The audience consisted of a group of approximately 120 Dutch companies, which are either already active or want to become active in the United States and/or Canada. The U.S. Embassy will lead a delegation of Dutch companies interested in expanding to the United States to the 2019 SelectUSA Investment Summit. If you would like to learn more about starting or expanding your business in the U.S., this is the Summit you don’t want to miss. Meet federal government representatives from different departments, including Commerce, Transportation, Energy, Health, and others, and representatives from all 50 States who can inform you about the latest trends, opportunities, and incentives. The Summit takes place from June 10 to 12 in Washington, DC. For more information, please email us or visit www.selectusasummit.us

Also in attendance and giving remarks was the Ambassador of Canada to the Kingdom of the Netherlands Sabine Nölke. Following are the remarks by Chargé d’Affaires Crowley:

Wat fijn om weer in Brabant te zijn. Veel Brabantse bedrijven zijn al actief in Amerika en ik hoop dat jullie in hun voetstappen treden. I’m delighted to see so many of you at this seminar on expanding your business in North America. I would like to thank the organizers and the Ministries of Foreign Affairs and Economic Affairs for today’s event and for the continued support over the past years.

The Dutch government does a commendable job in helping U.S. companies expand in the Netherlands, and we would like to do the same for you in the United States. I hope that our time here will answer any questions you have about business in my country and lead to even more investments in the United States.

While Canada is a good friend, the United States-Netherlands partnership is our longest unbroken, peaceful relationship with any country in the world. Our close economic ties are not only good for business, they are key to the prosperity of both the American and Dutch people. More than 2,700 U.S. companies directly employ around a quarter of a million workers here and generate almost five percent of Dutch GDP.

The Netherlands is our eighth largest goods-export market and historically the third-largest foreign investor in the United States, supporting over 800,000 American jobs. Prime Minister Rutte told the President in July that he hopes to expand that figure to one million in the near future. I hope you all can help him achieve that goal.

I encourage you to speak with companies that are already active in North America to learn from their journeys. I encourage you also to contact my colleague Philip Hammerstein about SelectUSA and other programs that help foreign investors in the U.S. market. The Embassy will lead a delegation of Dutch companies to the next SelectUSA summit in Washington June 10-12.

The event allows businesses to meet representatives from all 50 U.S. states in one location, so please consider registering if the program meets your needs.

Another exciting opportunity for the entrepreneurs and investors among you is the upcoming Global Entrepreneurship Summit. The 2019 summit will be co-hosted by the Netherlands and the United States. The June 4-5 event in The Hague will convene entrepreneurs, innovators, and investors to showcase the power of
small- and medium-enterprises around the world. The Summit this year will focus on food and agriculture, water, health, infrastructure, and connectivity–including cybersecurity.

Now is a good time for the U.S. and Canadian economies. Americans are shopping and businesses are investing. Consumer confidence is the highest since 2000, unemployment is the lowest in nearly two decades, and we are adding new jobs every month. Economic growth is strong and is expected to accelerate as a result of the recent tax stimulus measures.

Both the United States and Canada rank among the most attractive business locations in the world. I hope today’s presentations and discussion will give you valuable insights into how to expand across North America.

Please do not hesitate to reach out to our Embassy staff if you need any assistance. Thank you again and I wish you a very informative day.”