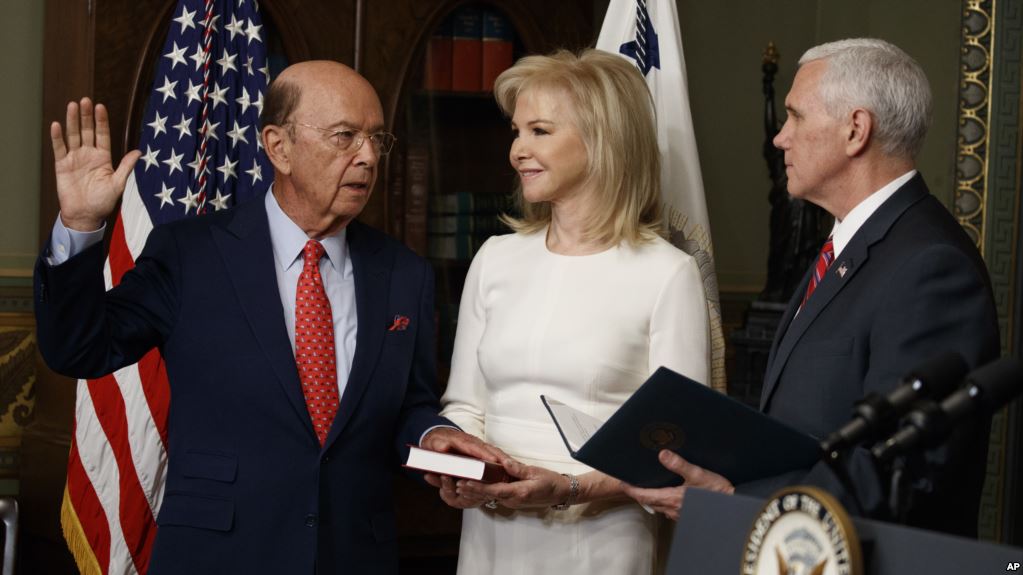 THE VICE PRESIDENT:  Good morning.  Thank you for joining us.  On behalf of the President of the United States, it’s my great privilege to administer the oath of office to a man who will become the 39th Secretary of Commerce for the United States of America, Wilbur Ross.

Since this department was founded in 1903, the position of Secretary of Commerce has been filled by many distinguished Americans, and Wilbur Ross’ addition to those rolls is fitting and appropriate given his extraordinary career and the integrity and the ability that he brings to lead the Department of Commerce.

We are also joined today by his wife, Hilary, and you could give her a round of applause.  We appreciate a commitment of public service is a commitment of families.  And we are grateful to both of you for your dedication to the United States today.

Also pleased to be joined by many friends and associates, as well as the future Deputy Secretary of Commerce, Todd Ricketts.  So thank you all for being here today.

President Trump used to say on the campaign trail that he had a three-part agenda for the American economy:  Jobs, jobs, and jobs.  And with Wilbur Ross as our new Secretary of Commerce, the President and I are confident that the Department of Commerce is going to take its right and leading role in fostering the growth that will create good-paying jobs for every American.

And, Wilbur, you’re well-suited for this task.  You established yourself as a leading American businessman in a career that spans over 40 years — incredible number of fields and industries.  You understand the American economy because you’ve participated in so many different parts of it with such great success.  From steel to textiles, from energy to manufacturing, you have firsthand experience with the building blocks of the American economy.  You’ve also seen for yourself the struggles that American workers can face in difficult times.  And your stewardship of companies — one after another — have time and again saved thousands of jobs and put those companies and firms in a position to survive and thrive in the years ahead.  It is a credit to your ability and to your dedication to the American worker.

Now President Trump has called on you to serve your country as Secretary of Commerce.  And given your decades of experience, your record of leadership, your integrity, and your commitment to protecting America’s economic future, President Trump and I have full confidence that you will succeed.  And when you succeed as Secretary of Commerce, you will help America succeed to a more prosperous future.

Now on behalf of President Trump, it’s my great privilege to administer to you the oath of office.

THE VICE PRESIDENT:  Ladies and gentlemen, the Secretary of Commerce, Wilbur Ross.

SECRETARY ROSS:  Thank you, Mr. Vice President.  And thanks to all of you — friends and supporters and people from the department — for coming here today.

I’m very gratified at the confidence that the President and the Vice President have shown in me and in the department.  And I promise I’ll live up to every word that I just said.

I was also very gratified last night with the vote being 72 to 29 because that suggests that perhaps finally building America up again may become a bipartisan thing rather than contentious.

And I hope that spirit will carry over as people deal with the results of the State of the Union message tonight.

So I thank you very much.  Now let’s get to work.