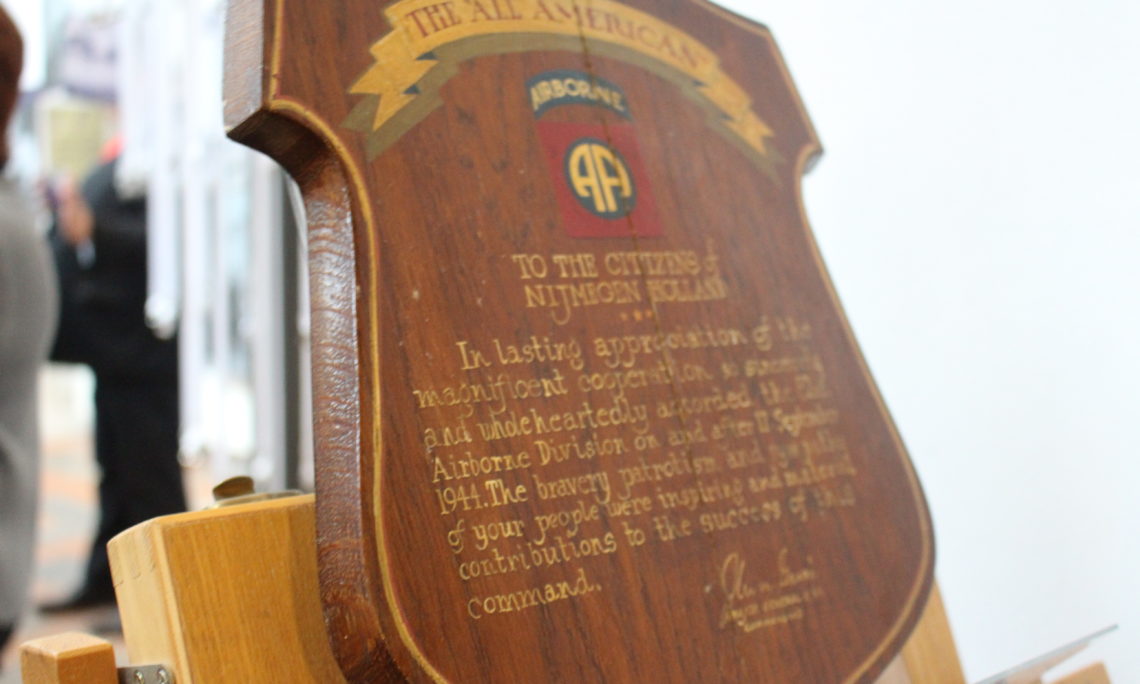 Shield given to the citizens of Nijmegen by General Gavin.

Good afternoon. Thank you, Mayor Bruls, for welcoming us once again to your beautiful city. Thank you as well, Mayor Sheehan, for making the trip all the way from Albany. I would like to acknowledge the presence of General Gavin’s family. I recognize the outstanding work of Stichting FAN, as well as all the citizens of Albany and Nijmegen who promote Dutch-American relations and keep the memory of our alliance in World War II alive. Most importantly, I want to give a special welcome and thanks to our veterans in the audience and their families. Today, 82nd Airborne veteran Robert DeVinney celebrates his birthday with us.
Rebecca Hanna is also here representing her father Roy, who was among those courageous men who crossed the Waal River 73 years ago. Rebecca, please let your father know we are with him in spirit, and we wish him a swift recovery.

Today we celebrate 70 years of friendship between Albany and Nijmegen. Our nations share deep bonds that go back much further. Albany is one of the oldest surviving European settlements in North America and thus a fitting sister city to Nijmegen, which is one of the oldest in the Netherlands.

More than three centuries after Henry Hudson’s historic journey westward, America’s sons returned to Europe to help liberate the Netherlands and defeat Nazi Germany. Every school child in this city knows what took place on September 20, 1944, when men of the 3rd Battalion, 504th Parachute Infantry Regiment, and other units, crossed the Waal River. In fact, the Oversteek School, which I will have the pleasure of visiting in a few days, dedicates time each year to remembering that day. I cannot think of a more beautiful tribute to the brave men who fought and died here than the annual renewal of their memories by the next generation of Dutch youth.

It is important to note that America’s liberators did not forget about Nijmegen after the war. I understand it was General Gavin who suggested that the city of Nijmegen be adopted by Albany.

The citizens of Albany answered the call. Schools, churches, historical associations, scouts, and service clubs all contributed to the Albany Aid Campaign. They sent 300 tons of supplies to Nijmegen aboard the SS Westerdam, including food, clothing, and building materials. The spirit behind this donation can still be seen throughout the United States today, as people assist the victims of the recent hurricanes.

I am proud to say that, with modest support from the U.S. Embassy, Stichting FAN and Anja Adriaans will bring the Albany-Nijmegen story to light via a short documentary called “Out of Sight,” which is scheduled to premier later this year.

The Westerdam was not the only ship carrying U.S. assistance to Europe in 1947. This year we also celebrate the 70th anniversary of the Marshall Plan. U.S. taxpayers provided almost 13 billion dollars in aid to Europe from 1947 to 1952, including 1 billion dollars to the Netherlands. In the end, this country received more assistance per person than any other EU nation, aid worth more than $1,700 per capita today.

The Marshall Plan restored confidence and set the stage for an unprecedented era of prosperity, peace, and cooperation in Europe. This weekend, as we honor those who fought and died for the liberation of the Netherlands, it is also important to also remember the legacy that has been built after the war. Today, as we face new threats and uncertainties, we must do our part to ensure this cooperation and friendship continues.

In America we have a saying that I believe you also have in Dutch: “Wij zijn vrienden door dik en dun.” Nothing illustrates that more than the friendship between Albany and Nijmegen. Thank you.