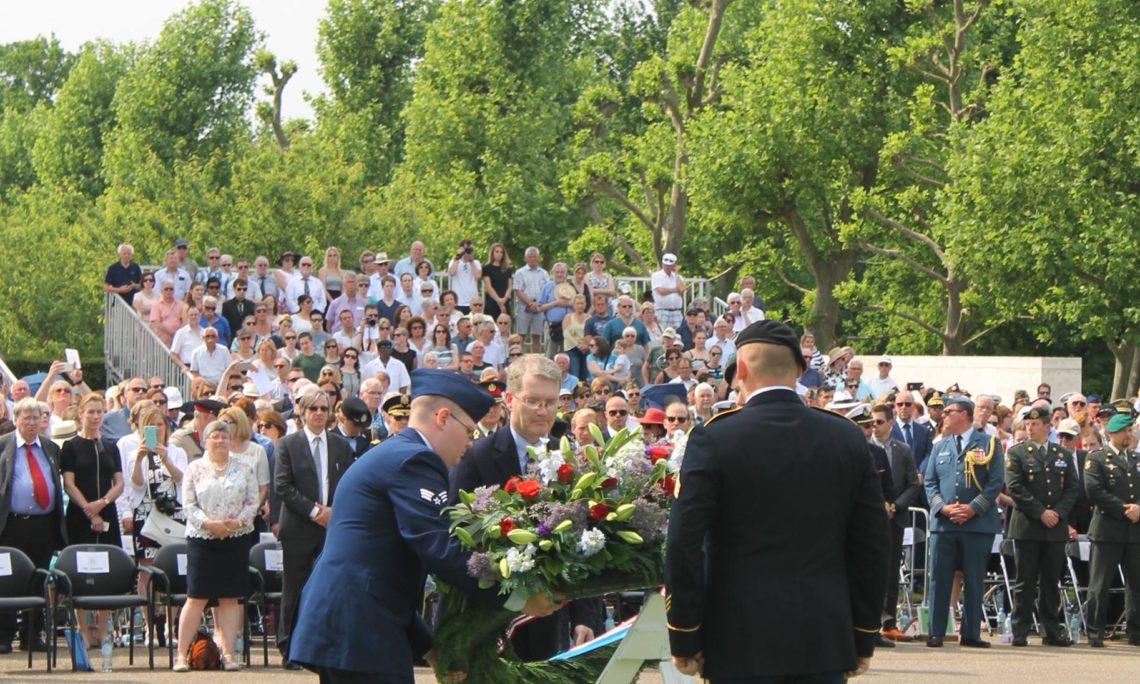 As the grandson, son, and brother of veterans, it is a great honor for me to speak at the annual Memorial Day ceremony. I would like to express my deepest appreciation to the members of the armed services here today–Dutch, American and Allied–as well as our veterans and their families. I commend our host, the American Battle Monuments Commission, who continue to ensure that time will not dim the glory of the deeds of those remembered here. Their efforts are assisted by the thousands of Dutch citizens who for decades have adopted the graves, tended the memories, and taught their children that freedom is not free. I know of no other nation in the world that does this. Ik dank u namens het amerikaanse volk en uit het diepst van mijn hart.

On Memorial Day, we should remember that every one of the fallen was a unique individual, with their own families, hopes, and dreams. Second lieutenant Burton Phillipson, buried here under a Star of David, was one of those. Originally from Chicago, Burton moved to Albuquerque after marrying Jo Ellen Spiller. He had hoped to serve in a bomber squadron, but switched to the glider program when he had problems with higher altitudes. As part of a Troop Carrier Group working with the 101st and 82nd Airborne divisions, he participated in D-Day, as well as Operations Dragoon, Market Garden, and Varsity. On March 24, 1945, Burton was killed in Germany soon after successfully landing his glider. He still lies here in the Netherlands, in plot E, row 5, grave 16. He left behind his young wife and a five-month old son, Robert Reid. His grave was adopted by a Dutch family that had hidden a young Jewish girl during the Nazi occupation. After they passed away, the grave was adopted by Bert and Iris Schrouff-Bertrand and their family, who tend it to this day. I know this story because Burton was the grandfather of one of my coworkers in Kosovo, Jean Phillipson. Jean and her parents have said they cannot express sufficiently their appreciation and love for the great Dutch families who have so willingly taken on this important responsibility.

The sacrifices of the fallen taught us that defending our common values requires investments of both blood and treasure. This is a lesson we must never forget.

The United States has not forgotten. We are honored today by the presence of NATO’s Supreme Allied Commander Europe, General Scaparotti. We have U.S. troops serving in several locations in the Netherlands. To ensure that future generations do not forget, the American Battle Monuments Commission has begun planning for a new a visitor center here in Margraten.

Your presence here today, and the commitment of the Dutch armed forces represented by General Middendorp, show that the Netherlands has not forgotten, either. We appreciate your assistance with reopening the Army Prepositioned Stock site in Eygelshoven, your leadership of exercises in Poland, and your deployments to Lithuania. We greatly value your help in counterterrorism operations and peacekeeping in Iraq, Afghanistan, Mali, and around the world. We were glad to see that NATO leaders again agreed to provide the resources necessary to ensure that these capabilities are modernized and available to meet evolving threats. We honor the fallen by doing our part — all of us — to keep our citizens safe and secure. Thank you.