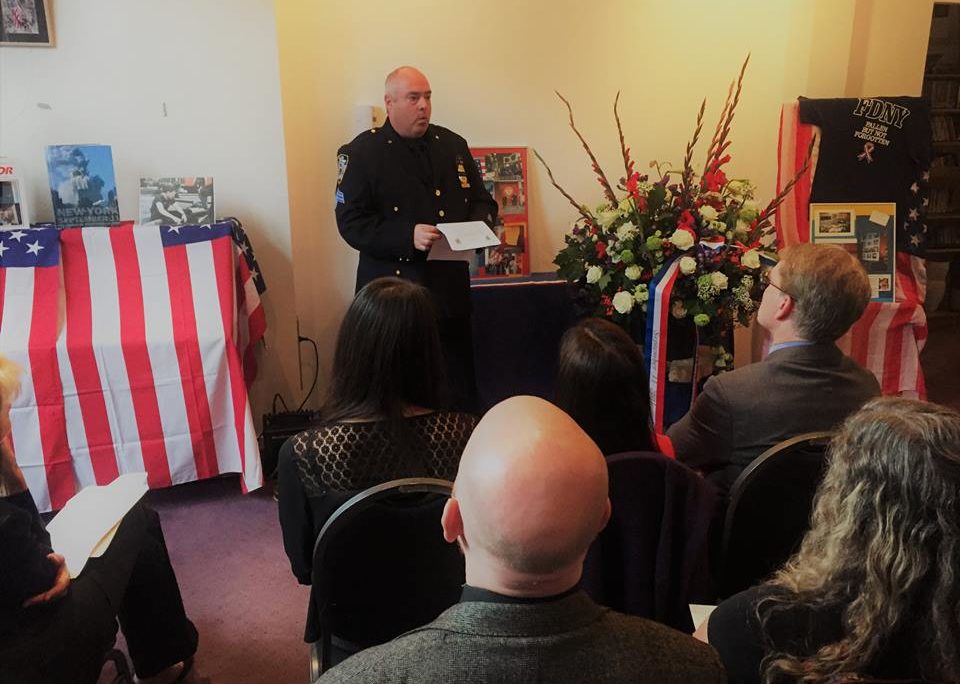 NYPD veteran James Hines shares his memories of working at the World Trade Center on September 11, 2001.

Overseas Americans Remember (OAR) organized the annual 9/11 Memorial in The Hague on September 11, 2017.  Charge d’Affaires Shawn Crowley gave remarks, along with this year’s guest of honor, Sgt. James Hines, a 25-year veteran of the NYPD, who was at the World Trade Center 16 years ago.  The program featured music, readings, and a minute of silence.  The names of 12 firefighters from FDNY Squad One in Brooklyn were also read.  The American community in The Hague raised money and collected toys for the children of the firefighters of Squad One who died September 11.  They left behind 10 wives and 27 children.

Thank you for your invitation to share once again my experiences from September 11th.  The President has declared September 11 as Patriot Day.  The proclamation notes that on this day, we honor the nearly 3,000 innocent lives taken from us, and all of those who so nobly aided their fellow citizens in America’s time of need.  We rededicate ourselves to the ideals that define our country and unite us as one.

Since we last gathered, new towns and cities have been added to the lexicon of terror:  Berlin, Istanbul, Stockholm, London, Paris, Manchester, and Barcelona are just a few in Europe.  There have been dozens of attacks in Pakistan, Iraq, Iran, and Afghanistan in the last twelve months.  Each attack, each death, reminds us of the scourge of terrorism and the importance of vigilance and partnership.

September 11th and the more recent violence in Europe were not just attacks against nations, but on our shared values of tolerance, diversity, and democracy.  We welcome the valuable contributions and sacrifices that our friends in the Netherlands have made in our joint effort to counter extremism.  Prime Minister Rutte once said that what he remembered most about 9/11 was the determination of everyone that the terrorists must not be allowed to win.  We remain united in this goal.

As I noted last year, I was in Berlin on September 11, 2001.  I learned that day that my youngest brother and his friends had been at the World Trade Center just the night before.  The next day, he discovered the place he had left just a few hours before was on fire and crumbling to the ground.  As a result of that experience, he enlisted in the army, where he was wounded in Iraq.

Back in Berlin, I was overwhelmed by the outpouring of support from the German people.  At a time when it would have been easy to despair about man’s seemingly endless capacity for cruelty and violence, I was astonished by the empathy and unbridled kindness of complete strangers.

On September 11, 2012, I was on my way back to the U.S. mission in Benghazi, Libya.  I would also like to take this opportunity to remember my friends Ambassador Chris Stevens, Sean Smith –who was assigned here in The Hague, Tyrone Woods, and Glen Doherty, who lost their lives that day.

As many of you know, our Embassy is preparing for our move to Wassenaar in the coming months.  Like any move, we are trying to get rid of as much as possible.  We will keep, however, every one of the thousands of cards, letters, drawings, and photographs sent by the Dutch people following 9/11.  Over the past week, we highlighted some of these items on our Embassy social media.  One item that stuck out to me was a poem by a small boy, written in Dutch and tied to this small stuffed animal.  Roughly translated, the poem says:

“America has had the largest disaster.  Airplanes have flown into tall buildings.  Many have died.  I find this very serious and it makes me very sad.  Therefore, I am giving you a beautiful drawing I made, with a stuffed animal, too.  I hope that they will make you happy and that all will be well again.”

There is something incredibly innocent in this poem, and it is something that I hope children everywhere never lose.

After September 11th we saw the best in the American character and in the character of our real friends and allies.  We see that again today in the aftermath of the devastation wrought by the recent hurricanes.  These images bring back the emotions I felt after September 11, 2001.  Sadness for the loss, worries for the future, but pride most of all in the American spirit.  Thank you.