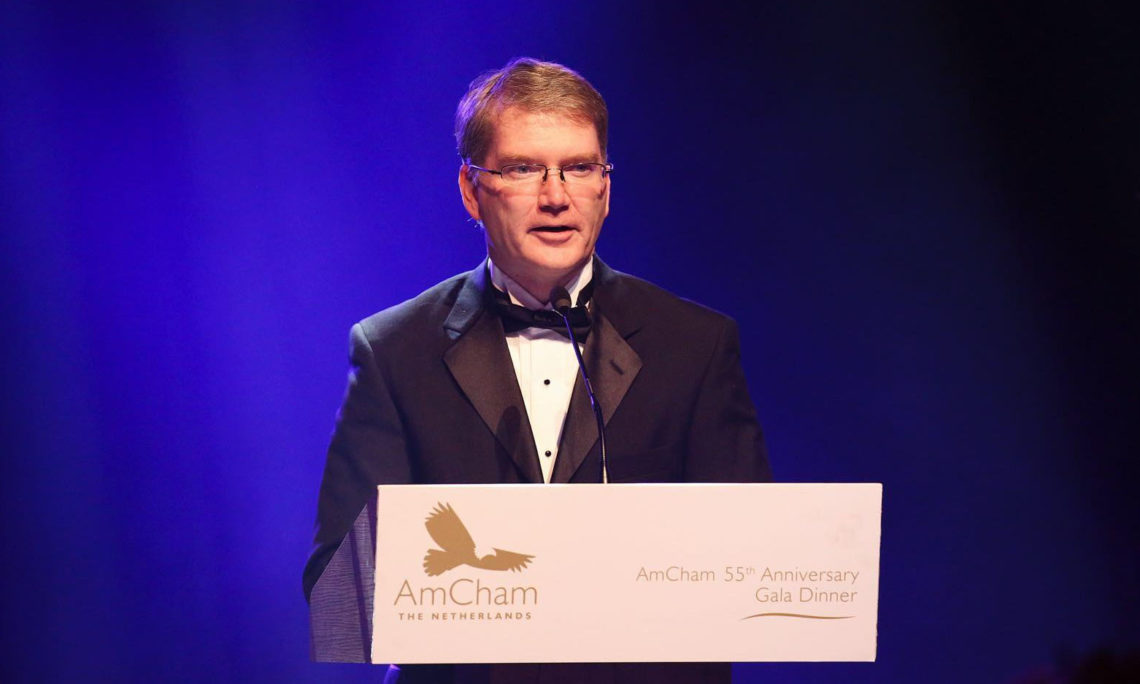 It is my pleasure to congratulate the American Chamber of Commerce in the Netherlands on its 55 years of service to the business community.

Though much has changed in the past half century, indeed in the past half year, AmCham has remained a constant motor of prosperity for American companies and for the Netherlands.  The work of the Chamber is essential to maintaining the strong trade and investment ties between our two nations.

The American Embassy is proud to be a partner of one of the largest international business organizations in this country.  I was pleased to accept honorary membership on AmCham’s board as one of my first official acts last year.  On behalf of the U.S. Government, I would like to recognize the Chamber’s strong commitment to economic cooperation, investment, and exchange activities under the leadership of Wouter Paardekooper and Patrick Mikkelsen.

The United States is the largest investor in this country, and we want to keep it that way.  The Dutch statistical office CBS recently reported on the significant contribution foreign firms make to the Dutch economy.  The 2,725 U.S. companies in the Netherlands represent only 0.25 percent of the total number of firms active in the Dutch business economy.  They nevertheless directly employ 214,000 workers, or almost five percent of the total private-sector workforce in the country, and that number rises to 450,000 if you include indirect jobs.

In 2014, U.S.-owned firms generated €28 billion in added value from their activities, which translates to over four percent of Dutch GDP.  The value added to the Dutch economy by U.S. companies easily surpassed all other foreign states, even the regional heavyweights Germany and France.

On Friday we celebrated the inauguration of our 45th President in Washington.  The new President is committed to strong economic growth and the promotion of U.S. businesses both at home and abroad.  He has announced his intention to create 25 million new jobs in the next decade and return to four percent annual economic growth.  He has indicated that the plan will include tax reform, a moratorium on new federal regulations restraining business, and negotiation of the best possible trade deals.

I am often asked what the election in the United States means for the Netherlands.  Wouter has correctly recommended “laten we nu eerst maar eens afwachten wat er echt gaat gebeuren in Amerika.”  While I have no crystal ball, we should not expect significant changes in our bilateral economic relations.  Our partnership is mutually beneficial to both countries.  The flip side of the Chamber’s work here is that the Netherlands is the third-largest investor in the United States.  According to the Dutch government, that investment has supported over 700,000 American jobs.  The United States strongly values these contributions.

We know our ties remain strong.  The Netherlands was one of the first allies of the United States and we have been there for each other for nearly 250 years.  We are committed to working with our Dutch friends towards a more secure energy future, increased prosperity, and international peace and security.

Throughout its long history, AmCham has been a catalyst for improved trade and investment relations between the United States and the Netherlands.  The Chamber is well-known and respected by the Dutch government, media, and opinion makers, who pay close attention to AmCham’s policy recommendations, especially the annual Investors’ Agenda of Priority Points.  AmCham derives its strength from you, its members, and also from the hard work of the many volunteers serving on its committees.

I offer a hearty congratulations to the AmCham and look forward to your next 55 years.  Thank you.