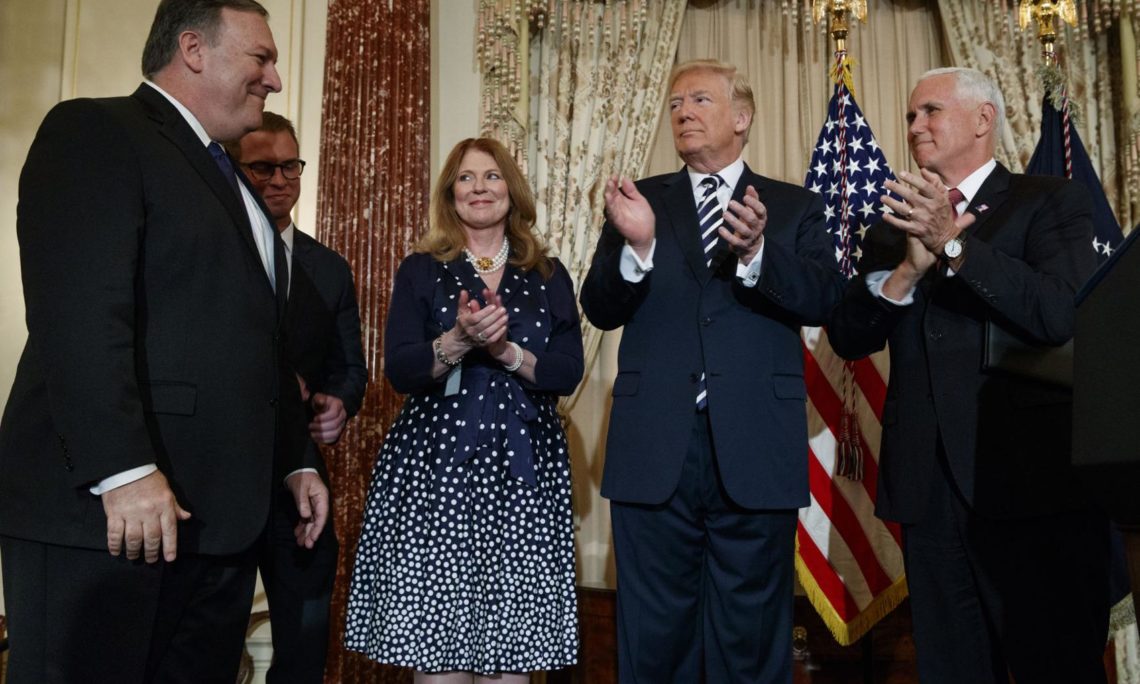 President Donald Trump applauds Secretary of State Mike Pompeo during a ceremonial swearing in at the State Department, Wednesday, May 2, 2018 (AP Photo/Evan Vucci)

THE PRESIDENT:  Thank you.  I must say, that’s more spirit that I’ve heard from the State Department in a long time — many years.  (Laughter.)  We can say many years, and maybe many decades.  It’s going to be a fantastic start, a fantastic day.  And that spirit will only be magnified, will only — with this man right here.  I know that for a fact.

So thank you all for being here.  It’s great to be with you, the extraordinary men and women of the State Department.  We are profoundly grateful for everything you do for our country.  And you’ll be doing things that you don’t even know about.  (Laughter.)  Right now, they’re not even a glimmer in your eye.  And we have a couple going, Mike, right now, that a lot of people don’t know about that are very, very encouraging.

I also want to thank Vice President Pence and the many members of my Cabinet for joining us this morning.

We’re here to celebrate the swearing-in of America’s new Secretary of State, Mike Pompeo.  Mike.  (Applause.)  This day is a testament to your exceptional skill, Mike — a skill and service that’s been honed over a lifetime, no matter where you went.

We’re joined by Mike’s wife, Susan, and his son, Nick.  And I want to thank you both for sharing this wonderful moment with us all.  Thank you very much.  Thank you.  (Applause.)

Mike is a true American patriot.  He has devoted many years of his life to defending America, beginning when he entered West Point.  And as you all heard, he entered at 18 and he ended up graduating first in his class.  You know, I heard that rumor a long time ago.  I thought it was a rumor of — I don’t know.  You know, you hear “first.”  (Laughter)  And I’ve heard it so many times.  I’ve also heard I was first in my class at the Wharton School of Finance.  (Laughter.)  And sometimes when you hear it, you don’t say anything.  You just let it go.  (Laughter.)

But I heard it with him.  And being first in your class at West Point — because I know, that’s a big deal.  So I said, “Is that true?”  “Yeah.”  I asked a few other people, “Is that true?”  “Yes.”  So I started bringing it up.  I brought it up about four weeks ago, right David?  And after that, everybody brings it up.  So I don’t have to say it anymore.  (Laughter.)  He was actually first in his class at West Point.

And soon he was deployed to Germany, where he served a cavalry officer prior to the fall of the Berlin Wall.  After leaving active duty service, Mike graduated from Harvard Law School with high honors.  Great student.

Mike was elected to Congress in 2010 by the people of the 4th District of a great state: Kansas.  Right?  (Applause.)  It is.  In the House, he distinguished himself as a member of the Intelligence Committee.

For the last 15 months, Mike served as our nation — and served our nation as the Director of the Central Intelligence Agency, where, I can tell you, they have such respect for him.  It’s unbelievable.  They may be the only people that are not very happy right now.  But they’ll be happy.  (Laughter.)  They’ll be happy with our Gina, who’s here today.  And his exceptional leadership of the CIA earned the admiration of his colleagues in the Cabinet, the Congress, the intelligence community, as well as our foreign allies and partners.

Mike has also earned my deepest respect and admiration and trust.  And you’ll see why over the coming years.  Probably, over the coming months.  I have absolute confidence that he will do an incredible job as the nation’s 70th Secretary of State.

As Mike travels the world, he will carry out the greatest mission and highest duty of the State Department, to represent the interests of the American people.

This mission includes overseeing more than 13,000 Foreign Service Officers, who act as our representatives to the world; 12,000 Consular Officers; and an administrator of just an incredible immigration system — system that we’re going to be changing and fixing and making better; a system that’s under siege right now.  But a system that will in fact, hopefully, be the talk of the world by the time we finish.

We have 3,500 security personnel, and thousands more diplomats, embassy staff, civil servants, and administrative personnel, all of whom collectively play a vital role in advancing the safety, liberty, prosperity, and all good things of the United States.  Very important people.  Great people.

As President Eisenhower said in 1953, “Make no mistake, the reason we have representatives around the world is to protect American interests.”  For nearly 230 years, the men and women of the United States State Department have skillfully and proudly answered this call.

And now, at this moment in time, I can think of no better person to lead these dedicated public servants than our new Secretary of State, Mike Pompeo.

Secretary Pompeo, congratulations again.  I have no doubt that you will make America proud as our nation’s chief diplomat.  You’re an exceptional guy, a great friend, and somebody that truly loves our country.  We are really, really proud of you.  I speak on behalf of everybody in this room, and also on behalf of your family.

Thank you very much, Mike.  And congratulations.  (Applause.)

And now I’d now like to ask Vice President Pence to administer the oath of office.  Thank you.

(The oath is administered.)  (Applause.)

It is a great honor to have so many distinguished guests here, including many of my fellow Cabinet Secretaries and former colleagues in Congress.  Thank you for coming today.  I was also glad to see USAID Administrator Mark Green.  I look forward to working with you.

I want to first thank God for this opportunity, and for the many blessings He has granted to me in my life.  My wife Susan and my son Nick are two of the greatest of these.  They are my number one fans most days.  (Laughter.)  And they have shown unyielding support to me throughout my confirmation process, and in every other stage in my public service career.  I love you both very, very much.  (Applause.)

I want to thank John Sullivan — Deputy Secretary Sullivan.  Where’s John?  There.  John, thank you.  Thank you for your service in this interim period.  (Applause.)

Mr. President, I also want to say thank you to you.  You have entrusted me with a weighty and awesome responsibility to serve the American people, first as the Director of the CIA, and now as the Secretary of State.  This responsibility becomes more sobering when we consider the many threats to American security and prosperity, and our liberty.

Mr. President, I promise you, my team and I will be unrelenting in confronting those threats.  We will employ tough diplomacy when necessary to put the interests of the American people first.  I will work to ensure their safety, to preserve their rights, and defend their values.  And I will make sure America is always a respected and principled leader on the world stage.  (Applause.)

We are but 15 months into this administration, and we’ve already made outstanding progress by speaking the truth about the challenges we face; by confronting them head on; by partnering with strong, sovereign, independent nations to make America and the world more prosperous and secure.  We’ve put a hurt on the ISIS caliphate in Iraq and Syria.  We’ve done so by great diplomatic work.

We’re confronting all types of Iranian hostility, and are deciding on the next steps for the flawed JCPOA.  We’ve imposed real consequences on Russia for its acts of aggression.  And we will soon move our embassy in Israel to Jerusalem, years ahead of schedule.  (Applause.)

We are bringing fairness and reciprocity to our economic relationship with China, and protecting our intellectual property from them as well.  (Applause.)

And we saw, in your meetings last week with President Macron and Chancellor Merkel, we continue to uphold strength in our time-honored alliances.

But there’s one more thing.  Right now, we have an unprecedented opportunity to change the course of history on the Korean Peninsula.  I underscore the word “opportunity.”  We’re in the beginning stages of the work, and the outcome is certainly yet unknown.  But one thing is certain:  This administration will not repeat the mistakes of the past.  Our eyes are wide open.  It’s time to solve this once and for all.  A bad deal is not an option.  The American people are counting on us to get this right.

We are committed to the permanent, verifiable, irreversible dismantling of North Korea’s weapons of mass destruction program, and to do so without delay.

To my colleagues here, when I say we’re going to do this, I mean “we.”  This is a team effort at the State Department and the whole of the United States government.

Mr. President, you read one of — a great quote from the greatest President ever from Kansas.  (Laughter.)  It was a historic quote, but frankly, things haven’t changed much since then.  I’ve been an Army officer, a congressman, the Director of the CIA, now here at State.  We have much to do.  But in every position I’ve had, I’ve witnessed the skills, expertise, and patriotism of our foreign affairs professionals, whether civil servants or Foreign Service Officers, political appointees or locally employed staff, you all lay it on the line to make sure that America is safe and prosperous and free.  Thank you for that.  (Applause.)

As I’ve said, and I’ll elaborate more, I want the State Department to get its swagger back.  (Laughter.)  We need our men and women out at the frontlines, executing American diplomacy with great vigor and energy, and to represent the finest nation in the history of civilization.  We should be proud of that, and I’m counting on you all to help communicate in every corner of the world.

Mr. President, I have full confidence that my team here in Washington and around the world under your leadership can and will execute that mission for the benefit of the American people.  And I’m eager to work with you all to get that job done.

You all know this is essential work.  That’s why you’re here.  It’s why I’m here.  I look forward to doing this together. Thank you all so much for the warm welcome I have received in these first days.  I can’t wait to get after this with you.  Thank you again, Mr. President, for your trust and your leadership and your faith in me.  Thank you.  (Applause.)

Watch video of the swearing in here.