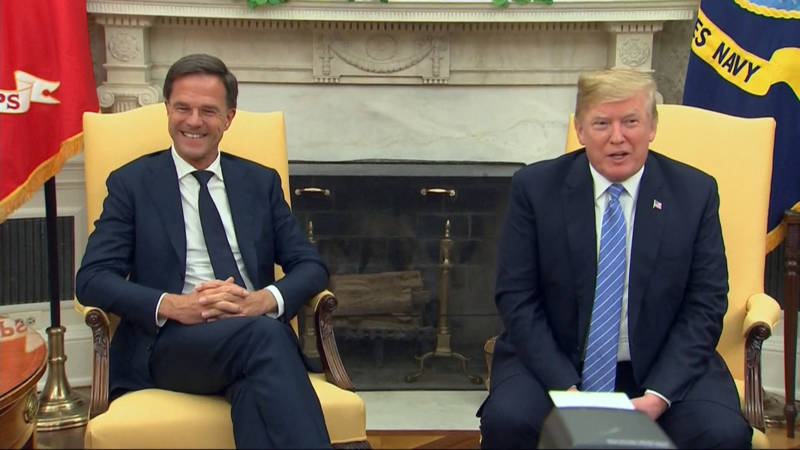 PRESIDENT TRUMP: Well, thank you very much. It’s a great honor to have the Prime Minister of the Kingdom of the Netherlands. That’s the official title.

PRESIDENT TRUMP: Sounds very elegant and beautiful. But it’s a great honor to have you. We’ve worked together and have a very, very close relationship. I think the relationship with the Netherlands has never been better than it is now.

We’ll be meeting over the next two weeks, again, at NATO.

PRESIDENT TRUMP: And we’ll be discussing that today also. And we are discussing trade and the EU and lots of other things.

Tremendous numbers are coming out of the United States and our government. Our economy is very good. It’s probably the best it’s ever been. And we are very close to making some very good trade deals — fair trade deals. I didn’t want to say “good”; I wanted to say “fair” — fair trade deals for our taxpayers and for our workers and our farmers. And a lot of good things are happening.

PRESIDENT TRUMP: — because we’re just thinking about those cars that pour in here.

PRESIDENT TRUMP: And we’ll do something. Right?

PRIME MINISTER RUTTE: We have to work something out.

PRESIDENT TRUMP: But it’ll be — it’ll be positive.

PRESIDENT TRUMP: But again, Mr. Prime Minister, thank you very much for being here. Appreciate it. Thank you.

PRIME MINISTER RUTTE: It’s good to be here. And can I add to this — that the relationship between the Netherlands and the United States is over 400 years old. We are allies. We have always been friends, always been friendly, working closely together.

And our talks today will no doubt concentrate on jobs and on security, because the President and I, we are both convinced that, as leaders, our prime task is essentially to make sure that our countries are safe and stable and that we have an economy which is providing the jobs and the future growth for our people.
And there are so many opportunities between the United States and the Netherlands to do more, both in the area of security as well as in the area of having more jobs and having more trades and more investments.

So I’m really looking forward to our discussions.