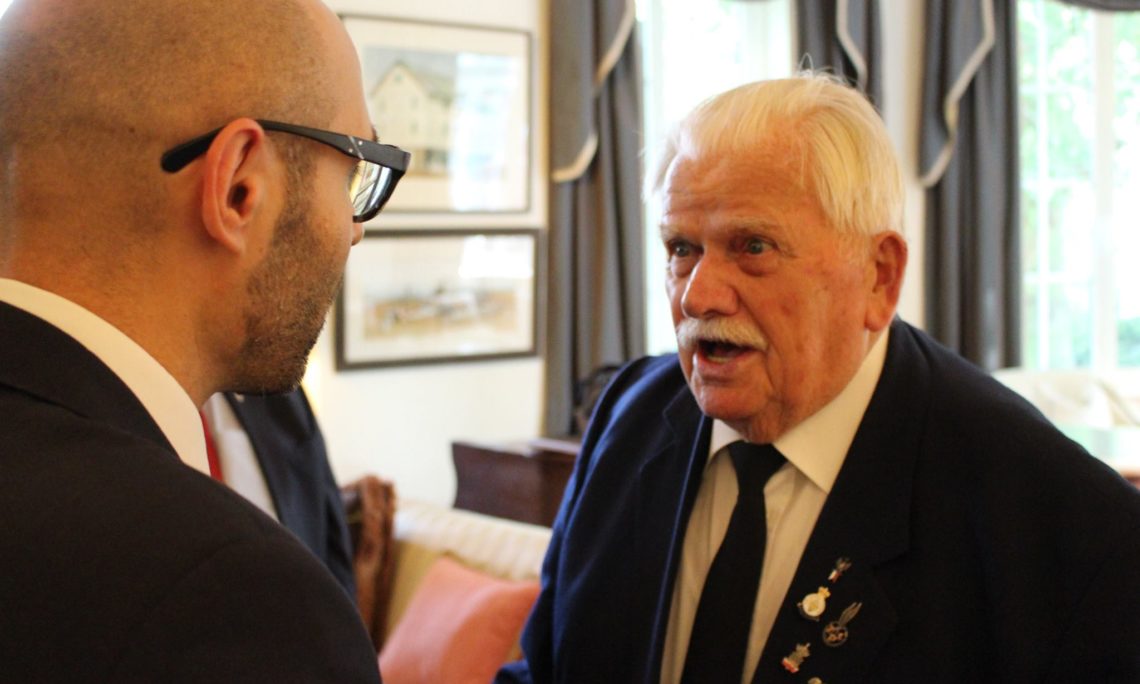 They are three generations of one family. They enlisted in the militaries of three different nations. But their cause is the same: service.

Henry Kubinski is a World War II veteran, having served as part of the First Independent Polish Parachute Brigade. He is back in the Netherlands for this week’s commemorations of Operation Market Garden, a massive airborne Allied attempt to liberate the Netherlands from the Germans in 1944. With him are his son, Alex, a veteran of the British military – also as a parachutist – and his grandson, Adam, who currently serves in the Michigan National Guard.

The family took part in a U.S. Embassy-sponsored panel discussion, joined by Charge d’Affaires Shawn Crowley, British Ambassador Peter Wilson, and Polish Ambassador Marcin Czepelak. Their stories were fascinating, and illustrated just how much the world can change in one family’s lifetime.

Henry Kubinski was 14 when Germany invaded Poland on September 1, 1939. He was sent to his grandmother’s farm for a year, to keep him out of trouble and away from German attention. His sisters were sent to Germany as forced labor. Upon returning home in 1940, Kubinski too was sent to a German farm and forced to work for three years. In November of 1943, he was made to join the German Army. He didn’t have to join, of course, but if he didn’t, his father told him, his whole family would be wiped out as retribution. His father urged him to look for any opportunity to get out, to desert and flee to the Allied side. He was sent to France after basic training. He was there until D-Day, when he was able to surrender to British troops. He was taken to England as a German Prisoner of War. Soon, though, anyone who could speak Polish and pass a vetting was released and permitted to sign up. Kubinski was given a new name, a false history, and joined the Polish Parachute Brigade. Though he did not take part in Operation Market Garden and the Polish liberation of Driel, he did serve in the Netherlands.

Kubinski, now 92 and quick to laugh, recounted his story sitting in between his son and grandson.

After the war, the Iron Curtain descended across Europe. Kubinski was unable to return home. So, he settled in the United Kingdom. He joined the British military, and served for more than 33 years. His son, Alex, was born in a British Military Hospital in Hanover, Germany, where Henry was serving at the time. He became a British paratrooper in 1982. He later joined the civil service. In 1993, he moved to the British government’s Department for Transport Office in Michigan. He has lived there ever since.

And that’s where his son, Adam – now U.S. Army Specialist Adam Kubinski – was born. He joined the National Guard when he was 17, serving with the 125th Infantry’s A Company based in Detroit.

When asked about their cultural identities, time-caused differences became apparent. Henry considers himself Polish, though he has not lived there since 1941. Alex, who lives in America and speaks with a British accent and has never lived in Poland, said he wrestled with that question, but “deep down I know I’m Polish.” But Adam, who has known nothing but America as a home, had no such difficulties. “I was born in the United States, so I’m less confused,” he said.

As CDA Crowley said, “This family is an inspiration to us all and the embodiment of the values that are the foundation of the Trans-Atlantic community. Three soldiers, from three nations, but serving one common cause. Their family history is proof that together we are safer and more secure.”