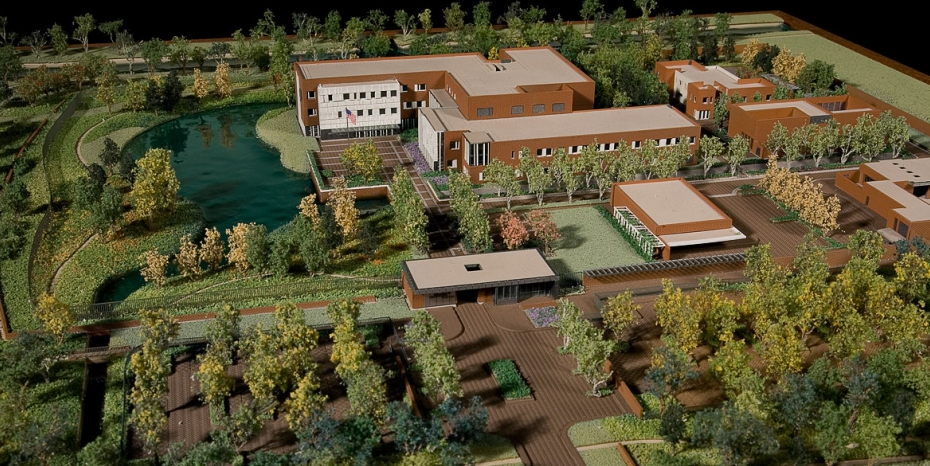 The U.S. Embassy to the Kingdom of the Netherlands is pleased to announce that today it was officially opened in a ribbon-cutting ceremony at John Adams Park 1 in Wassenaar.

Today’s ceremony was hosted by Ambassador Peter Hoekstra. Department of State officials and a five-member bi-partisan delegation from the Congressional Caucus on the Netherlands traveled from the United States to take part in the ceremony. Minister of Social Affairs and Employment Wouter Koolmees represented the Dutch government and Mayor Frank Koen of the city of Wassenaar helped to dedicate the building. The national anthems were performed by the Marine Band of the Royal Netherlands Navy (Marinierskapel der Koninklijke Marine).
The reception featured wines donated by E&J Gallo and the Wine Institute of California and craft beer donated by All Kinds of Beer and North Carolina Craft Beer.

The ribbon was cut by:

Embassy staff began working in the new building on January 29, 2018. The design provides a secure, modern, and environmentally sustainable platform for diplomacy in the Netherlands. It is a fitting home for the U.S., Dutch, and foreign staff working to maintain and improve the longest peaceful, unbroken relationship the United States has with any country in the world.

See the attached Fact Sheet for more details about the building. For more information, please contact: Sherry Keneson-Hall, Counselor for Public Affairs by telephone at 070 310 2440 or by email at Keneson-HallSC@state.gov