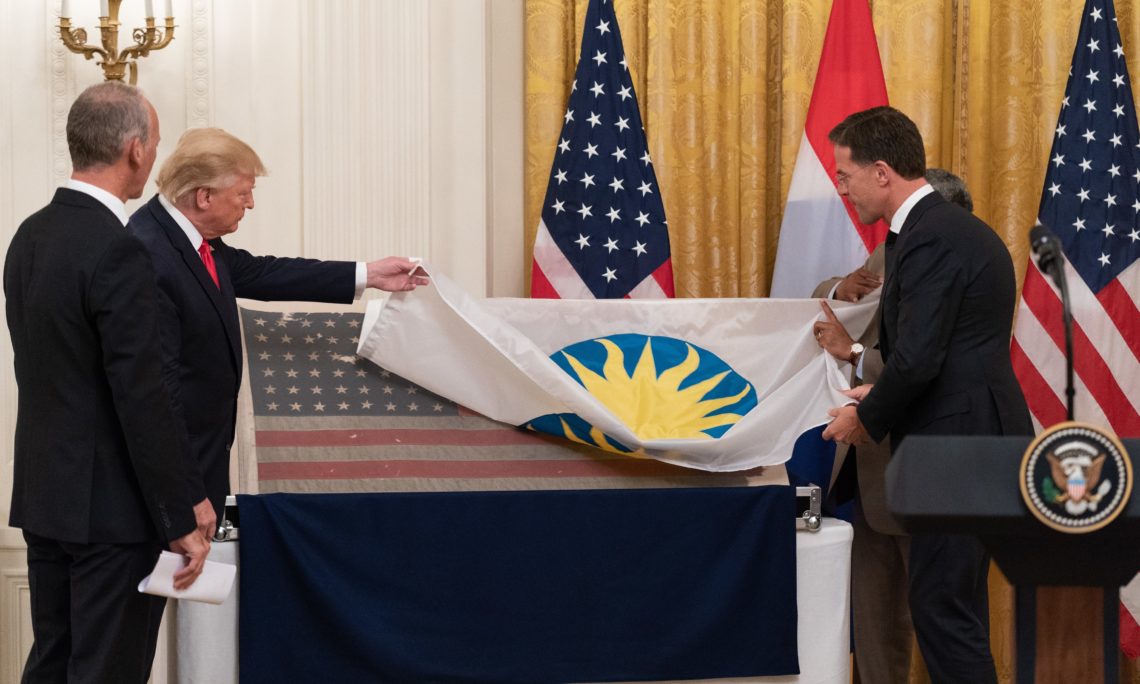 Remarks by President Trump at a Flag Presentation Ceremony

THE PRESIDENT:  Thank you very much.  Thank you.  Before I begin, I want to apprise everyone of an incident in the Strait of Hormuz today involving USS Boxer, a Navy amphibious assault ship.  The Boxer took defensive action against an Iranian drone, which had closed into a very, very near distance, approximately 1,000 yards, ignoring multiple calls to stand down and was threatening the safety of the ship and the ship’s crew.  The drone was immediately destroyed.

This is the latest of many provocative and hostile actions by Iran against vessels operating in international waters.  The United States reserves the right to defend our personnel, our facilities, and interests, and calls upon all nations to condemn Iran’s attempts to disrupt freedom of navigation and global commerce.

I also call on other nations to protect their ships as they go through the Strait, and to work with us in the future.  Thank you very much.

I thought you should you know that.

Thank you also to Vice President Pence and Acting Secretary of Defense Richard Spencer for joining us.  Thank you, Richard, Mike.

Last month, Melania and I traveled to the United Kingdom and France to commemorate the 75th Anniversary of D-Day.  Together, we paid tribute to every courageous patriot who fought to liberate Europe from the evil of Nazi rule.

Today, on behalf of the American people, I will receive an American flag that flew aboard a ship carrying the first waves of United States service members to land in Normandy.  Seventy-five years after that momentous day — and that is truly a momentous day; one of the most powerful, most important days in the history of our world — it is my honor to welcome this great American flag back home where it belongs.

I want to thank the Prime Minister, as well as U.S. Ambassador Peter Hoekstra.  Pete, thank you.  Thank you very much, Peter.  You’re doing a great job.  And Dutch Ambassador Hendrik Schuwer, for being here today and for their devoted efforts to deepen the abiding ties between the United States and the Netherlands.  Our relationship has never been closer than it is today.

We are also profoundly moved to be joined by several incredible World War Two veterans who helped defeat the Nazis and save freedom for all humanity.

This event would not be possible without the extraordinary generosity of the flag’s two donors from the Netherlands: Mr. Bert Kreuk, and his uncle and business partner, Mr. Theo Schols.  And I want to thank you very much.  Where are they?  Thank you very much.  That’s great.  (Applause.)  Very much, thank you.
And thank you for preserving our history and for watching over the immortal legacy of our D-Day heroes.  That’s what you did.  Thank you.  And I know it was expensive.  Two rich people, I assume, right?  (Laughter.)  Huh?  I appreciate it.  Thank you.

On June 6, 1944, the flag we receive today flew aboard Landing Craft Control 60.  And it was approached, and when it approached Utah Beach — I was there very recently with the First Lady, and it was something incredible to see.

Commanding the ship was a young Navy lieutenant, two days shy of his 27th birthday, named Howard Vander Beek.  Amid treacherous German minefields, raging winds, and rough seas, Lieutenant Vander Beek and his crew led an astonishing 19 waves of American troops and equipment to those very, very dangerous beaches.  Through it all, this flag soared proudly above the waters of the English Channel, announcing the arrival of our American warriors.

After completing his mission on D-Day, Lieutenant Vander Beek took the flag — now bearing the scars of German machinegun fire and stained, all over it, with dirt and diesel and blood.  He carried it with him in his backpack for the remainder of the war and kept the flag until his death in 2014.

Soon after, the flag was purchased at auction by Mr. Kreuk and Mr. Schols, whose relatives were among the hundreds of Dutch who perished in the German bombings of Rotterdam in 1940.

These two gentlemen paid half a million dollars to obtain the flag, just so they could return it as a gift to the American people and to the United States of America.

As they explained, they wanted to thank the United States for the extraordinary sacrifice our service members made to liberate their nation and all of Europe in World War Two.  So nice.  Thank you very much.  So nice.

Following today’s ceremony, the extraordinary flag will be displayed at the Smithsonian’s Museum of American History — and very proudly.

And I know they will take great care of this priceless American artifact.  Thank you very much for being here, both.  I know they share Mr. Kreuk’s vision for the flag.  As he said, it will tell visitors from around the world about the story of freedom.

With their help, this wonderful flag will be preserved forever and ever in American history, as it should be.  It will always be a reminder of the supreme sacrifice of our warriors, and the beautiful friendship between the Dutch and the American people.

And now, I would like to introduce a very special man, a man I’ve gotten to know very well during our strong negotiations on trade and our negotiations on the military and NATO and all of the other things we’ve been talking about for so long, it seems like right now.  A Prime Minister who is very, very popular in his country.  A great gentleman.  And you’re going to say a few words, and then Mr. Kreuk and Secretary Bunch will tell us more about the treasured gift that they presented us with.

So I want to thank you all, and God bless America.