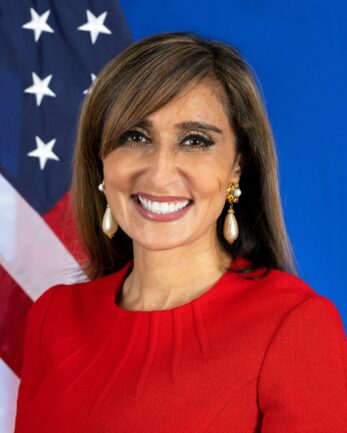 Shefali Razdan Duggal was sworn in as U.S. Ambassador to the Netherlands September 20 and presented her credentials to King Willem-Alexander on October 19.  She is a San Francisco Committee member of Human Rights Watch, serves on the Leadership and Character Council at Wake Forest University, and is on the National Advisory Board of Inside Washington at Miami University of Ohio.  Most recently, Razdan Duggal served on the National Finance Committee of Joe Biden for President 2020 and was a National Co-Chair of Women for Biden.  She has also served as a Deputy National Finance Chair at the Democratic National Committee.

Previously, Razdan Duggal served on the National Board of Directors for Emily’s List 2014-2020.  She was a Presidential Appointee to the United States Holocaust Memorial Council 2014-2018 and continues to serve as a Western Region Advisor to the United States Holocaust Memorial Museum.  She has held a variety of positions in several national-level political campaigns.

A Kashmiri born in Haridwar U.P. India, Razdan Duggal moved to the United States at a very young age and grew up in Cincinnati, Ohio. She has a B.S. in Mass Communication, with a minor in Political Science, from Miami University in Oxford, Ohio, and an M.A. in Media Ecology from New York University. Razdan Duggal believes in authenticity, kindness, and service. She is married with two children.