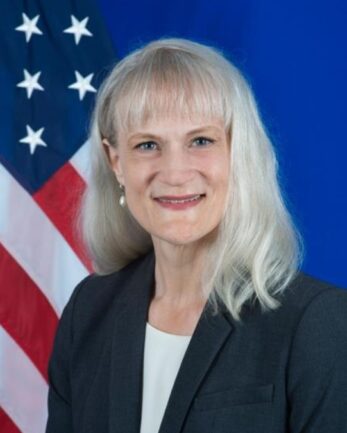 Aleisha Woodward, a career member of the U.S. Senior Foreign Service, began her assignment in the Netherlands as Deputy Chief of Mission in June 2022.

Since joining the Department of State in 1998, Aleisha has focused on engaging diverse audiences across Europe and Asia and empowering people-to-people connections to promote democratic values, economic development, and other national security priorities.  Aleisha’s most recent assignment was as Deputy Assistant Secretary in the Bureau of Educational and Cultural Affairs (ECA) in Washington D.C., overseeing strategic planning and policy coordination of ECA’s more than 100 educational and professional exchange programs.  In that role she also created the Academy for Women Entrepreneurs, now being implemented by U.S. embassies in more than 90 countries, and led the U.S. government’s efforts to preserve cultural heritage around the world.

As Consul General in Perth, Aleisha directed U.S. engagement in the state of Western Australia, working closely with U.S. businesses to advance trade and investment ties.  Aleisha led public diplomacy efforts on issues ranging from political-military security to human rights at U.S. embassies in Japan, Moldova, Kazakhstan, Ireland, and the Republic of Korea.  Aleisha also served as a Senior Watch Officer in the State Department’s 24-hour Operations Center and in the Office of Australia, New Zealand, and Pacific Island Affairs.

Aleisha received undergraduate and graduate degrees in international relations from Brigham Young University with concentrations on European political systems and Northeast Asia, respectively.  In 2010, she was awarded a graduate degree in national security strategy by the National War College.  Aleisha has studied several languages, including Dutch, Japanese, and Russian.

Aleisha grew up on a potato farm in the southeast of Washington state.  She enjoys traveling, scuba diving, cheering for her favorite Australian Rules Football team, singing in her church choir, and keeping up with her large, extended family.