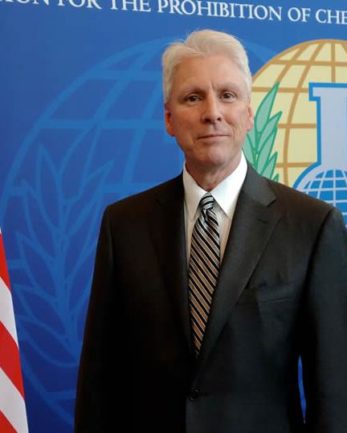 Kenneth Ward has over twenty-five years of experience with the U.S. Government in the areas of arms control and nonproliferation of weapons of mass destruction. From 2010- 2015, he was the Director of the Office of Chemical and Biological Weapons Affairs in the Bureau of Arms Control, Verification and Compliance, also serving as the Executive Director of the U.S. National Authority for the Chemical Weapons Convention. From 2009-2010, he was the Chief of Staff for the AVC Bureau. In 2008, he served as a senior member of the professional staff of the congressionally-mandated Commission on the Prevention of Weapons of Mass Destruction Proliferation and Terrorism. From 1995-2001, Ambassador Ward was the Deputy Head of the U.S. Delegation to the multilateral negotiations for a protocol to the Biological Weapons Convention, as well as the 2006 BWC Review Conference. From 2004 to 2007, he served as the deputy head of the Libya WMD elimination operation. In 2010, he was appointed adjunct professor for biological weapons at the Elliott School of International Affairs at The George Washington University. Ambassador Ward received his law degree from Georgetown University Law Center and is a member of the District of Columbia Bar. He also received a master’s degree in international relations from Oxford University and a bachelor’s degree in international politics from the Georgetown University School of Foreign Service.