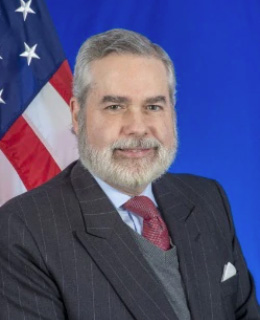 Joseph Manso presented his credentials to Director-General Fernando Arias on September 23, 2020.  He is a career member of the Senior Foreign Service.  Mr. Manso’s most recent prior positions were as the Deputy Assistant Secretary of State for International Organization Affairs (IO), Director of IO’s Office of United Nations Political Affairs and Director of the Office of European Security & Political-Military Affairs in the Bureau of European and Eurasian Affairs.

Mr. Manso has extensive experience in multilateral affairs, as well as military and law enforcement matters. He has served on the faculty of the National War College, as the U.S. Deputy Permanent Representative to NATO, and as the Director of the Americas Program in the Bureau of International Narcotics and Law Enforcement Affairs (INL). Mr. Manso has also completed assignments at the U.S. Mission to the Organization for Security and Cooperation in Europe (OSCE), and the U.S. Mission to the UN in New York, where he was an advisor and a member of the U.S. delegation to the Security Council. Mr. Manso has also served in Iraq, Bolivia, Mexico, and Spain.

Prior to entering the Foreign Service in 1985, Mr. Manso worked in law and banking in New York and Madrid. He holds a B.A. in History from Fordham College and a Juris Doctor from Fordham Law School. Mr. Manso also completed doctoral study in international law at the University of Madrid.