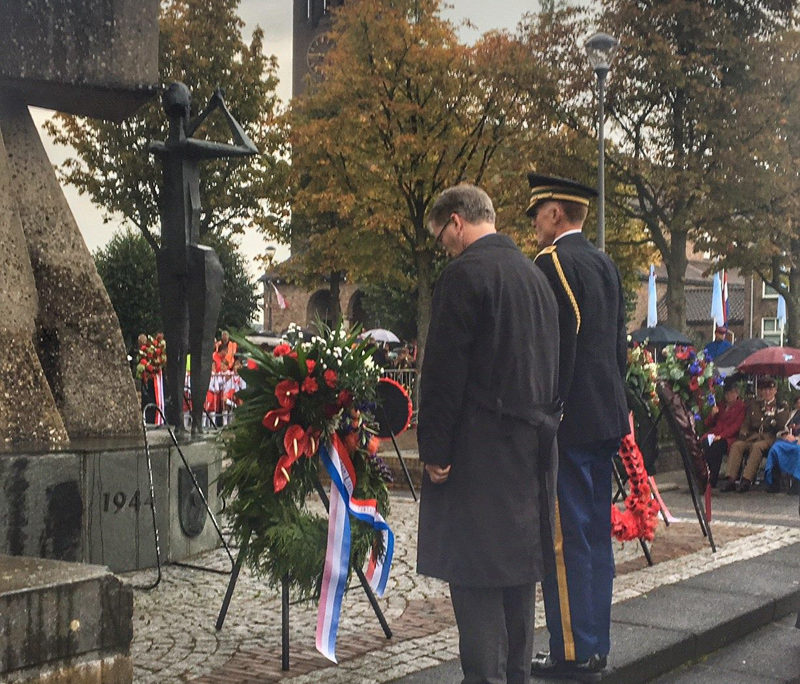 Last weekend the 73rd Anniversary of Operation Market Garden was commemorated in dozens of towns and hamlets in and around Arnhem, Nijmegen, and Eindhoven. Chargé d’Affaires Shawn Crowley, Defense Attaché Captain Robert Buzzell, and U.S. Army Attaché Vince Martinelli laid wreaths and flowers at monuments large and small over four days that showed just how many in the Netherlands still remember the dreadful events of World War II, even those too young to have been there. American veterans, most in their nineties, were feted and treated as honored guests. In Ginkelse Heide, after many weather delays, re-enactors finally managed to jump into one of the many Drop Zones from Operation Market Garden, using the old-time American parachutes used during World War II.

Operation Market Garden was the largest Airborne operation in history. It was an Allied operation featuring U.S., British, and Polish troops designed to take strategic positions from the Nazis in September of 1944 so that the invasion of Germany could begin. Though some Dutch towns and villages were liberated and stayed liberated, the operation was deemed a failure and numerous objectives were retaken and remained in German hands for months.

Nonetheless, the Dutch hold numerous remembrance ceremonies in towns and villages in and around Arnhem, Nijmegen, and Eindhoven. Veterans, most now in their nineties, are invited and honored. Wreaths are laid. The names of the dead read. Prayers are said. Children read poems. There are parachute jumps. Some of the ceremonies are attended by thousands, others by dozens. But the theme running through all of them is to remember and to give thanks for liberation.

Of the 34,600 Allied men deployed for the operation, 20,011 came in by parachute, and the rest landed by gliders. Reenactors parachute onto Ginkelse Heide in Ede, a Drop Zone for the 82nd Airborne Division on September 17, 1944. This year, the weather was wet and windy and the cloud cover was too low for the jump from 700 meters before the ceremony. Still, thousands of Dutch waited by the purple-toned heath for the official ceremony to begin.

Minutes after the speeches had been completed and the fife and drums and Falcon Guards had marched from the field, there was a break in the weather. Suddenly the skies filled with paratroopers in old-time parachutes. They weren’t in the skies long, for 700 meters is not a great height, but it was still a sight to see, a sight that must have been all the more awe-inspiring in 1944.

From Ede, it was on to Driel, the drop zone for the Polish 1st Independent Parachute Brigade. A ceremony took place in the town square – “Polish Square” – in which a monument was placed in 1960. There is also a monument to the brigade’s commander, Major General Sabowski.

The small crowd rose in applause when five Polish veterans arrived. Amongst them was Henri Kubinski. After the war, with the descent of the Iron Curtain, Kubinski was unable to return to Poland. Instead, he went to Great Britain, eventually joining the British armed forces. His son Alex followed in his footsteps, becoming a British citizen. Eventually, Alex moved to Michigan. His son Adam was born there. He joined the Michigan National Guard and, wearing his uniform, wheeled his grandfather into the remembrance ceremony in Driel.

The following day, Sunday, September 17, Army Attaché Vince Martinelli laid wreaths along what became known as The Corridor. He visited the General Gavin Monument in Groesbeek, the Replica Glider Monument in Klein-Amerika, the Monument to the Dutch in Sint-Oedenrode, the 101st Airborne Paratrooper Monument in Son en Breugel, the Airborne Monument in Eindhoven, and the Joe Mann Theater in Best.

The last ceremony of the day was at the windmill in Eerde in North Brabant. Seventy-three years earlier the 501st Parachute Infantry Regiment of the 101st Airborne Division landed around Eerde. Over the next week, the village changed hands six times in heavy fighting that claimed dozens of casualties. The town’s iconic windmill and church were heavily damaged. The whole village, it seemed, turned out for the remembrance, including children from the local elementary school who have adopted the restored windmill. Dozens of reenactors marched through the streets of Eerde to the monument by the windmill.

Also there was Vincent Speranza, 92, a 501st veteran. After pretending to struggle to bend down to lay flowers at the monument, he bounced up with a mischievous smile, jokingly threw his walking stick away and addressed the crowd. Later, he led some of the children in a song. Many in the crowd joined in.

The Americans held Eerde, and the townsfolk commemorate their liberation every year. Speeches from young and old promise never to take freedom for granted. Stories of horror and fighting from the German occupation are told and retold.

In remarks at the St. Stevenskerk in Nijmegen, CDA Crowley said, “It is important to note that America’s liberators did not forget about Nijmegen after the war.  I understand it was Lieutenant General Gavin who suggested that the city of Nijmegen be adopted by Albany.  The citizens of Albany answered the call.  Schools, churches, historical associations, scouts, and service clubs all contributed to the Albany Aid Campaign.  They sent 300 tons of supplies to Nijmegen aboard the SS Westerdam, including food, clothing, and building materials.  The spirit behind this donation can still be seen throughout the United States today, as people assist the victims of the recent hurricanes.

“I am proud to say that, with modest support from the U.S. Embassy, Stichting FAN and Anja Adriaans will bring the Albany-Nijmegen story to light via a short documentary called “Out of Sight,” which is scheduled to premier later this year.

“The Westerdam was not the only ship carrying U.S. assistance to Europe in 1947.  This year we also celebrate the 70th anniversary of the Marshall Plan.  U.S. taxpayers provided almost 13 billion dollars in aid to Europe from 1947 to 1952, including 1 billion dollars to the Netherlands.  In the end, this country received more assistance per person than any other EU nation, aid worth more than $1,700 per capita today.

“The Marshall Plan restored confidence and set the stage for an unprecedented era of prosperity, peace, and cooperation in Europe.  This weekend, as we honor those who fought and died for the liberation of the Netherlands, it is also important to also remember the legacy that has been built after the war.  Today, as we face new threats and uncertainties, we must do our part to ensure this cooperation and friendship continues.

“In America we have a saying that I believe you also have in Dutch: “Wij zijn vrienden door dik en dun.”  Nothing illustrates that more than the friendship between Albany and Nijmegen.  Thank you.”