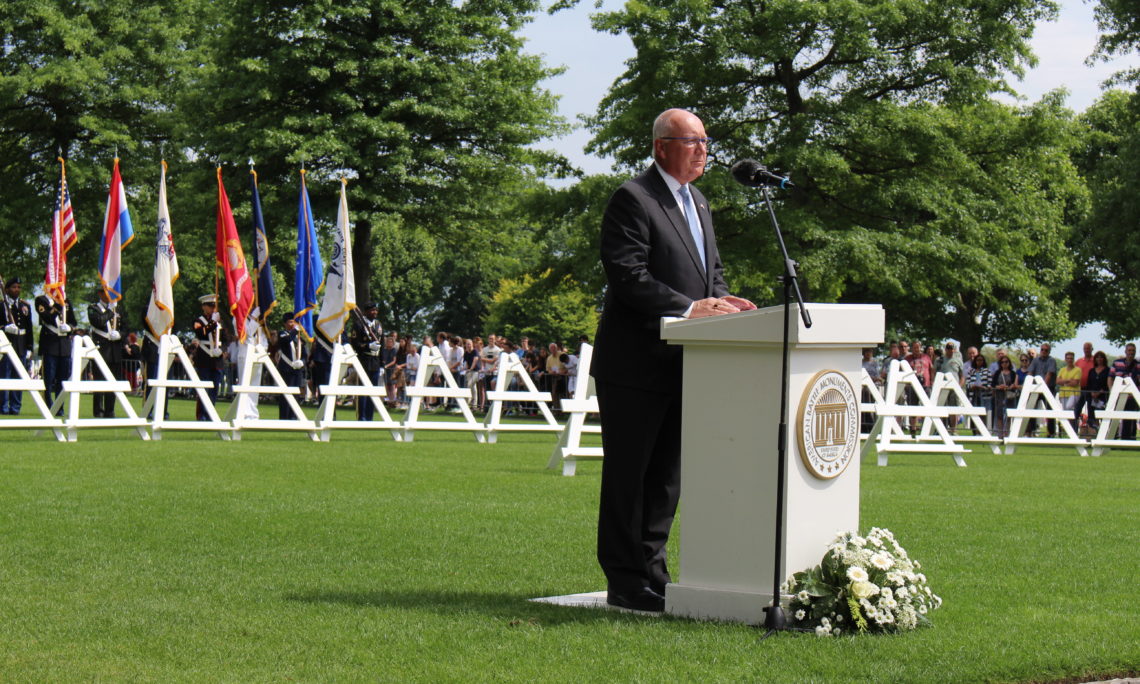 The annual Memorial Day ceremony at the Netherlands American Cemetery in Margraten is always emotional.  The ceremony is held among the names of 10,023 service men and women buried or honored in the cemetery.  Those service members died in World War II during the liberation of Europe.  Ambassador Pete Hoekstra spoke at the ceremony of the order that those soldiers sought to restore in a chaotic time.  He spoke about WWII veteran Jack Frank of North Carolina, who was present at the ceremony.  The now 94 year old was just 19 when he hit the shores at Normandy.  Some of his friends and classmates are buried in the cemetery.

State Secretary for Interior and Kingdom Relations Raymond Knops represented the Government of the Netherlands at the ceremony.  He spoke about the grave that his family has adopted, noting that it was a way to teach his own children about the sacrifices that others made for the Dutch.  He said he wanted them to learn that “freedom is not free.”

Limburg Govenor Theo Bovens hosted a lunch before the ceremony in honor of the occasion.  This year’s guest speaker was Brigadier General Kate Leahy the Deputy Commanding General, Mobilization and Reserve Affairs.  Marines from the Embassy’s Marine Security Guard Detachment served in the Joint Color Guard and service members from the Royal Netherlands Armed Forces and the United States Armed Forces stationed in the Netherlands, Belgium, and Germany participated in the event.  Four F-16s from Volkel Airbase closed the event with a flyover in the Missing Man formation.