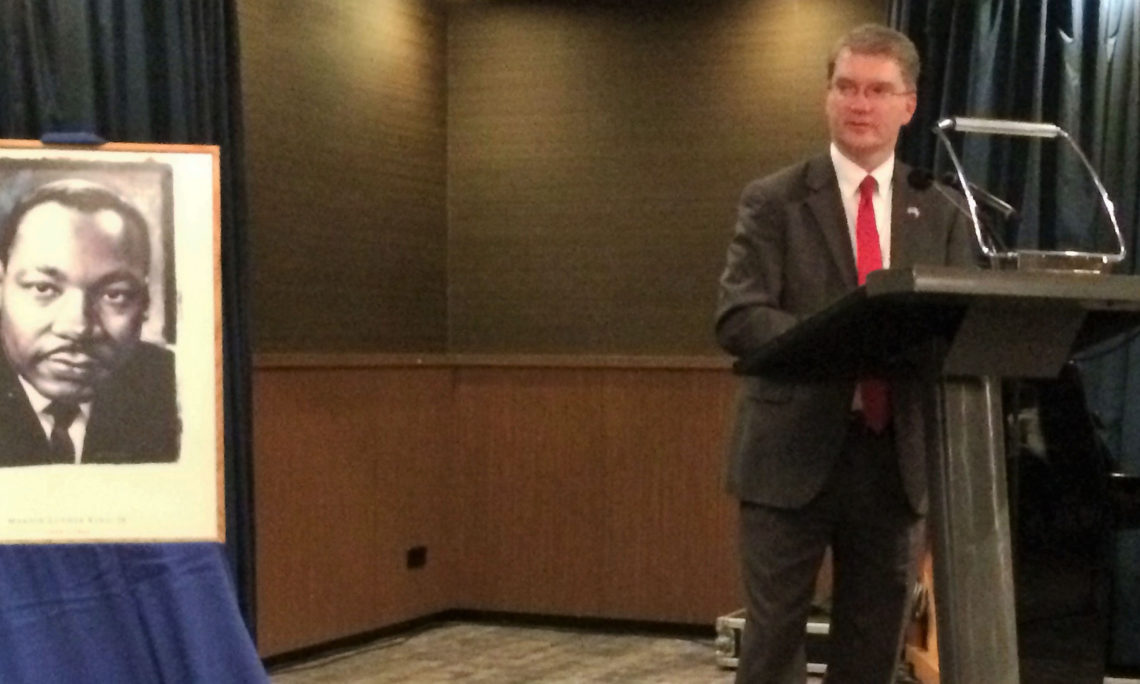 CDA Crowley at the MLK Commemoration

When Dr. King visited the Netherlands in 1964, he said, “Honesty and realism impel me to admit that we still have a long, long way to go. But I think the important thing is that we are making progress.”

At Sunday’s Martin Luther King, Jr. Tribute Dinner in the Hague, Chargé d’Affaires Shawn Crowley said that if Dr. King “were here today, I think he’d say the same thing again. We have made progress in accepting diversity – we have had our first African-American President – but we all know there is a long way to go.”

Crowley pointed out that we had recently witnessed one of the hallmarks of our American Republic: the peaceful transfer of power from one duly-elected President to another. He added that President Trump had met with Martin Luther King III on MLK Day and had had an “extraordinarily constructive conversation,” according to King, about ways to make it easier for people to vote.

Guests of honor for the evening were Lois Pot and Reverend Harcourt Klinefelter, both of whom were active during the civil rights movement in the United States during the 1950s and 1960s.

But the centrepiece of the evening was a series of eight speeches given by teenagers living in The Hague. Their remarks certainly seemed to underscore Crowley’s point.

Charlotte Ruitenberg, Alice Chen, Deniz Bayrak, Hope Chow, Isaiah King, Hannah Osman, Eva van der Vliet, and Warren de Vreeze have lived all over the world. Each one of them told tales of ignorance or discrimination, of being singled out for one reason or another, of bullying and name calling. One girl was asked, because she is white, why she would be participating in an MLK event. Each of the young speakers, though, had thought through their situation. Each of them had used their particular situation as a fulcrum on which to pivot, on which to make resolution, as a guiding point for their life.

The theme of incomplete progress was continued by Rev. Klinefelter. For almost three years he had worked with MLK, recording his speeches and distributing them to the media. He recalled Dr. King’s assessment of the progress of the civil rights movement during a staff retreat. They had brought the football to the 50-yard line, MLK said, but it was going to take some determined running and good play-calling to get the ball into the end zone. For the ball, Dr. King said, was now moving into opposition territory. A few months later, at the Lorraine Motel in Memphis, Tennessee, Dr. King was assassinated.

Overseas Americans Remember has held an MLK Jr. Tribute Dinner almost every year in The Hague since President Ronald Reagan signed the holiday into law in 1983. Dr. King came to the Netherlands for just one day in 1964 to take part in the Congress of European Baptists.