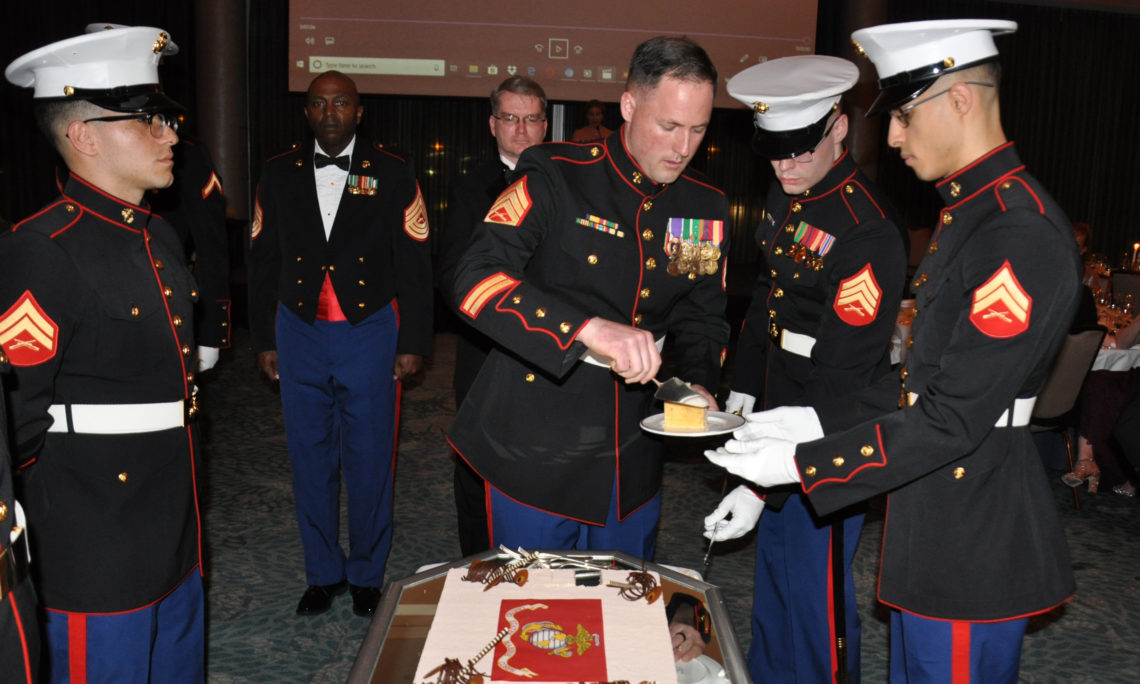 November 17, 2018 – The U.S. Marine Security Guards marked the occasion of the 243rd anniversary of the forming of the United States Marine Corps at the Okura Hotel Amsterdam. Chargé d’Affaires Shawn Crowley was Guest of Honor and the guest speaker was General Jeff Mac Mootry, the Commandant of the Netherlands Marines.

Below are the remarks of Mr. Crowley:

“Good evening ladies and gentlemen.  Thank you all for coming to one of the most meaningful events that we host each year.

I am especially pleased that General Jeff Mac Mootry, the Commandant of the Netherlands Marines, could be with us tonight as our guest speaker.  I would like to greet him, all of our guests, and especially the Marines present on behalf of Ambassador Hoekstra and Diane, Sabine and I, and all the members of the U.S. Mission to the Netherlands.

A few days ago, Secretary of State Pompeo sent a message to every diplomatic and consular mission in the world congratulating the United States Marine Corps on its 243rd birthday.

The Secretary noted that the Marine Corps and the Department of State share a long history and have forged one of the most important and enduring relationships that exists between any two U.S. government entities.

He mentioned one of my favorite stories, about the time in 1805 when Marine Corps First Lieutenant Presley O’Bannon and U.S. Consul William Eaton recruited a mercenary army in Egypt and walked hundreds of miles through the desert to attack the pirate fort at Derna, which I had the honor of visiting while serving in Libya.

That collaboration between the State Department, U.S. Marines, and U.S. Navy was the decisive action of the First Barbary War.  It was also immortalized as the “Shores of Tripoli” in the Marine Corps hymn we will hear shortly.

I understand there are 1,800 Marine Security Guards currently serving in 148 locations around the world.  As we approach Thanksgiving later this week, we in the Embassy and Consulate General give thanks to the brave Marines who protect us each and every day.  They are the only members of the community who are here alone, far from home and without their families.  They help the broader community in countless ways, whether it be collecting Toys for Tots, helping organize events for breast cancer awareness, or putting our kids through boot camp.

I would like to thank our Marines for their service, especially Corporal Hirn and Corporal Huggins, who are standing watch tonight and unable to join the festivities.  Please join me for a round of applause for our detachment.

Marines, as Secretary Pompeo said, we admire your sense of purpose, dedication to duty, and commitment to achieving your mission.  Your vigilant protection gives us the confidence to perform our work.  We honor your readiness to make the ultimate sacrifice, if necessary, to protect our great nation.  Marines represent the very best of what America stands for.  America thanks you, not only on your birthday, but every day.