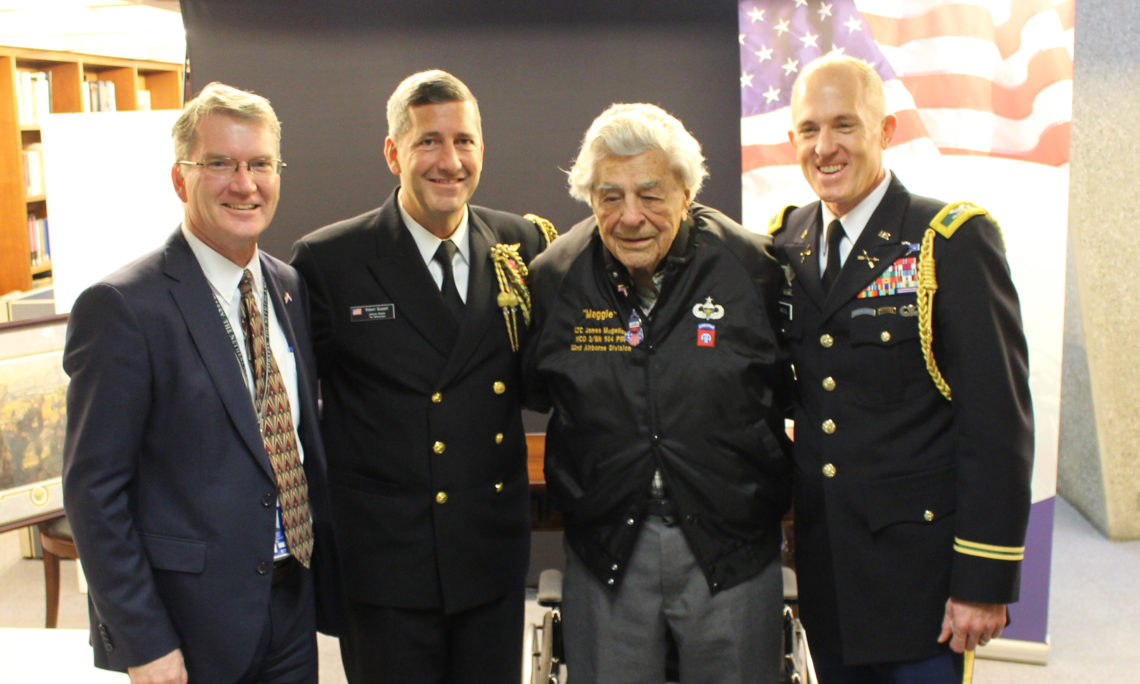 Lt. Col. James “Maggie” Megellas, the most-decorated officer in the history of the 82 nd Airborne, may be 100 years of age, but he sure doesn’t look it. And when he tells his stories, particularly the one about the harrowing events around the “Waal Crossing” of September 20, 1944, he’s a young man of 27 again.

Maggie led H. Company 504 PIR. He puts you right there. “Think about it … put yourself in the boots of a 19-year- old,” he urges, reminding you that these events – all consigned to the history books now – happened to real people, to young, American men, many of whom did not make it home.

He described the Waal Crossing, which was part of Operation Market Garden – immortalized by the movie “A Bridge Too Far” – as a suicide mission. The Americans, he said, had 26 flimsy canvas boats propelled by paddles. The Germans, on the other side of the Waal, had had years to dig in and train their machine guns on the river.

Before the crossing, Maggie said, the young Americans, some of whom had premonitions that they weren’t going to make it, said their farewells. Some gave away their valuable possessions to those who did not have to make the crossing.

The machine guns opened up on them as soon as Maggie and his boys hit the water. Then the grenades came, and there were snipers on the bridges. It was broad daylight. Of the 26 boats, only 11 made it. And when they did make it to the other side, the Americans were pinned down “without so much as a blade of grass for cover’’ for 800 yards. The 11 boats returned to the other shore, Maggie’s men had no place to go except forward where the Germans and their machine guns awaited.

He made it and his company took the fort in which the Germans had hunkered down, but the hellish events of that day have stayed with him.

On Wednesday, Maggie made the crossing over the Waal River again. Every evening at dusk in Nijmegen – yes, every evening – a group of Dutch veterans and locals walk across the bridge to remember the events of 1944. This time, amidst much fanfare, they pushed Maggie in his wheelchair.

It was a homecoming, of sorts, for Maggie. A time to remember his men. A time to reflect on the freedom the Dutch so deeply appreciate. When he came back to Nijmegen for the 60th anniversary, he said, there were many of his fellow veterans. The time, he was the only one.