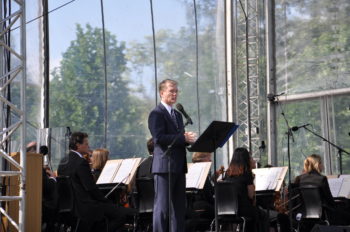 Since 2006, the Netherlands American Cemetery in Margraten has held an open-air Liberation Concert as a tribute to and in remembrance of the liberation of the Netherlands that began in September 1944 and those who died to secure it. CDA Shawn P. Crowley gave the opening remarks below at the concert on September 4, 2016.