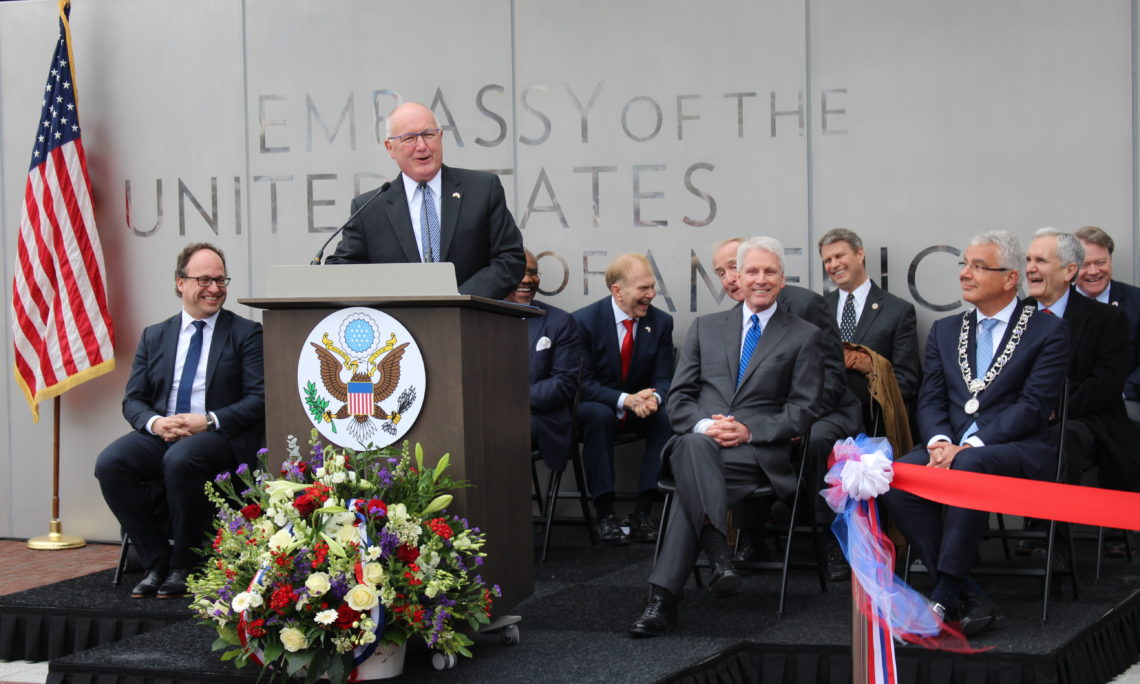 The U.S. Embassy to the Kingdom of the Netherlands is pleased to announce that today it was officially opened in a ribbon-cutting ceremony at John Adams Park 1 in Wassenaar.  The ceremony was hosted by Ambassador Peter Hoekstra and included officials from the Department of State, a five-member bi-partisan delegation from the U.S. Congress, the Minister of Social Affairs and Employment Wouter Koolmees, the Mayors of The Hague and Wassenaar, and others.

The national anthems were performed by the Marine Band of the Royal Netherlands Navy (Marinierskapel der Koninklijke Marine). The reception featured wines donated by E&J Gallo and the Wine Institute of California and craft beer donated by All Kinds of Beer and North Carolina Craft Beer.

During the ceremony, speeches focused on the new embassy as a commitment to the future of U.S.-Dutch relations, as well as the historic, strong ties between the two countries.

Embassy staff began working in the new building on January 29, 2018.  The design provides a secure, modern, and environmentally sustainable platform for diplomacy in the Netherlands.  It is a fitting home for the U.S., Dutch, and foreign staff working to maintain and improve the longest peaceful, unbroken relationship the United States has with any country in the world.

During the ceremony, the ribbon was cut by:

More photos of the opening can be found in the photo album of the U.S. Embassy.

The municipality of Wassenaar: Home away from home

Your excellencies, ladies and gentlemen,

The municipality of Wassenaar is honored, and also very proud, that the United States chose to locate their new embassy at Wassenaar.

Ten years ago the municipality of the Hague and the U.S. embassy were looking for a suitable location to build a new embassy. In the Dutch tradition of ‘polderen’ and civic participation it took a lot of dialogue to get the building from drawing board to its full size completion.

But here we are, in this great architectural building which is also one of the most environmentally sustainable US-embassies worldwide.

Wassenaar offers a ‘home’ to many employees of international companies and their families from all over the world. Among them 35 ambassadors and co-workers of international organisations who have established themselves in The Hague and the surrounding region. In this way Wassenaar effectively contributes to the investment climate in the Hague/Rotterdam metropolitan region.

As you know Wassenaar is a unique family village with 26.000 inhabitants, its beautiful country estates, the woodlands, its dunes, the sandy beaches, the North sea, the American school, an excellent public library, a good variety of shops, outstanding sports and cultural facilities. Many expats have found the joy of seeing their kids turning out into excellent cyclist in a save and healthy environment.

And that is the greatest gift Wassenaar can offer you: a home away from home.

Congratulations and welcome to Wassenaar!

General Information
The new Embassy was constructed on a site within Wassenaar, a municipality adjoining the city of The Hague.  The new facilities provide a secure, modern, and environmentally sustainable platform for diplomacy.  Moore Ruble Yudell Architects &amp; Planners of Santa Monica, California in 2010 was the architect.  The construction contractor was Caddell Construction Company of Montgomery, Alabama.

A landscape design sensitive to the Dutch landscape, carried out by Sasaki and Associates, was mindful of green area, trees, water features, and hardscape. A significant landscape feature included a pond that not only ties the waterways together, but ties the continuity of the Wassenaar landscape into the site.  Due to the predominant use of brick in the Netherlands, the design team chose red brick as the primary façade material.  The use of brick is also suggestive of fine American brick buildings.

The project is registered with the U.S. Green Building Council and has achieved Leadership in Energy and Environmental Design (LEED®) Silver certification.  The site has a high water table, as well as an abundance of rainfall. The embassy captures rain, and reuses it for any irrigation needed to sustain the plantings.  The Embassy is projected to reduce energy costs by 30% compared with a conventional building.  This saving is accomplished through the use of ground source heat pumps for both heating and cooling; light emitting diode (LED) site lighting; and other sustainable features.  The facility is a model of accessibility.  OBO worked with the municipality to extend entrance routes to the existing nearby transit stops.  Although the site contains many water features, it is seamlessly knitted together with accessible pedestrian routes.

Curated by the Office of Art in Embassies, the art collection for the new Embassy in The Netherlands features art in a variety of media, including painting, photography, textile, sculpture, and video, by U.S., Dutch and Dutch American artists. Celebrating The Netherlands’ rich artistic traditions, the works extend the genres of landscape, portraiture, still life, and design into the 21st century. Two of the works are site-responsive commissions. One is an outdoor sculpture by U.S. artist Pard Morrison and the other is a textile mural by Dutch artist Claudy Jongstra. The ultimate focus of the collection is to create a rich dialogue of shared cultural values between the United States and The Netherlands.