In 1782 John Adams, later to become second President of the United States, was America’s first Minister Plenipotentiary to Holland. In the same year came formal recognition by the Netherlands of the United States as a separate and independent nation, along with badly needed financial help that indicated faith in its future.

These loans from Friesland and the United Provinces, which have been called “the Marshall plan in reverse” were the first the new government received.

For more than 200 years the bonds between the United States and the Netherlands have remained strong. Our diplomatic ties constitute one of the longest unbroken diplomatic relationships with any foreign country.

Coins and Postage Stamps that relate to U.S. - NL Relations 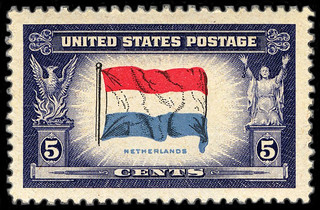