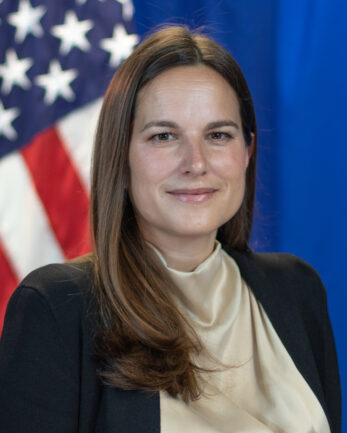 Kate Nanavatty, a career U.S. foreign service officer, assumed her position as Consul General at the U.S. Consulate General in Amsterdam in July 2022.

Kate’s career at the U.S. Department of State encompasses domestic leadership positions, overseas tours in sub-Saharan Africa and Southeast Asia, and teaching roles.  Her domestic assignments include serving as Chief of Staff to former Deputy Secretary of State Ambassador John Sullivan and subsequently to former Deputy Secretary of State Stephen Biegun.  She also served as the Burma Desk Officer from 2010-2012.

Kate has invested significantly in the careers of colleagues and rising public service officers.  As a Rusk Fellow, Kate taught graduate seminars at Georgetown University’s Institute for the Study of Diplomacy.  She has also taught leadership courses at the State Department’s Foreign Service Institute (FSI), including co-chairing the National Security Executive Leadership Seminar.  She most recently served as the Acting Director of FSI’s Leadership and Management School’s Leadership and Executive Development Divisions.

Kate grew up in Pound Ridge, New York with her parents and brother.  Before joining the Foreign Service, she worked at the World Bank Group, as a research assistant at the U.S. Institute for Peace, and as a tennis instructor.  She was awarded the State Department’s Distinguished Honor Award in 2020.