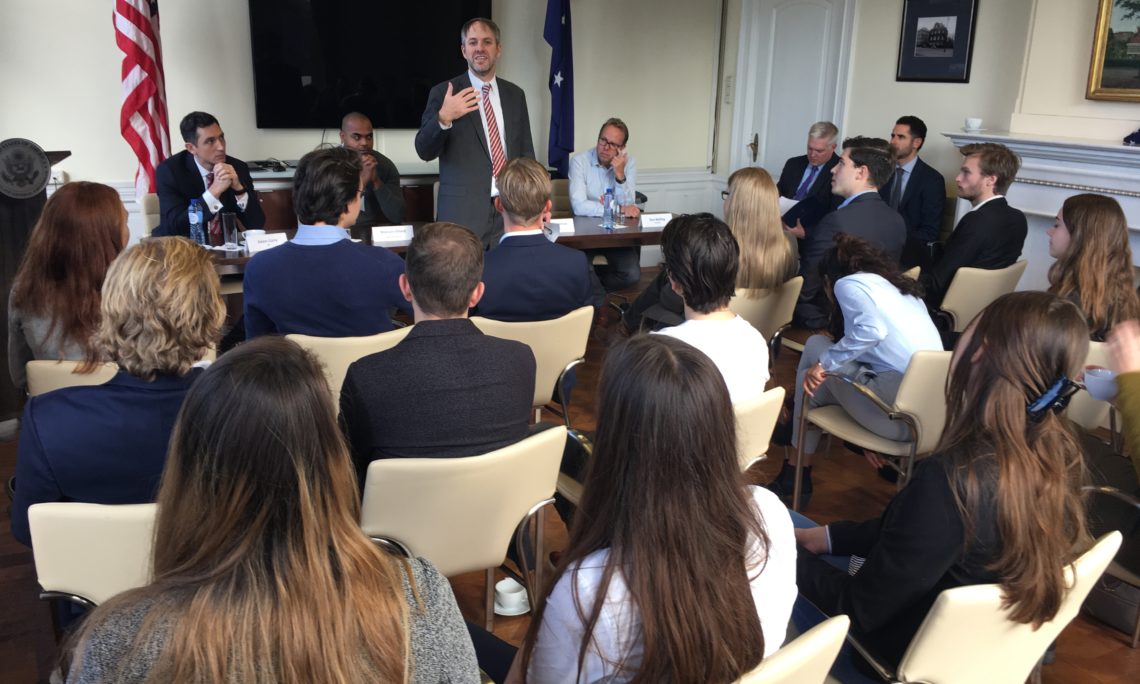 CG McCawley greets students and panelists for a cyber security and entrepreneurship event in Amsterdam.

More than 20 students attended a panel discussion on Cybersecurity and Entrepreneurship at the U.S. Consulate in Amsterdam on Monday. The students, from the Vrije Universiteit’s School of Business and Economics in Amsterdam, participated fully in the discussion that touched on cyber threats as well as how to start businesses to deal with them.

Leading the discussions were: Dirk Husselman of ThingLogix; Maeson Ethard, senior adviser at BaseCybersecurity; Tom Welling, pre-sales engineer Global and Enterprise Accounts at Palo Alto Networks; and Adam Corry, assistant legal attaché at the U.S. Embassy in The Hague. The event was opened by Consul General David McCawley. It was organized as part of National Cybersecurity Awareness Month.

Panelists began by discussing some of the cyber threats faced today, as well as a few of the most high-profile incursions and theft of personal, financial, and government data. They also discussed personal and governmental steps that could be taken to address such threats, and how to protect one’s personal information.

This being a group of business students, the conversation quickly turned to entrepreneurship and how the younger generation can contribute to combating this ever-more- pervasive threat.
The panelists talked about their own personal experiences. They said that students should take advantage of what is in front of them, find their passion – and not be afraid to fail. No matter what they’re doing, however, and no matter at what level, the students were told it was important to work hard and develop a reputation for hard work and reliability: a good personal brand.

Taking advantage of what lies directly ahead means applying for that internship, even if it’s not precisely what’s in the game plan. Gain experience, broaden knowledge. While the panel did not necessarily think it was vital for the students to be masters of programming, they should know how it works. That way they can ask more intelligent questions, develop better products.

More than anything, though, the message was “be prepared for change.” The rules of the game are forever changing. The quote attributed to carmaker Henry Ford – “If I had asked people what they wanted, they would have said faster horses” – was
brought up. With automation, artificial intelligence, and ever-growing computer power, it is impossible to use today’s framework to predict what sort of challenges and opportunities lie in the future. And entrepreneurship means being prepared to take risks, to fail, to keep pushing.

The students were urged to be involved when it comes to cybersecurity. Participate in Democracy. Ask questions. Let your government know what you are prepared to accept. Be involved.