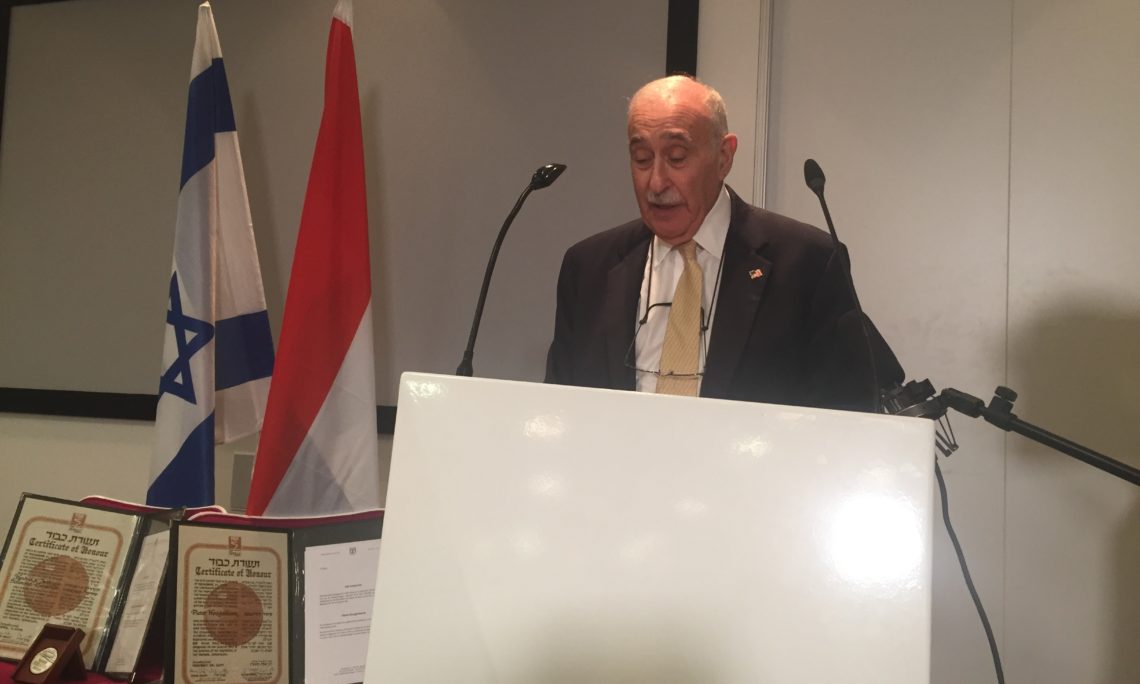 Leo S. Ullman was one of the lucky ones.

It probably didn’t feel much like luck at the time. He was taken away from his parents. He had to stay with strangers for more than two years. He had to disappear, given false papers. Become illegal. He ended up in an orphanage. His parents had to hide in an attic, “live like rats” for the duration of World War II.

Still, because of the bravery of Dutch strangers, Ullman and his parents survived the Nazi occupation of the Netherlands. So many of their Jewish brethren did not. A higher percentage of Jews were murdered in the Netherlands than in any other Western European country, more than 80 percent. In 1947, the Ullmans took off for the United States. There, “they quickly grew roots, becoming active and involved in their chosen community, and were able to succeed with zeal and good fortune.” Leo Ullman went on to study at Harvard and become a U.S. Marine.

He also never forgot those who had helped him: Pieter Hoogenboom, a policeman from Utrecht who provided the family with false papers, and Hendrik and Jannigje Schimmel-Manschot, in whose house he stayed, his identity hidden, for 796 days.

So, Ullman nominated them for Yad Vashem. This is Israel’s official memorial and, among others, it honors “Gentiles who selflessly aided Jews in need.” Once the research into their actions was complete, Hogenboom and the Schimmel-Manschots were granted honorary Israeli citizenship and their names placed in the Garden of the Righteous Among Nations in Jerusalem. It is a high honor.

Yad Vashem refers to a verse in the book of Isaiah, which reads: “To them I will give within my temple and its walls a memorial and a name better than sons and daughters; I will give them an everlasting name that will endure forever.”

Ullman and ten members of his family came to Amsterdam for the ceremony, organized by the Israeli Embassy and held at the Jewish Historical Museum. Family members of the honorees, with whom Ullman had already been in touch, were also there.

Pieter Hoogenboom, the policeman, was a family friend of the Ullmans. He and his son of the same name provided false papers to Jewish families, according to Ullman’s book 796 Days. Several of Ullman’s family members stayed for some time with Hoogenboom himself. It was the Dutch Reformed Church that eventually put the Ullmans in touch with Anton Schimmel, whose parents took in Ullman for almost two and a half years. He called them Oma and Opa, granny and grandfather.

Pieter Hoogenboom, the grandson and son of the two Pieter Hoogenbooms, accepted the certificate and medal. He said his grandfather was no hero. Rather, he was just a typically stubborn Dutchman determined to do the right thing. He also didn’t like being told what to do by the Germans. Still, his stories about how close his father and grandfather came to being caught were spine tingling. Everyone knew that being caught helping Jews was a death penalty for the whole family, he said. The risks were real, the consequences devastating.

Ullman, born in 1939, is a relentlessly upbeat man, who competed in and completed a senior triathlon in Rotterdam the day before the ceremony. He noted that none of the family members who accompanied him to the ceremony would even exist had it not been for the unimaginable bravery – or the stubborn determination to do the right thing – of the people being honored.

In 1947, Leo’s family moved to the United States and settled in New York. Ullman remembers seeing the Statue of Liberty from the deck of the ship that brought him there. He remembers looking at his mother beside him, tears streaming down her face. “We made it; we beat Hitler,” she said.

They made it because of the quiet heroism of Dutch people determined to do the right thing, people now honored for their courage.