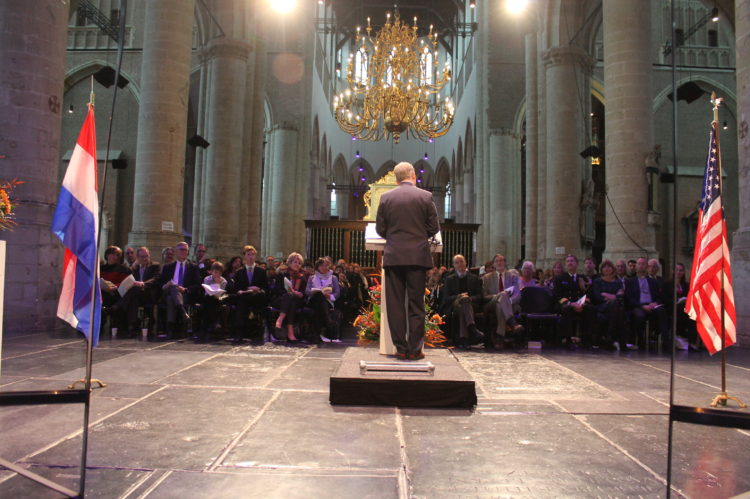 This was the church where the lives of the Pilgrims were recorded: their births, marriages, and deaths. Their minister, John Robinson, was buried here. This is the Pieterskerk in Leiden.  After fleeing England in 1609, the Pilgrims found their way to Leiden, by way of Amsterdam. They stayed here until 1620, when a group of them departed from here to Delfshaven to board The Speedwell. From there they set sail to England to meet up with other Pilgrims who were heading for the New World. The Speedwell, deemed unseaworthy, never made it to America, but about 30 of the Leiden pilgrims boarded the Mayflower and set sail.

It has been said that without Leiden, there would not have been a Plymouth. So, every year Overseas Americans Remember organizes a Thanksgiving Day Service in the Pieterskerk, the place that so binds together the Netherlands and the United States. That tie was symbolized by Ria Van der Voort-Koet and Capt. Robert Buzzell, the Defense Attaché. They both told of their Pilgrim forefathers and how important it was to hold a day of thanks in the Pieterskerk in the place that allowed them to worship freely.

Crowley also read from President Trump’s Thanksgiving Proclamation, “In July 1620, more than 100 Pilgrims boarded the Mayflower, fleeing religious persecution and seeking freedom and opportunity in a new and unfamiliar place … Those who endured the incredible hardship of their first year in America … had many reasons for gratitude. … the new governor of the Plymouth Colony … proclaimed a day of Thanksgiving.”