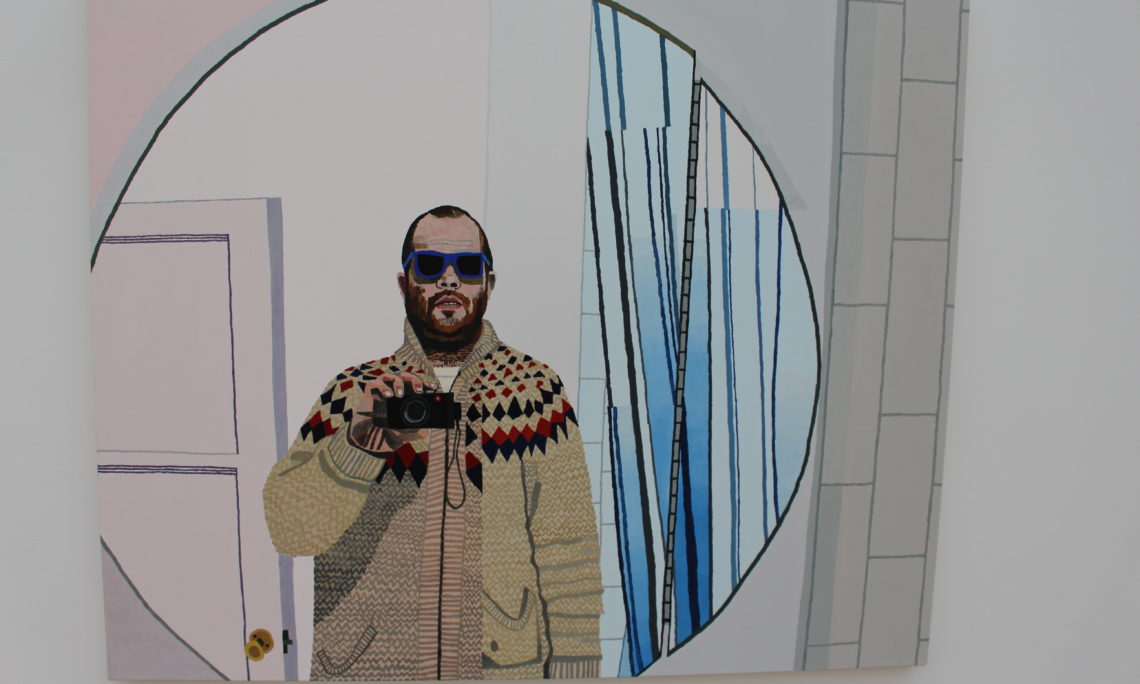 Self Portrait with Blue Sunglasses.

Museum Voorlinden, which celebrated its one-year anniversary on Sept. 11, opened an exhibit by Los Angeles-based artists Shio Kusaka and Jonas Wood on September 28.

With this exhibit, which runs through January 7, the modern and contemporary art museum kicked off its year-long American Season series. Also to be featured in this series are Martin Puryear and Wayne Thiebaud. Puryear, of New York, works in wood and bronze. Thiebaud, of California, is best known for his colorful paintings featuring candies. He will be 97 by the time his exhibit opens here.

Wood, from Boston, is married to the Japanese Kusaka. They have been working out of L.A. for over 10 years. While this is the first time their work has been exhibited together at a museum, they have a uniquely symbiotic way of working with and off each other. They inspire one another, complement and amplify each other’s work, but yet do not work directly together.

“While Shio and Jonas may work in different artistic disciplines, just as their lives are interwoven, so is their respective art. They are one another’s muse,” according to the program for their exhibit. “The mutual influence is most immediately visible in Jonas’ paintings, whose subjects include pots and objects made by Shio. Shio, in turn, takes patterns from sports equipment and the shapes of other daily objects found in the work of Jonas, and adopts them into her own work. The result is a visual dance between the two artists. In their individual investigations of line and form, we can see an interplay as well.”

The Woods are also inspired by their roots. Shio’s pottery draws heavily from traditional Japanese artistic styles, including intentional imperfections in her pottery in a technique known as Wabi-Sabi, while many of Jonas’ works are inspired by childhood memories, or neighborhoods or houses he’s lived in during the course of his life.

Wood said that the exhibit came about after Joop van Caldenborgh, the owner of Voorlinden Museum and a renowned art collector, bout a series of Wood’s paintings.

Shio likes her pottery to be displayed as a large group of pots, a cluster allows for easier comparing and contrasting by the viewer. It allows one to take in the uniqueness of each pot or vase when the vase is displayed there next to five or ten others, each with their own different colors and qualities. The titles of Shio’s pottery are interestingly titled after their methods of creation. For example ‘Carved 56,’ or ‘Mark 33.’

Plants play a major role in Jonas’ art. Their bright colors and abstract shapes are a natural draw for an artist focused on the sort of style that Wood specializes in. Cacti are a particular favorite, perhaps an influence of the California flora they’ve been living among for the past ten years.

The couple live in L.A. together with their own studio and with their son and daughter. The two co-author an art book series under the name Wood Kusaka Studios.