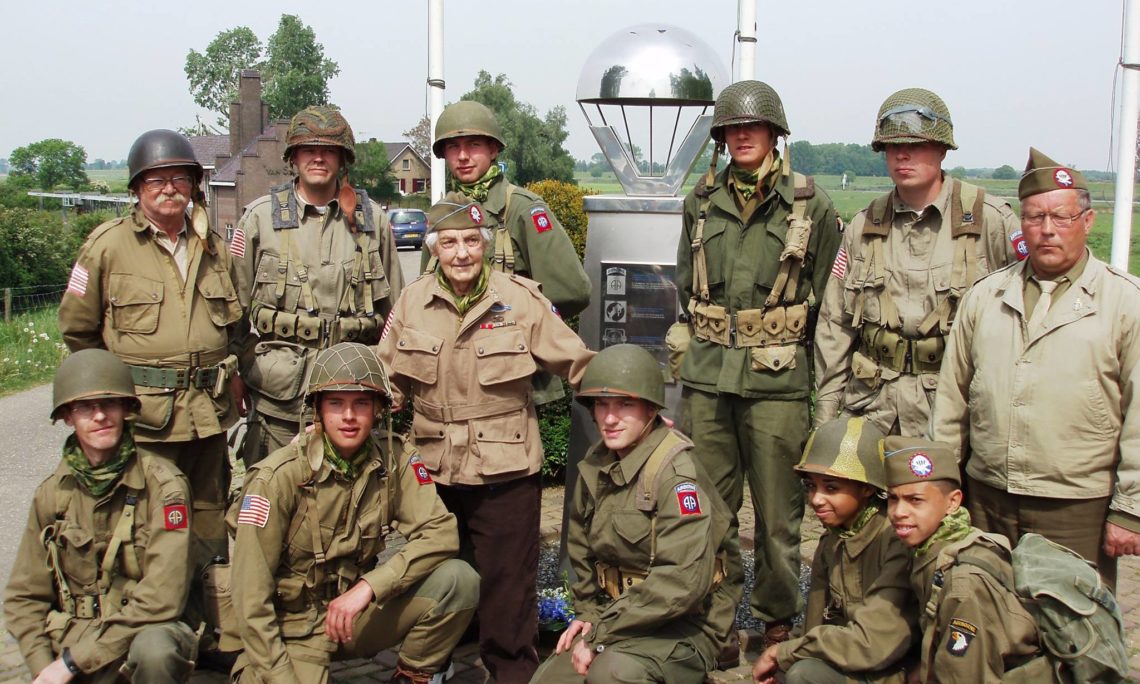 George Roth, the last remaining member of E-Company, 504th Parachute Infantry Regiment, with members of the Kazemattenmuseum in Grave during one of his last visits to the town he helped liberate during Operation Market Garden (Courtesy of Graafse Kazemattenmuseum.)

It was 8:45 p.m. and getting dark. It was drizzling. And still a group of locals from Grave, the Netherlands, came to remember a man most of them had never met who was being buried – at that precise moment – 5,600 miles away in Riverside, California.

George Roth, 98, died on July 24 and was buried Aug. 2 in Riverside National Cemetery. In the Netherlands, Mayor Lex Roolvink reminded those present that freedom cannot be taken for granted, that it came at a price men like Roth were willing to pay. On September 17th, 1944, E-Company of the 504th Parachute Infantry Regiment – which was later later attached to the newly designated 82nd Airborne Division – landed two miles from the spot of the remembrance ceremony. Roth, who had seen heavy fighting with his regiment in Italy, parachuted into Holland with them in the offensive known as Operation Market Garden. One of his friends who jumped with him didn’t survive the jump. The objective was the Graafse bridge over the river Maas. It was taken by 1st Lt. John S. Thompson, after whom it is now named, and a small band of men after a firefight with the Germans. Roth and the rest of the men from “Easy” company took the town of Hoogveldseweg and held it for three days until British tanks arrived.

That, of course, was not the end for Roth. He barely escaped death in Erlecom, when a German mortar hit a building he had just left. Three of his fellow paratroopers were not so lucky. The Thiel family, who now occupy that farmhouse, were at the ceremony in Grave. From there, it was on to the Ardennes during the brutal winter of 1944. It was so cold there that a medic told Roth he would have to have one of his little toes amputated. It had been riddled with frostbite. Roth asked the doctor if he could take the other little toe also – so that he wouldn’t have trouble buying shoes for the rest of his life. Martin Dekkers, a friend of Roth’s, said at the ceremony that he can verify that story, having seen Roth’s bare feet.

I asked Dekkers why he was so interested in these long-lost battles of World War II. He led me to a corner of the road, not 100 meters from where the 504th PIR Memorial now stands. On September 20, 1944, when he was just six years old, his family had cycled 20 kilometres behind enemy lines to come and see the Allied liberators. Here, he said, was where he first caught sight of the British for whom Easy Company had held the bridge. It was a sight, he said, that he remembers as if it were yesterday. And Roth, he added, was the last of the men from Easy company. All the others had died before him.

Dekkers, who got to know Roth during one of his visits to Grave, read from his “last letter” to Roth. The two had become close friends, and Dekkers wrote to Roth frequently. He sent his letter to Roth’s relatives in the States. It was to be read at Roth’s funeral that was taking place at exactly the same time as this small, but powerful ceremony on the banks of the Maas River.

“George,” he read. “After today I cannot write letters to you anymore with stories of our museum and commemorations. I will miss you very much and I hope you find peace between your veteran friends in the beautiful cemetery in California. Thank you so much for your share in our Liberation and for the friendship you gave me.”

With that, a lone bugler played Taps, the American flag was raised to the strains of the Star-Spangled Banner, and two wreaths were laid. Then those who had gathered decamped for the town’s museum for a cup of coffee and stories about World War II and the men who had come to liberate their country.

Here is the full text of Dekkers’ letter to his friend George Roth:

On September 17th, 1944, you landed with your E-Company, 504 Parachute Infantry Regiment (PIR) two miles west of the place where your friends from Holland are at this very moment standing to remember you in a special service at the 82nd Airborne Monument south of Grave Bridge.

Your buddy Curtis Morris from Lake Charles, Louisiana, also jumped with you, but the suspension lines of his canopy tangled. He fell down through a plum tree on a farmyard, and died two hours later.

You had been in Holland before when your parents and three siblings immigrated from Cserephalu to the United States, where your uncle (your father’s eldest brother) had found a new existence. Your father was a soldier in the Austrian-Hungarian Army in WWI, and you were born four days before the end of that war, on November 7th , 1918.

You told me that in high school you were a candidate for the Olympic Games. In 1942, at age 23, you enlisted and successfully passed the training for paratrooper. You were the smallest of E-Company, and when I first saw you at Hotel Erica in 2008 I noted that I was taller than you, which seldom happens for me.

On May 10th, 1943, your Regiment arrived by boat in Casablanca. Two months later on July 9th, 1943, your 504th Regiment landed on Sicily, becoming the first allied unit to land on European soil. You told me that a day after your landing, you witnessed the German bomber attack on allied ships off the Coast of Sicily, and discovered at the same moment the supplementary units of 504th PIR arriving in the dark from North Africa, flying at an altitude of only 150 meters. You and your friends shouted in vain to warn the ships not to shoot at the C-47s with paratroopers. Out of 144 approaching allied planes, 37 planes were shot down (by friendly fire) with their paratroopers onboard.

After the dropping at Salerno, your regiment marched into Naples, which must have been such a great moment of joy for both you and the people in the city. Unfortunately, the joy ended when you were transported to the Anzio area. The extreme fighting of your regiment around the Mussolini Canal was described by a German officer, who noted in his diary that “the devils in baggy pants make our life very difficult.” This German description became the title of honor for your 504th regiment. Finally, the 82nd Airborne Division left Italy without your regiment to begin training for D-Day, while you continued your fights in central Italy. On June 5th, 1944, you had to stay in England, waiting for the next action after Normandy.

On September 20th, 1944, three days after your landing at Velp/Grave, I was six years old and standing along the road with my parents just 100 meters south of the Airborne Monument in Holland to welcome Allied soldiers passing by on their way to Nijmegen. Hundreds of civilians from my village, Rijkevoort, and other villages east of Grave rode bicycles 20 kilometres through the German lines on gravel roads to meet our liberators. I think that you were on your way to Nijmegen that day, and units of the 504 Regiment crossed the Waal (Rhine) River in Nijmegen that afternoon and lost 48 paratroopers. Every evening at sunset – to this day – Dutch veterans cross the new bridge “The Crossing” to honor those members of 504th Regiment. Forty-eight lamposts shine in intervals.

At the end of September 1944, you found yourself in a defensive line from Erlecom on the Rhine via the Thornsche Mill to Devil’s Mountain east of Groesbeek. On October 3rd, the command post of E-Company was set up in the farm of the van Thiel family in Erlecom, 200 meters south of the Rhine River. The roof
of the farmhouse had been destroyed and the CP was situated in the cellar. When we visited this place (a few years ago), you told me that just one minute after your departure the cellar was hit by a German mortar, killing three paratroopers. Captain Van Poyk and his six-person staff were badly wounded. To commemorate this dramatic event, you unveiled a plaque on the farm during your last visit to Holland on May 4th, 2011. You told me that the wounded sergeant Dumas, who had lost a leg, was your commander. The farmer’s daughters Sanne and Inge van Thiel gave a speech during your unveiling, saying: “Where we play now, you have fought. It is very special for me, my sister, and my family to live here and now in Holland. Thank you very much!”

On December 17th, 1944, a new episode of your time in war began when your 82nd Airborne Division was rushed from your camp in France into the Belgian Ardennes in open trucks to stop a very dangerous German counter-attack on a weak part of the allied defensive line on the Belgian-German frontier. Again
you and your regiment became famous during your fights at Bra, Cheneus, Floret, and Lierneux. Your Christmas in 1944 was terrible, spent in the cold in an open field and woods. The Allied air force was blocked by fog and German artillery used the feared 88mm guns, killing and wounding many paratroopers. After the Christmas fog disappeared, the air force was able to bomb the German attackers. Meanwhile, General Patton pushed his tanks from France towards Bastogne. The lack of fuel in the German army forced the Germans to retreat in January 1945. From this campaign in the Ardennes, you were left with two amputated toes.

Because of you, dear George, my interest in the history of the 82nd Airborne Division has grown very strong since our first meeting in 2008. You have become for me the example of so many American boys in their early twenties who decided to fight for the liberation of Europe. Millions of young men had the same motivation as you, George, and during WWII 405,000 of these Americans payed for our freedom with their lives. They are also buried in Holland, at the American Military Cemetery in Margraten, where some of your friends are also resting.

George, after today I cannot write letters to you anymore with stories of our museums and commemorations. I will miss you Very much and I hope you find peace between your veteran friends on the beautiful cemetery in California. Thank you so much for your share in our Liberation and for the friendship you gave me.

More pictures of the event.