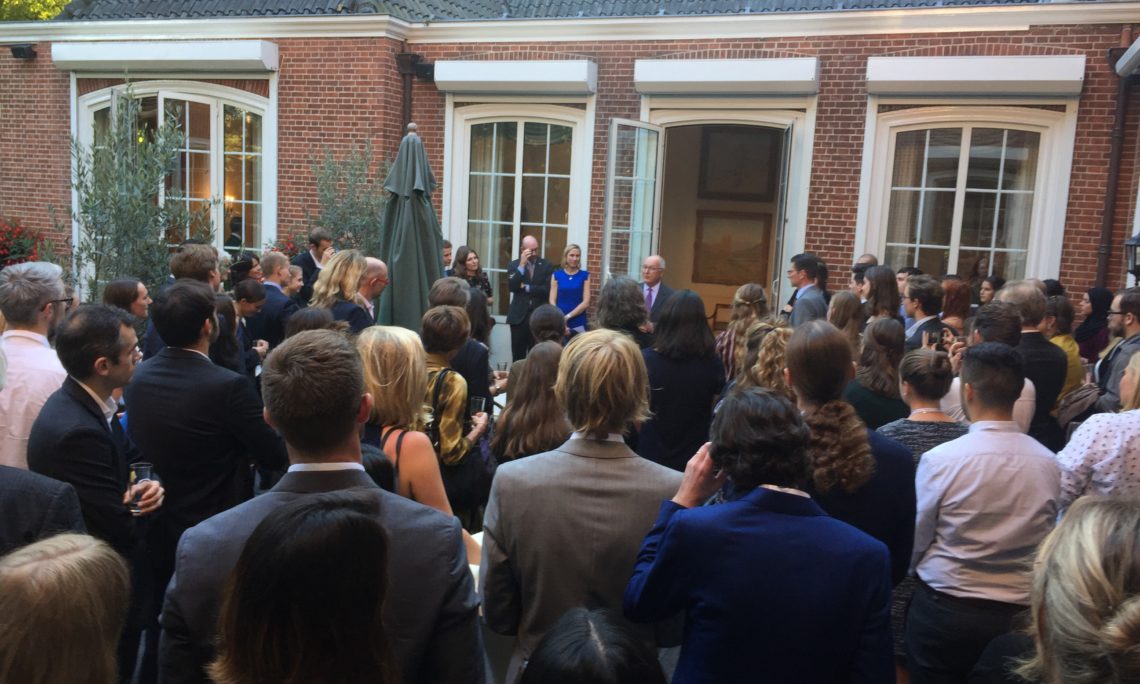 At two events this week, Ambassador Pete Hoekstra celebrated the U.S. Department of State’s exchange programs with alumni who participated as long ago as the 1970s to as recently as earlier this year.

From Fulbright to the International Visitor Leadership Program (IVLP), and from the Benjamin Franklin Transatlantic Fellowship (BFTF) to Women2Women (W2W), the Transatlantic Inclusion Leaders Network (TILN), and the Young Transatlantic Innovation Leaders Initiative (YTILI), U.S. Embassy The Hague has sponsored thousands of visits by Dutch citizens to the United States over the years.

On Monday, Ambassador Hoekstra invited alumni from the International Visitor Leadership Program (IVLP) to his residence.  IVLP was launched in 1940 to help the United States strengthen its ties with countries around the

world by connecting current and emerging foreign leaders with their American counterparts – be it in technology, security, entrepreneurial, political, educational or defense-related fields.  Over the years, U.S. Embassy The Hague has sent more than 500 Dutch citizens to the United States on various IVLP programs.

During remarks, Ambassador Hoekstra stressed the strong historic bonds between the United States and the Netherlands.  Still, he emphasized, such exchanges – which take place all over the United States and not just in East Coast metropolitan areas – allow the Dutch to gain a deeper understanding about the American people and the culture of a diverse country.

On Thursday, more than 120 people involved with Fulbright – Dutch government partners, sponsors, board members, teachers, alumni, and current U.S. Fulbrighters – also met at the Ambassador’s Residence to salute the value of exchanges, relationship building, as well as the legacy of Senator J. William Fulbright.

The point of these gatherings is to keep alive the relationships – between the United States and the Dutch alumni, and between the Dutch alumni themselves.  These exchange programs are about connecting people, but also about swapping ideas and best practices – to learn from one another.  They are also about keeping in touch once alumni return home.

The Fulbright Program was established in 1946 and came to the Netherlands in 1950.  It is a bi-national program, jointly funded by the governments of the United States and the Netherlands.  Since then, more than 300,000 students have reaped the benefits of a superior education while experiencing the life-changing opportunity of not only living abroad, but also being an Ambassador for their home country.  Senator Fulbright was an ardent believer that increased mutual understanding – a people-to-people bridge built between the nations of the world – was the most important way to avoid conflict.

So, each year we celebrate the programs intended to achieve exactly that.