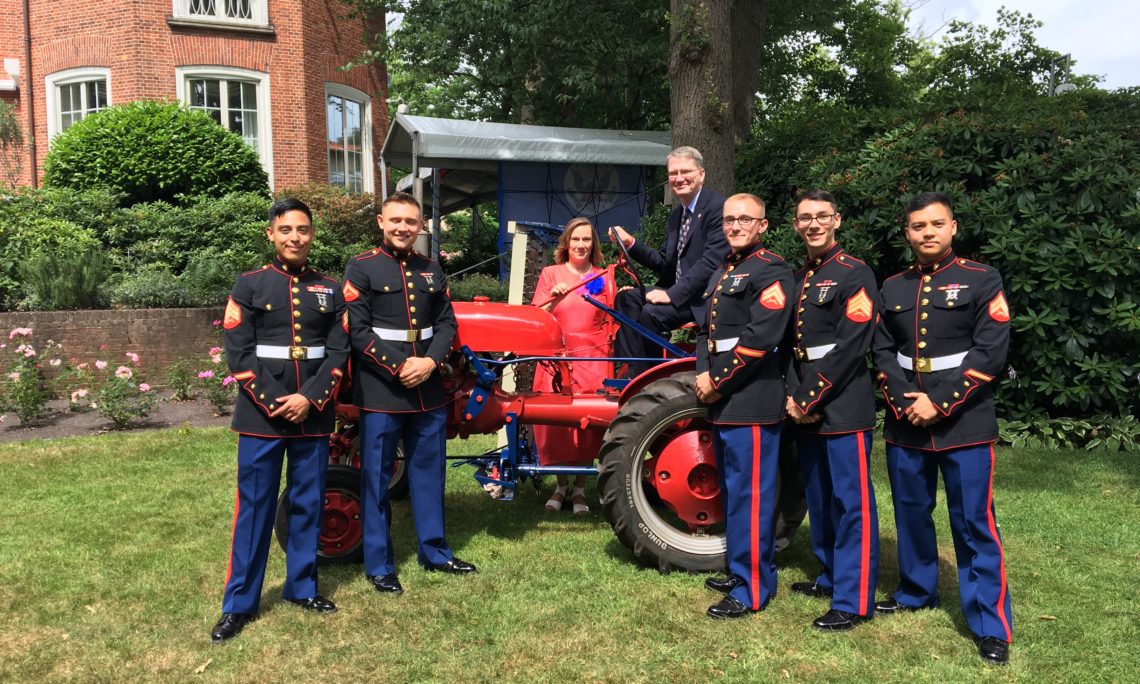 CDA Shawn Crowley (on tractor), his wife Sabine, and members of the U.S. Embassy Marine Security Guard Detachment pose with a McCormick Farmall Cub tractor that arrived in the Netherlands in 1948 as Marshall Plan aid.

Photo Gallery of the Event

Video of the Event

Goedenmiddag!  Sabine and I are glad that you could join your friends from the Embassy, Consulate General, OPCW, and Europol to celebrate the 241st anniversary of our Declaration of Independence.  Many thanks to our excellent Marine Security Guards for posting the colors and to Jael Langeweg and pianist Ruben Houvast for their moving renditions of the national anthems.

This wonderful event is the result of the hard work of many, many people from the Embassy, Consulate General, and residence.  They are the best team I have seen in 27 years in the Department of State.  I would also like to express our gratitude to our sponsors, many of whom are recognized on the banners here in the tent.  Without their generous contributions, this great tradition in The Hague would not be possible.  If it wasn’t for them, we’d probably be standing in the rain without any of the great American food and drinks available here today.  Thank you.

The Fourth of July is a day of fun, family, and friends in the United States.  It is celebrated with barbecues, baseball games, parades, concerts, and fireworks.  We hope that our guests here today will catch a bit of that spirit.

Independence Day is also a time for Americans to celebrate our history and values.  It commemorates the publication of our Declaration of Independence, written by a committee of five, including the future representative to the Netherlands John Adams.  Its words describe the American dream and governmental system better than any others:  “We hold these truths to be self-evident, that all men are created equal, that they are endowed by their creator with certain unalienable rights, that among these are life, liberty, and the pursuit of happiness.  That to secure these rights, governments are instituted among men, deriving their just powers from the consent of the governed.”

As you know, it took us time to extend these unalienable rights to all American citizens, to all genders, races, and creeds.  These noble sentiments have nevertheless been a source of constant aspiration for the self-improvement of our nation.  They are reflected in the Emancipation Proclamation, the struggle for women’s suffrage, and the Civil Rights movement.  They remain the central aspect of our American identity today.

These shared values are also the foundation of our relationship with the Netherlands.  The Dutch were the first to recognize the new American republic with a salute in Sint Eustatius in 1776.  They signed a “Treaty of Amity and Commerce” in 1782 and provided valuable financial assistance in our struggle for independence.  These ties make the U.S.-Dutch connection our longest, unbroken, peaceful relationship with any country in the world.  I am pleased that you could join us here this afternoon to continue that tradition.  We thank you for your assistance and for your always honest and direct advice.  Eerlijkheid duurt het langst.

Together we are more prosperous.  The Netherlands remains the third-largest investor in the United States, supporting approximately 700,000 American jobs.  In return, more than 2,700 U.S. companies–many of them represented here today–directly employ around a quarter of a million people here and generate almost five percent of Dutch GDP.

Together we are safer and more secure.  Following our joint struggle in World War II, we were founding members of the NATO Alliance.  Our soldiers, sailors, marines, and air force personnel serve together in the Netherlands, in the United States, and in the Caribbean, but also in the Balkans, Baltics, Mediterranean, and Afghanistan.  We work together against extremists in Africa and the Middle East.  Our law enforcement personnel cooperate daily in Europol and on bilateral investigations.

Together we are better able to advance our shared values around the world.  We stand together on human rights, religious freedom, tolerance, diversity, and in the fight against human trafficking.

As you may have noticed from some of our decorations, such as the tractor, this year marks a special milestone in our relationship.  Secretary of State George Marshall proposed the European Recovery Program 70 years ago to help rebuild the economies and the spirits of 16 nations. These included the Netherlands, but also our former enemies during the war.  U.S. taxpayers provided almost 13 billion dollars in aid from 1947 to 1952, including 1 billion dollars to the Netherlands.  In the end, this country received more assistance per person than any other EU nation, aid worth more than $1,700 per capita today.

The Marshall Plan restored confidence and set the stage for an unprecedented era of prosperity, peace, and cooperation in Europe.  In 1954, former Prime Minister Willem Drees called the Marshall Plan “a symbol of what the effect of real cooperation can be for peaceful purposes in the world.”  Today, as we face new threats and uncertainties, we must do our part to ensure this cooperation continues.

Ik ben trots op de sterke band die de mensen van de Verenigde Staten en Nederland al eeuwenlang samenbrengt.  In the timeless words of John Adams, “There are no friends like the Dutch.”  Enjoy this celebration, the great food, and the music.  Thank you for the gezelligheid.