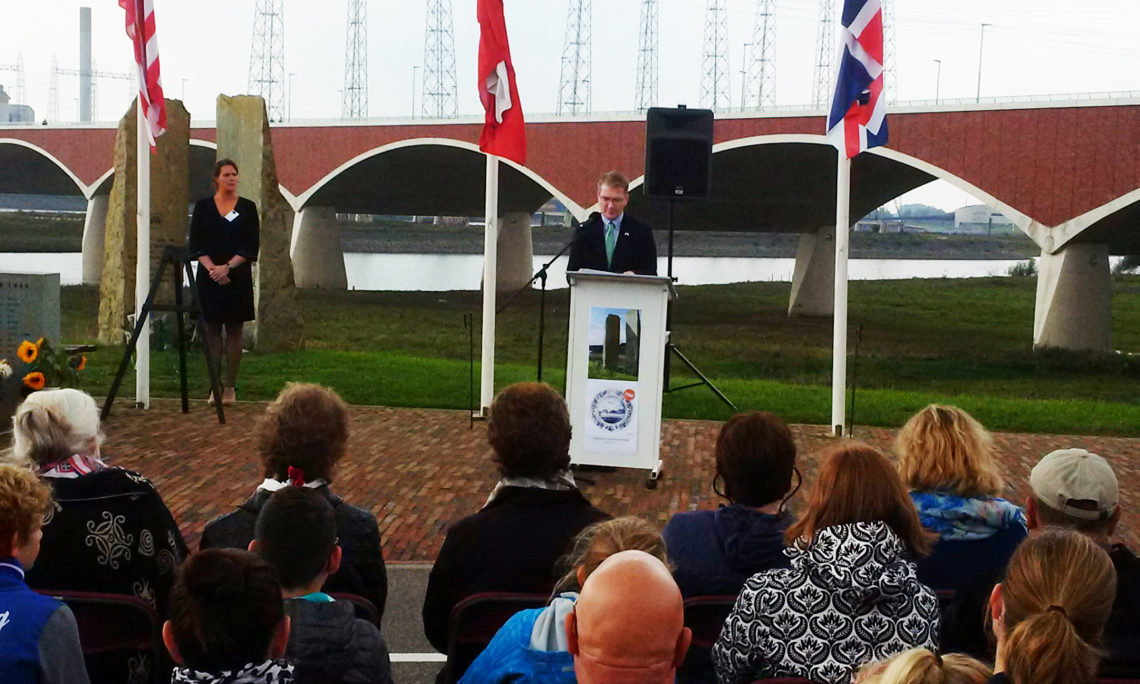 Mayor Bruls, Mayor Akkermans, Director van Afferen, distinguished veterans, ladies and gentlemen, and most importantly dear students.  Thank you for the opportunity to take part in this ceremony commemorating the 73rd anniversary of the Waal River Crossing and the liberation of Nijmegen by the courageous soldiers of the 82nd Airborne Division.

Their commander, General James Gavin, famously said that “if you want a decision, go to the point of danger.”  For the liberation of Nijmegen, we stand here at that point of danger.

It is hard to imagine that the beautiful and tranquil area surrounding us was once a place of such violence and misery.  Nevertheless, it was here, 73 years ago today, that the men of the 504th Parachute Infantry Regiment boldly dashed into the waters of the Waal with canvas boats.  Many of them were still teenagers.  Few knew much – if anything – about the Netherlands.  All of them had parents and loved ones praying for them to come home.  Yet they faced incredible hardship and danger to cross the river and clear the banks.  With help from other units, Allies, and Dutch citizens, they took the bridge and liberated Nijmegen after four years of Nazi occupation.  For many, it was the last action of their too-short lives.

For the past 73 years we have often been joined by veterans who made the crossing and could provide first-hand accounts of that day.  As the years go on, we must recommit ourselves to being the custodians of their memories, passing them on to our children and grandchildren.

Over the past weekend, many of us have attended dozens of ceremonies and events to commemorate Operation Market Garden.  This morning, I was honored to witness the liberation program at the Oversteek School.  The poems, stories, artwork, and history projects of Group Seven students pay meaningful tribute to the sacrifices of the hundred-plus paratroopers who were wounded and the 48 who died.  I find it incredibly meaningful that the people of Nijmegen have entrusted their youngest citizens with preserving the memory of the Waal crossing.

As we remember the past, let us also look to the future.  The sacrifice and friendship of the young soldiers who fought here are lessons for us all as we face threats to our common values and freedom today.  We owe it to them to do our part to safeguard the peace and prosperity made possible by their brave actions.

Mayor Bruls, on behalf of the people of the United States, we are humbled, and grateful, to you and the citizens of Nijmegen for the commitment you show in honoring the memory of those who fought for our freedom.