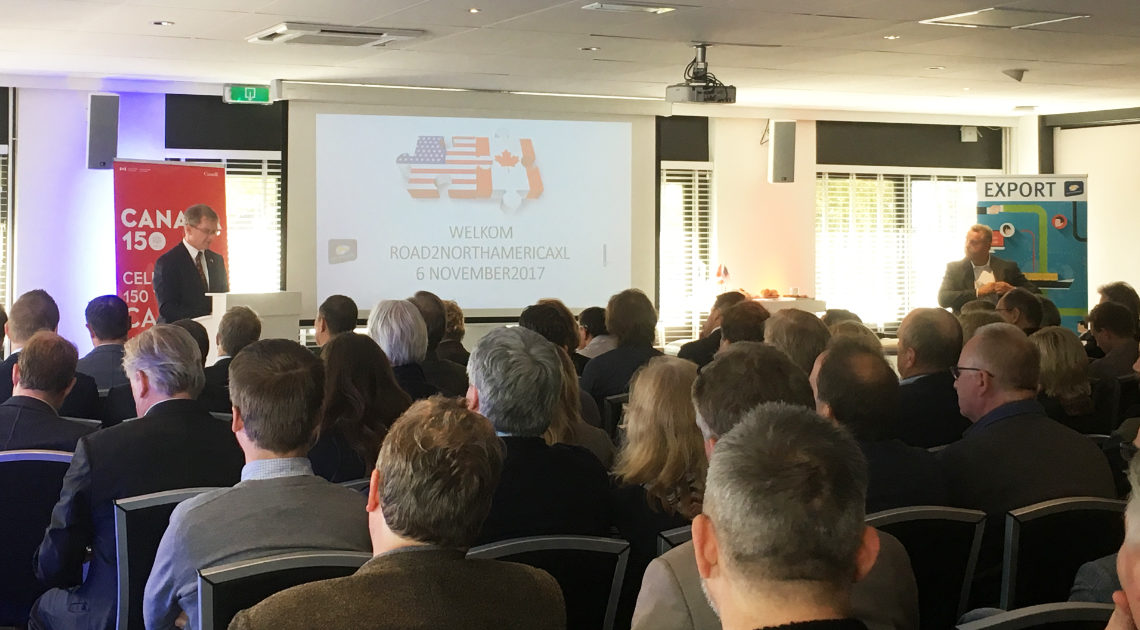 Chargé d’Affaires Crowley speaks to Dutch entrepreneurs at the Road2NorthAmerica XL event. The networking event, organized by Rijksdienst voor Ondernemend Nederland - RVO.nl and the Kamer van Koophandel, supports Dutch companies wanting to do business in the United States and Canada.

Chargé d’Affaires Shawn Crowley on Monday spoke to Dutch entrepreneurs at the Road2NorthAmerica XL event. The networking event, organized by Rijksdienst voor Ondernemend Nederland – RVO.nl and the Kamer van Koophandel, supports Dutch companies wanting to do business in the United States and Canada.

Crowley: Thank you, Mark.  Good afternoon, Madam Ambassador.  Good afternoon everyone.  I’m delighted to see so many of you at this seminar on expanding your business in North America.  I would like to thank the Kamer van Koophandel and the Dutch Ministries of Foreign Affairs and Economic Affairs for organizing today’s event and for their continued support over the past years.

As I am sure many of you know, the U.S. economy grew at an upgraded annual rate of 3.1% in the spring, the fastest pace in more than two years.  While that number is likely to drop a bit by the end of the year following a number of major hurricanes, the administration has set a target of returning to four percent growth in the coming years.  This figure exceeds the historical average for GDP growth of 3.22 percent from 1947 through 2017.  Our neighbors in Canada have experienced similar success.

Today’s event is designed to assist you in investing and expanding your businesses across the Atlantic.  As the saying on one of the buildings in Amsterdam near the Beurs van Berlage says, “de Kost Gaat Voor De Baat Uit.”  The United States offers investors highly skilled labor, competitive tax rates, one of the world’s best markets, and cutting edge innovation.  We want you to know that the U.S. Embassy has additional programs to assist Dutch companies seeking opportunities in the United States.

The Dutch-American partnership is our longest unbroken, peaceful relationship in the world.  Our close economic ties are not only good for business, they are key to the prosperity of both the American and Dutch people.  The Netherlands remains the third-largest investor in the United States, supporting nearly 750,000 American jobs.  In return, the United States is the largest investor in this country.  More than 2,700 U.S. companies directly employ around a quarter of a million workers here and generate almost five percent of Dutch GDP.

While the numbers are good, we would like to see these economic ties continue to grow.  I encourage you to speak to my colleague Philip Hammerstein about the SelectUSA program, which helps foreign investors in the U.S. market.  The Embassy has led delegations of Dutch companies to the last four SelectUSA Summits in Washington.  I recommend that you consider attending the 2018 Summit in June.  This meeting is intended to open doors, inform you about how to grow your business in the United States, and facilitate introductions with all 50 states.  Many of these states also have economic offices in Europe.  The representatives of Georgia and South Carolina, for example, were in The Hague last month speaking to Dutch companies.

Both the United States and Canada rank among the most attractive business locations in the world.  I hope today’s presentations and discussion will give you valuable insights into how to expand in North America.

Please do not hesitate to reach out to our Embassy staff if you need any assistance.  Thank you again for coming and I wish you a very informative day.  Mark, back to you.