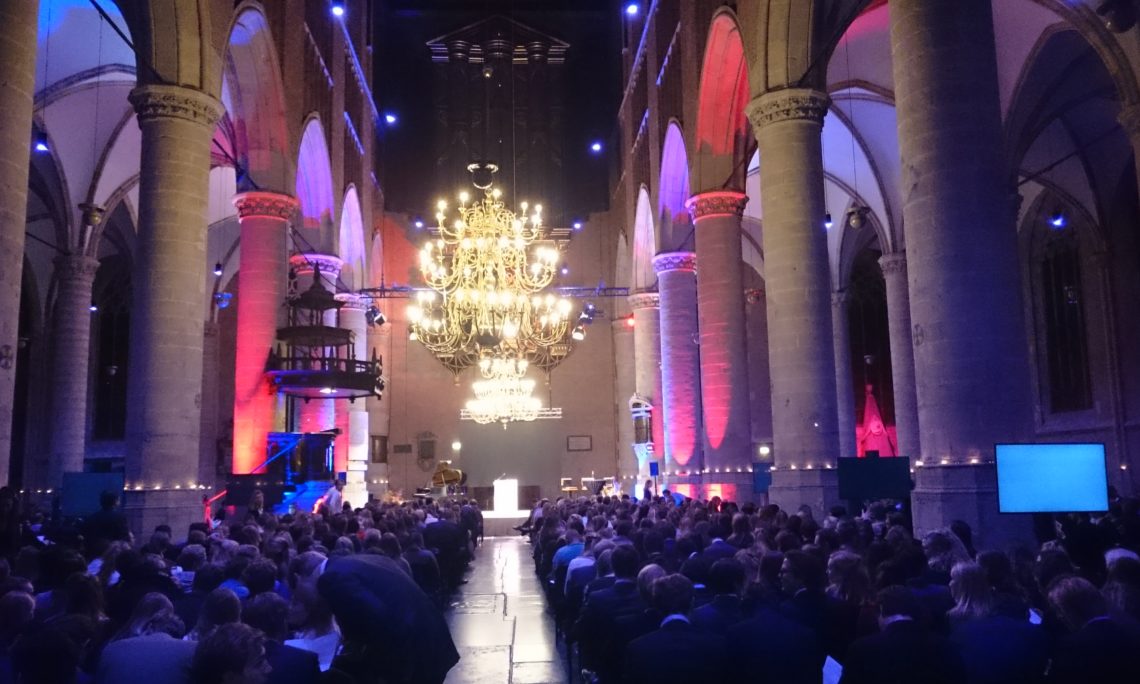 More than 1,000 students and faculty attended LSV Minerva's All American Night in Leiden.

More than 1,000 students and faculty attended the 13th edition of Minerva’s All American Night in Leiden’s magnificent Pieterskerk. Organized by the student members of Minerva Society, it was a night of politics, music, and even a play – the latest edition of a tradition that stretches back to the U.S. Presidential Election of 1968.

Chargé d’Affaires Shawn Crowley kicked off the event after a stirring rendition of The Star-Spangled Banner, performed by Jael Langeweg. He was followed by a distinguished group of experts, including Wim Geerts, secretary general of the Ministry of Foreign Affairs, a video appearance from Washington, D.C., by Dutch Ambassador Henne Schuwer, and Kirsten Verdel, who worked on the 2008 Obama campaign.

Student Julian Kramer had perhaps the hardest job of the evening: to give a 10-minute crash course on how the U.S. political system works. He pulled it off.

A big star of the evening was the Pieterskerk itself. Construction on the church began in 1390 and took 180 years to complete. From here, in 1620, some of the Pilgrim Fathers set sail for America. On Monday, the old church was illuminated by red, white, and blue lights that highlighted all the old splendor of the place.

The students of Minerva, a student club, were all in their finery for the evening, serenaded by a Jazz Band and even entertained by a play about the U.S. elections, produced and acted by students. The All American Night symposium this year will be followed by an election night party at Minerva.