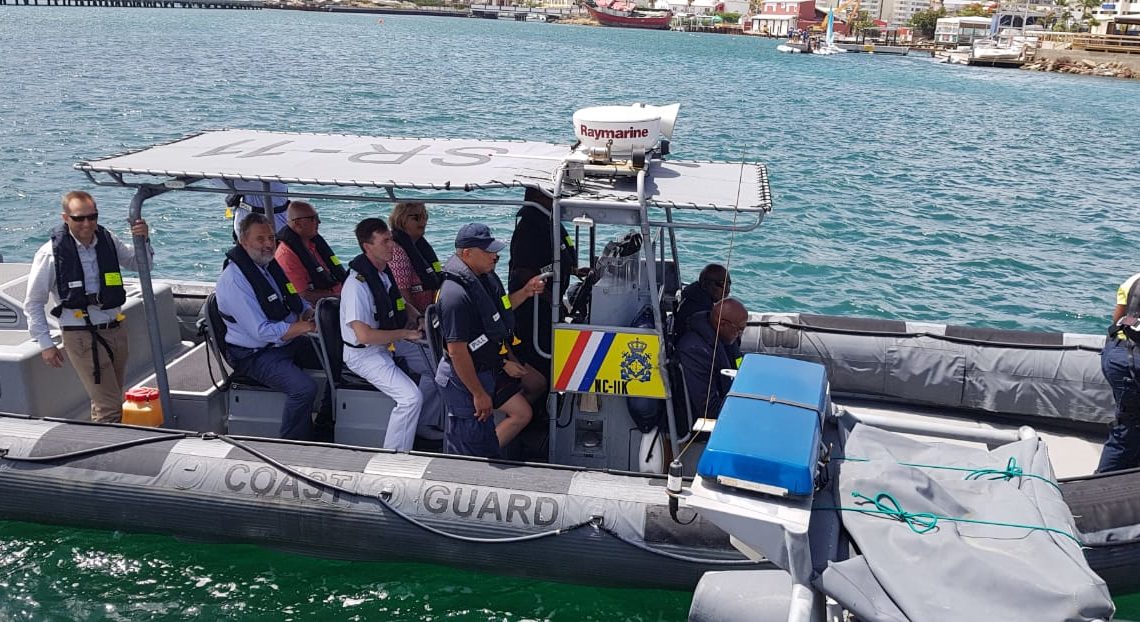 Delegation toured the lagoon on Sint Maarten To observe damage from Hurricane Irma.

Ambassador Pete Hoekstra visited the Dutch-Caribbean islands of Curacao, Aruba, and Sint Maarten July 14 to July 19. Through meetings with officials and exploration of local cultural and educational sites, his visit underscored the strength of the shared values between the United States and the Kingdom of the Netherlands. U.S. Consulate General Curaçao helped to organize his trip. He was joined by U.S. Embassy Defense Attaché Captain Mark Imblum, U.S. Consul General Margaret Hawthorne, and Dutch Ambassador to the U.S. Henne Schuwer.

Ambassador Hoekstra then traveled to Curacao, where he met with Prime Minister Eugene Rhuggenaath, Governor General Lucille George-Wout, and other officials. They discussed opportunities for future American investment on the island, information-sharing agreements, and other measures to strengthen international cooperation. The Ambassador also paid a visit to the U.S. 12th Air Force Forward Operating Location and Dutch naval base Parera to learn more about disaster response methods and preparedness. Highlights from his tour of the island include World War II monuments and visiting the oldest synagogue in the Western Hemisphere, Mikvé Israel-Emanuel, at which Dutch war hero George Maduro worshipped.  He also toured the Carmabi Foundation in Curaçao to learn about their research into fisheries and coral reefs.

In Aruba, the Ambassador spoke with officials from Customs and Border Protection Preclearance team. He also met with Governor Alfonso Boekhoudt and various ministers, including the Minister of Transportation and the Minister of Finance, Economic Affairs, and Culture. They had a productive meeting, during which they discussed examples of the close friendship between the United States and Aruba, such as tourism, anti-terrorism efforts, and university exchanges. Ambassador Hoekstra also learned of Aruba’s vital oil contribution to the Allied war effort during World War Two and their aspirations to transition to more sustainable practices.

On Sint Maarten he discussed methods to augment ties between the United States and the island with Governor Reynold Groenevledt, the Minister of Finance, and the Minister of Tourism. The establishment of a parliamentary Dutch Caucus to compliment the congressional Dutch caucus in Washington, D.C. and parliamentary Dutch caucus proposed by Dutch MP Martijn van Helvert was suggested, as was revitalizing the Dutch-American Friendship Treaty. They also discussed the potential to establish Customs and Border Protection Preclearance and sharing aerial data with the United States in support of the ongoing counter-narcotics mission.

Additionally, the Ambassador met with representatives from the World Bank and National Disaster Team to assess recovery efforts after Hurricane Irma swept through the island last year. Throughout the past year, the Dutch Coast Guard has worked to overcome the language barrier and increase cooperation with the French side of the island, as well as increasing information-sharing operations with other islands. Last week, the first segment of aid relief was released by the Netherlands through the World Bank. This first set of aid will be utilized to enact emergency repairs and disaster preparedness, while the second batch will focus on income support and skills training. In total, Sint Maarten will receive $550 million in aid by 2023.