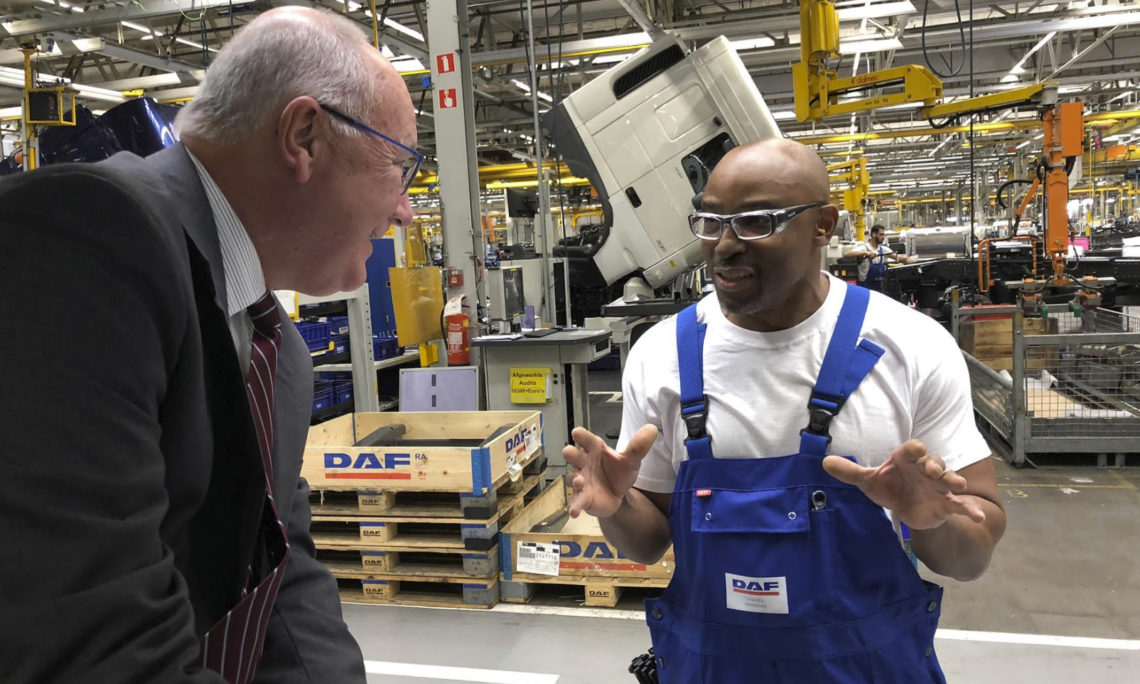 Ambassador Hoekstra speaks with the only American Employee of DAF Trucks

On October 24, Ambassador Hoekstra visited the city of Eindhoven, the Netherlands’ fifth largest city. Located in the province of North Brabant, Eindhoven is known as a technology and design hub.

The Ambassador began with a visit to the DAF Trucks operations and touring the facility.

Ambassador Hoekstra learned more about “Van Doorne’s Aanhangwagen Fabriek” – now called DAF – which was founded in 1928 by Hub van Doorne. Beginning with a small construction workshop in Eindhoven, the company grew into a global truck manufacturer.

American company PACCAR Inc, which is one of the largest manufacturers of medium- and heavy-duty commercial vehicles in the world, acquired DAF Trucks in 1996. In 2017, DAF generated record-breaking revenue of $6 billion with the manufacture of 60,000 trucks, resulting in a 15 percent market share in Europe. DAF employs around 8,500 people in their production facilities in the Netherlands, Belgium, the United Kingdom, and Brazil.

PACCAR and DAF are seasoned manufacturers of diesel engines but are now investing heavily in low-emission engines and the so called “truck of the future.”

In the afternoon, Ambassador Hoekstra joined other Ambassadors and Chiefs of Mission on a visit to Dutch design week, which was organized by Mayor Jorritsma of Eindhoven.

It is the largest design event in Northern Europe and presents work from more than 2,600 designers. Over 335,000 visitors from the Netherlands and abroad visit the event.  Dutch Design Week includes exhibitions, lectures, ceremonies, networking events, and festivities in over 100 locations across Eindhoven.