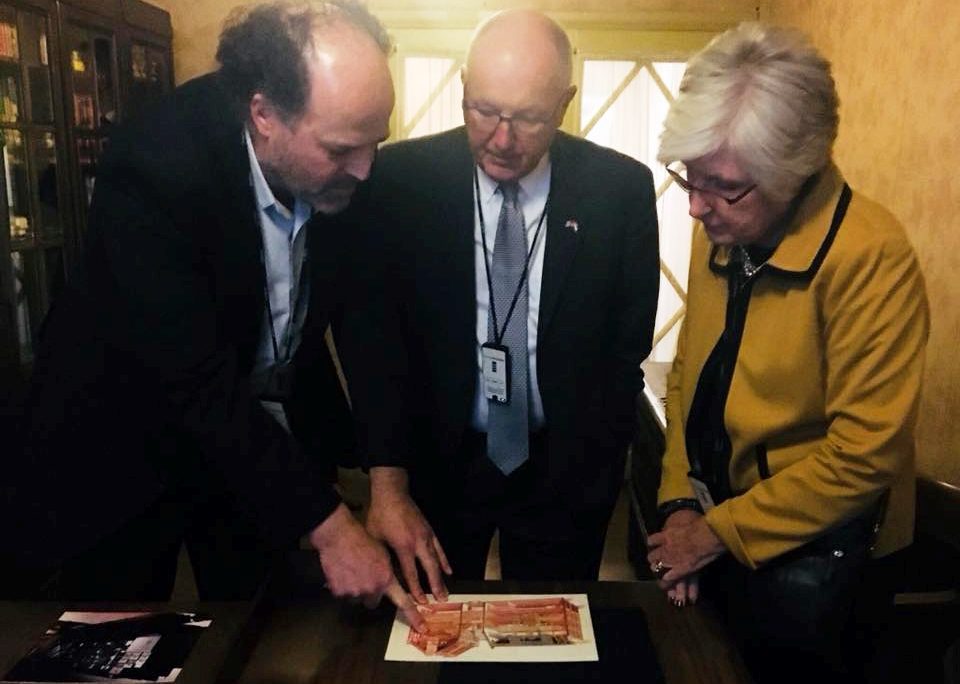 Ambassador Hoekstra and his wife Diane visited the Anne Frank House Museum in Amsterdam recently.  Director Ronald Leopold explained his organization’s educational mission and talked about the renovations being made to the building that houses The Secret Annex where Anne and her family hid from the Nazis for more than two years during World War II.

The museum is small.  It comprises the original building containing the hidden annex and one of the businesses of Otto Frank – Anne’s father – and a neighboring building.  Still, it attracts 1.2 million visitors a year.  The renovations are more for security and modernization purposes than increasing attendance, Leopold said.  After completion, he hopes the museum will be able to accommodate about 1.3 million visitors annually.  It is the third most-visited museum in the country, after the Rijksmuseum and the Van Gogh museum, both also in Amsterdam.

Leopold noted that about a third of the visitors come from the United States, which, he said, has always played an important role in the museum.  The play The Diary of Ann Frank premiered at the Cort Theatre on Broadway in 1955.  The movie of the same name followed in 1959, and the premiere was attended by Dr. Martin Luther King, Jr. on March 18 of that year.  According to Leopold, the attention these works gained in America was pivotal in raising support for Otto Frank, as he and the Anne Frank Foundation tried to save the building from developers who wanted to raze the entire block on which it sat.  The museum opened its doors in May 1960.

The Anne Frank House develops educational programs and products with the aim of raising young people’s awareness of the dangers of anti-Semitism, racism, and discrimination as well as the importance of freedom, equal rights, and democracy.  Since 1977, the Anne Frank Center for Mutual Respect in New York has used Anne’s diary and legacy to promote tolerance among young people and to fight discrimination.

Anne Frank was born in Frankfurt, Germany, in 1929.  Her family – Father, Otto; Mother, Edith; sister, Margot – fled to the Netherlands in 1933 after the rise of Adolf Hitler.  Otto became managing director of a company called Opekta, a spice and pectin company housed in what is today the museum.  Otto also started another company but the companies had to be liquidated and the assets transferred to non-Jewish ownership after the German invasion of the Netherlands in May of 1940.  Opekta, in the hands of friends of the Franks, continued to operate with only a select few employees knowing that above them eight Jews were hiding in the three-story annex hidden behind a bookcase.  After Margot had come to the attention of the German authorities, the Franks had to scramble into hiding on July 6, 1942.

Leopold took Ambassador Hoekstra into Otto’s private office.  It is still full of the original furnishings:  the desk and chairs, an old radio, and book shelves.  But what was most haunting was the loud creaking of the floorboards above as people visited the Frank’s hiding place.  Leopold pointed out that this was another of the many dangers faced by the Franks:  it was risky to move about during the day as it was always difficult during those times to know whom you could trust.  Leopold also discussed the critical role Dutch non-Jews played in hiding the Franks and four others who were with them as the Nazi operation to round up Jews was in full swing.

It is still not known what led to the storming of the building by German police on August 4, 1944.  The Franks were all sent to Auschwitz.  From there, the girls were transferred to Bergen-Belsen concentration camp.  Anne and her sister died there.  It is presumed that typhoid was the cause.  Edith died of starvation in Auschwitz.  Otto was the only inhabitant of the secret annex to survive.  After Auschwitz was liberated, it took him six months to get back to Amsterdam.  He did not learn of the fate of his daughters until he was back in the Netherlands.

Standing in that annex, looking at the pictures of her favorite movie stars that Anne stuck to her wall, powerfully reinforces the fact that Anne Frank – though now seen as a powerful symbol of the fight against repression – was only a teenager during World War II.  The sparseness of the museum is deliberate, Leopold said.  The 17th-century canal house and the museum it houses is one of the few museums that is about emptiness.

Coincidentally, Leopold pointed out, Martin Luther King, Jr. and Anne Frank were both born in 1929, King in January, Frank in June.  Two very different lives with two very similar struggles.  Both would have been 89 years old this year.