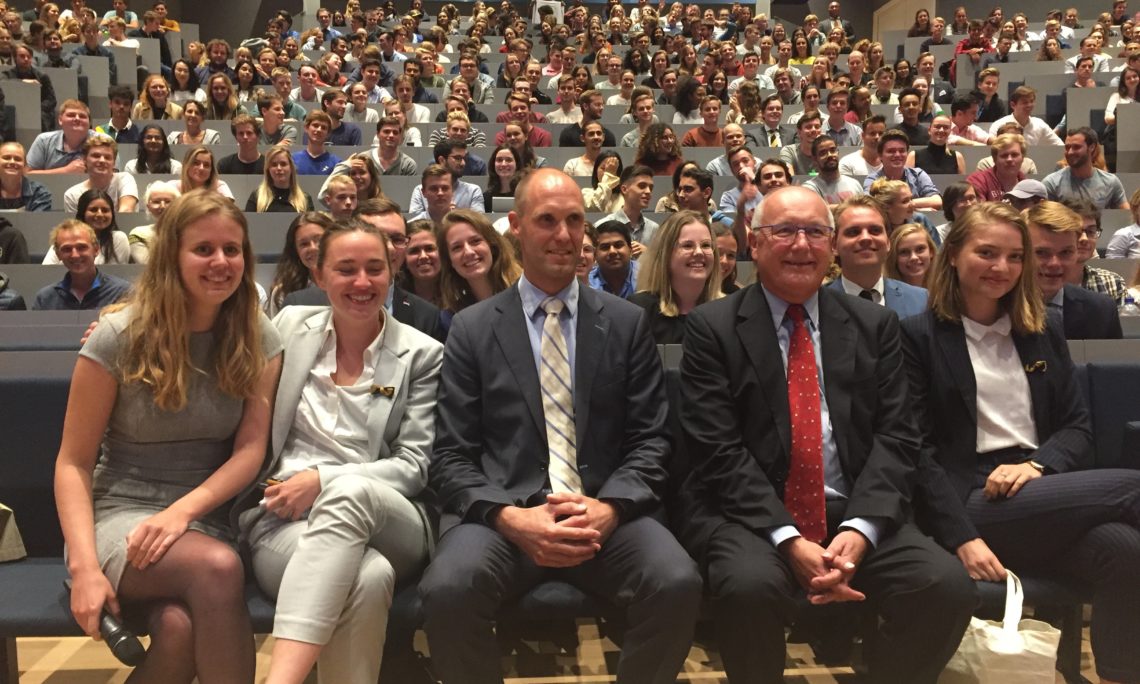 Ambassador Hoekstra at Leiden University in The Hague.

More than 700 students came to hear what Ambassador Pete Hoekstra had to say. For almost two hours, they asked questions about U.S. foreign policy, the bilateral relationship between the U.S. and the Netherlands and anything else that was on their minds.

The event was organized by Studenten Politicologie (SPIL), a study organization for political science and international relations students at Leiden University in The Hague. SPIL was founded in 1981 and organizes both social and educational activities, such as lectures, debates, study trips and movie nights.

At the request of organizers, Ambassador Hoekstra began by telling the students about how, three years after being born in Groningen in the north of the Netherlands, he set sail for America with his family – to Holland, Michigan. He talked about his student days, his career in the business world, and his first Congressional campaign to represent Michigan’s 2nd district. Fittingly, he covered much of the district by bicycle.

He then outlined his goals and objectives as Ambassador and some of the accomplishments of the last eight months since he presented his credentials to the King. Before opening the evening to questions, the Ambassador stressed the length and depth of the friendship between the United States and the Netherlands, as evidenced by the visit of Prime Minister Rutte with President Donald Trump in July.

He also stressed the importance of continued cooperation on security issues, as evidenced by the Aug. 31 terrorist attack in Amsterdam’s main station during which two American tourists were stabbed.

The turnout by the students was particularly impressive because the event began at 8 p.m. on a Monday night. The auditorium could accommodate just 500, so 200 students watched the event live-streamed in another room in the building.

Ambassador Hoekstra mixed in a bit of advice along the way, telling the students that life doesn’t always work out the way you plan it. When that happens, he said, it’s important “to take what you’re given and make the best of it.”

When the questions began, they covered a multitude of topics from tariffs to NATO and from cybersecurity to the United States role in the world. The questions had to be cut off by moderator Niels van Willigen just before 10 p.m., when the building was set to officially close.