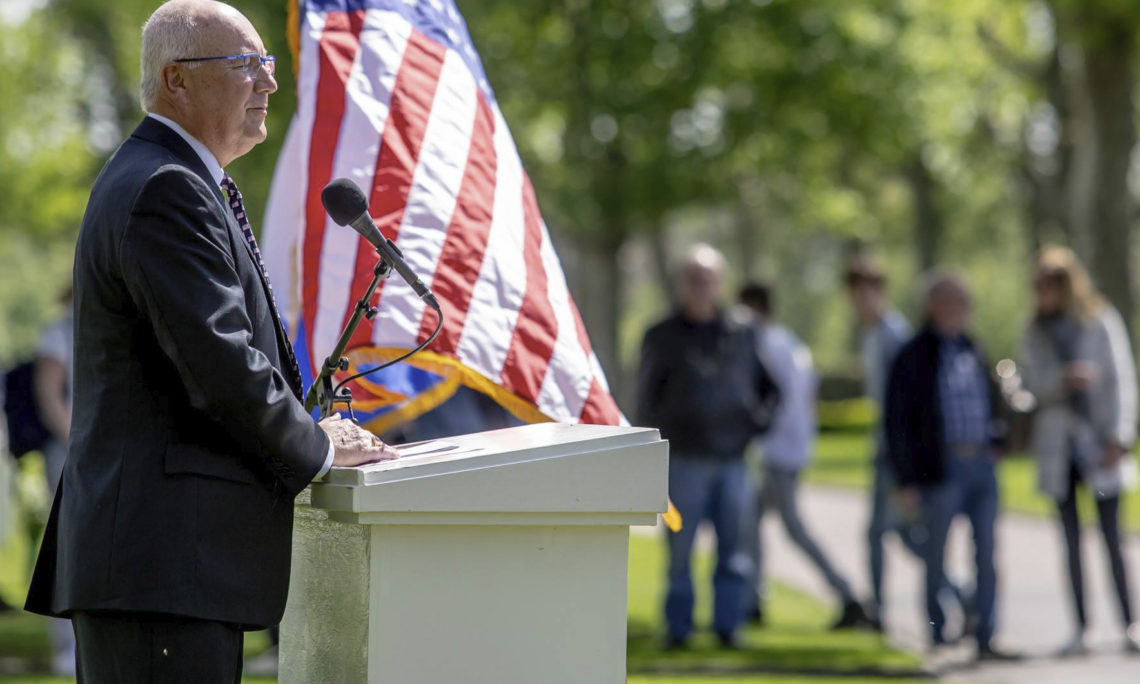 On May 2, 2018, Ambassador Pete Hoekstra visited the Netherlands American Cemetery Margraten to commemorate the fallen and missing men and women who helped in the liberation of the Netherlands during World War II and to show support for “The Faces of Margraten” initiative. He was joined by Theo Bovens, the King’s Commissioner of the Province of Limburg, and Dieudonné Akkermans, the Mayor of Eijsden-Margraten.

Sebastiaan Vonk, an American Studies student at Groningen University conceptualized the “Faces of Margraten” initiative in 2014 to give the young liberators of this country a face. Altogether, grave adopters, soldiers’ relatives, and a small group of volunteers have found more than 5,800 photos of the 10,023 soldiers who are buried at the cemetery or memorialized on the Wall of the Missing. Once every two years, the Stichting Verenigde Adoptanten Amerikaanse Oorlogsgraven (Foundation United Adopters American War Graves) makes a unique tribute to the men and women buried at the Netherlands American Cemetery Margraten by decorating their graves or names on the Walls of the Missing with a personal photo through this project.

“Faces of Margraten” provides us with those remembrances of who these individuals were. We can look into their faces and we will all read something different into each face,” said Ambassador Hoekstra during his speech at the ceremony. “We know that when we look into a face, we see a unique and special individual; someone with aspirations, someone with dreams, someone with hopes.”

At the conclusion of the ceremony, Keith Stadler, the Superintended of the American Battle Monuments Commission led Ambassador Hoekstra and his wife Diane on a tour around the cemetery to pay his respects to the fallen soldiers who were from the Ambassador’s hometown of Holland, Michigan.

This unique tribute will be shown daily from May 2 to May 6.