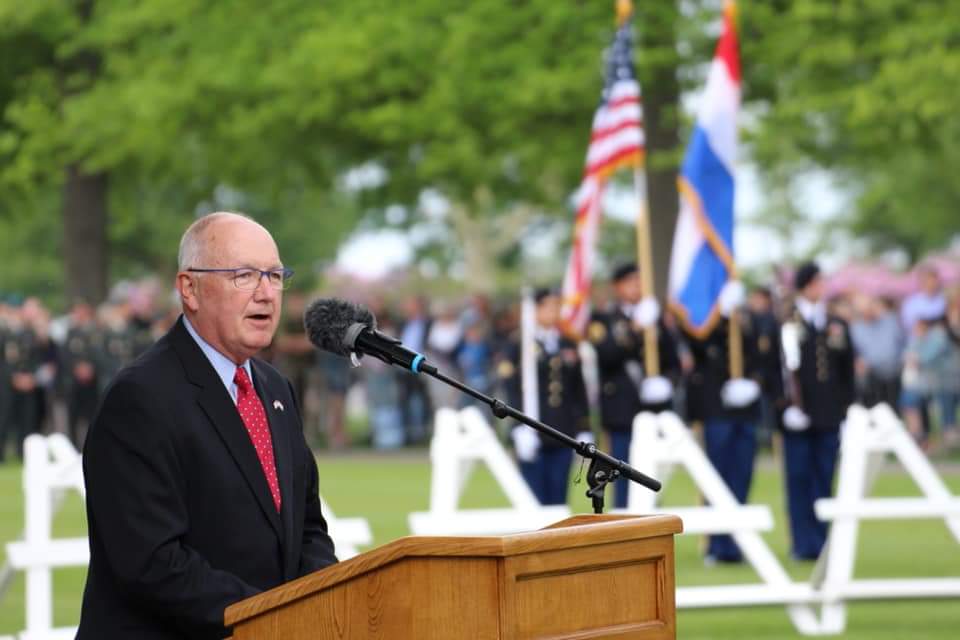 Ambassador Hoekstra’s Remarks at the annual Memorial Day ceremony as prepared.
Sunday, May 26, 2019

Minister Blok, Governor Bovens, Admiral Ishee, Mayor Akkermans, distinguished veterans, your excellencies, Superintendent Williams, ladies, and gentlemen, it is truly an honor to join you once again, marking the 75th annual Memorial Day ceremony on these hallowed grounds. Everyone here today knows that this is a special place. This is home, for many of our beloved countrymen who gave their final measure and were laid to rest here.

First, let me express my deepest appreciation to the members of the armed services here today–Dutch, American, and Allied–as well as our veterans and their families. I also want to thank our host, the American Battle Monuments Commission, who continue to ensure that time will not dim the sacrifices of those remembered here. Their efforts are assisted by the thousands of Dutch citizens who for decades have adopted the graves, tended the memories, and taught their children that freedom is not free. I know of no other nation in the world that does this. Ik dank u namens het amerikaanse volk en uit het diepst van mijn hart.

Next week, we celebrate the 75th anniversary of D-Day. As the men prepared to set out for what might be their last day on this earth, they were greeted with a D-Day message from General Dwight D. Eisenhower, who wrote, “the eyes of the world are upon you. The hopes and prayers of liberty-loving people everywhere march with you.” Today the hopes and prayers of liberty-loving people are still with them as we remember their sacrifices. Those hopes and prayers are compounded exponentially in the lives of their grandchildren and great grandchildren, who have never known anything but a peaceful, prosperous, and stable Netherlands.

The world stood shocked last April as the beautiful Notre Dame Cathedral burned in Paris. People cried, people prayed, people started to promise to rebuild. It stuck me that we live in a very different world than the one these soldiers knew. Destruction, fire, hunger, and death were a part of everyday life for them and yet they pushed on.

Young Americans from every one of the our 50 states left their homes and families, put on uniforms, trained for war, traveled across an ocean to fight their way through North Africa, Italy, France, and Belgium. They fought an experienced and determined enemy. In September 1944, they crossed yet another border into the Netherlands to liberate the Dutch people from oppression and take the war a step closer to Germany itself.

These battles raged across once picturesque towns and villages of Europe. These battles were tough and many civilians were killed along with the soldiers and airmen who fought so bravely.

They died in a world at war, but they did not die in vain. Today we remember the example set by these courageous soldiers. They willingly left farms and cities far from harm’s way for a simple and pure premise – the idea that freedom is a value that must be preciously guarded and fiercely defended.

Freedom and security are worth the investment. This is something Americans know well. In the 75 years since D-Day, our men and women have continued to defend liberty and freedom around the world. They have continued to pay the ultimate price for the freedom of others in places like Vietnam, Korea, Iraq, Afghanistan, and Syria. The sacrifices of all these fallen teaches us that defending our common values requires investments of both blood and treasure. This is a lesson we must never forget.