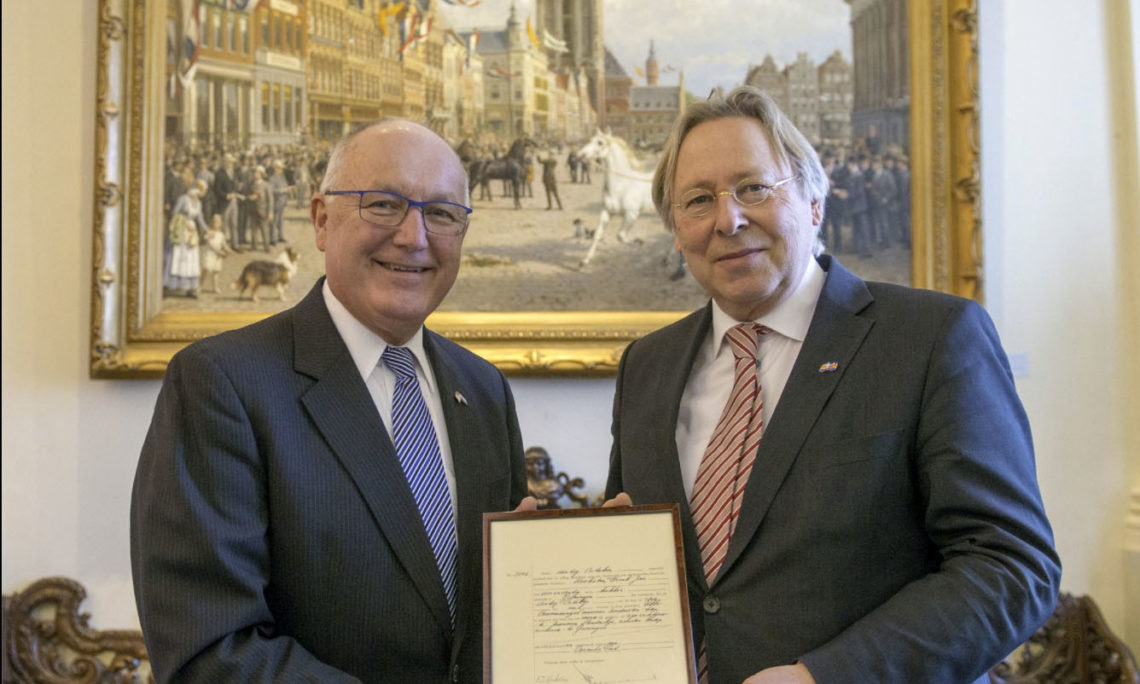 March 6-7 2018 – Ambassador Pete Hoekstra visited his birthplace – the city of Groningen. His two-day journey offered a nostalgic look at the city where his parents lived, but also included briefings and meetings with officials, local businesses, universities, and institutes to learn about the innovative opportunities in the northern city.

The Ambassador visited the European Research Institute for the Biology of Ageing (ERIBA). Based at the University of Groningen Medical Center, ERIBA aims to develop profound strategies to prevent and combat age-related disease as well as provide evidence-based recommendations for healthy ageing. Ambassador Hoekstra’s meetings helped to look for ways to encourage further cooperation between ERIBA and technical agencies and research institutes based in the United States.

He also visited Energy Academy Europe to learn about initiatives to promote new energy technologies in the northern Netherlands and to seek opportunities for U.S. businesses and research institutes to contribute to the Netherlands’ energy transition. The academy’s use of education, research, and innovation has allowed for the development of major energy technologies and policies that have been used by major companies such as, Shell and Dutch energy companies.

As one of the oldest institutions in the Netherlands, Groningen University is an internationally regarded school that holds a large population of international students. Ambassador Hoekstra’s meeting with the University Board and Staff looked at major initiatives in the university’s international relations program and he learned of the school’s professors who earned the Nobel Prize in Chemistry.

Ambassador Hoekstra also met with René Paas, the King’s Commissioner to Groningen to seek more information about Groningen Stad and Ommelanden. The briefing provided information on the rich history the people of the province embrace and it encouraged the development of a closer relationship between the province and the Mission. Paas is a representative of the national government whose office is a key liason for residents and the gas sector.

Natural gas holds historic importance to the Dutch economy and energy mix. Ambassador Hoekstra met with representatives from the three most important companies for the Dutch natural gas sector, GasTerra, Gasunie, and Nederlandse Aardolie Maatschappij (NAM) to discuss the future role of natural gas in the Netherlands and the shift from a net exporter to a net importer of natural gas. This was a key discussion due to the coming reductions of natural gas production in response to an increase in seismic activity.

Economic ties are one of the pillars of the bilateral relationship between the United States and the Dutch. A dinner and a breakfast meeting were held with U.S. companies in the Groningen Area and innovative Groningen-based companies, respectively. These meetings with enterprises, both large and small, discussed the advantages and challenges of having companies based in, or expand to the Netherlands. Some businesses that were being represented were Google, Dow Benelux, HackerOne, and Dutchchainers. Groningen demonstrated that it is a major influence on the business climate of the Netherlands.

Ambassador Hoekstra visited the Groninger Museum to learn about the artistic heritage at one of the city’s preeminent cultural attractions and had a tour of the city to learn of the historic buildings, as well as to visit the clinic where he was born and the home where he lived until he emigrated in 1956.

More photos from the visit to Groningen