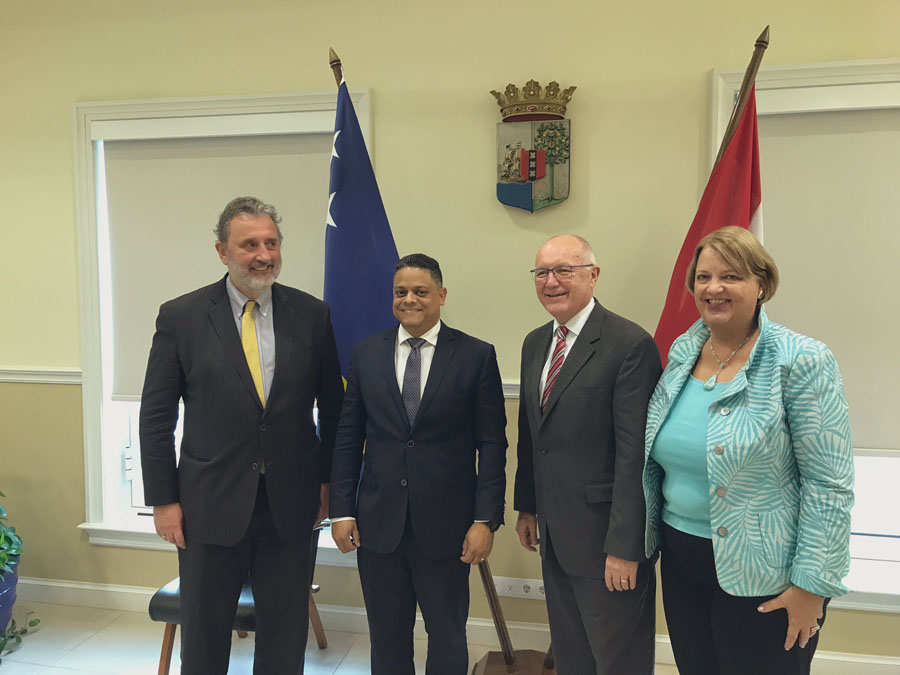 The Road to GES - Caribbean

Ambassador Peter Hoekstra traveled to Curacao to take part in events around the “Road to the Global Entrepreneurship Summit (GES)-Caribbean.” Ambassador Hoekstra addressed more than 200 entrepreneurs from throughout the Caribbean about the importance of entrepreneurship in today’s global economy. He said that he had been highly impressed by the business concepts, innovation, and entrepreneurship he had witnessed in Curacao. Also attending the event were Eugene Rhuggenaath, the prime minister of Curacao, Henne Schuwer, the Dutch Ambassador to the United States, Hanneke Schuiling, the director general of foreign economic relations at the Ministry of Foreign Affairs, and Consul General Margaret Hawthorne of the U.S. Consulate in Curacao.

The next Global Entrepreneurship Summit will be held in The Hague, June 4-5, 2019. It will be the first time the event has been held in Europe. It is expected to attract more than 2,000 world leaders in entrepreneurship, investment, and policy.

The event in Curacao was part of the global celebration of entrepreneurs and the build-up to the Summit in The Hague this June.  The event in Curacao was regarded as the “kickoff” of various Road to GES programs in the United States, in Europe, and around the world.  Many members of the American and Dutch planning teams will be at the Road to the GES-Heartland in the state of Kansas, back in the United States, beginning March 18.

In prepared remarks, earlier in the day, Ambassador Hoekstra outlined the importance of entrepreneurship:

“The entrepreneurial spirit is the lifeblood of the free-market economy.  At its core, it is about empowering people to reap the benefits of their own labor and giving people the freedom to pursue opportunities that will help them improve their lives and those of their families, as well as the community they live in.  Through entrepreneurship, people become more self-reliant and stronger contributors to their local economy.

“Entrepreneurship is also the driving force behind a steady stream of creativity which, when injected into the marketplace, helps companies, industries, communities, and countries compete and prosper.  Put differently, the new products, services, and ideas that are launched into the marketplace by entrepreneurs help drive innovation in our society.  This kind of experimentation doesn’t often come from the government, major companies, or non-profit organizations.  They are generally risk-averse.  Entrepreneurs, on the other hand, are the risk-takers; people with big ideas, who are willing to go out on a limb for those ideas, and who have the fortitude to push those ideas into the marketplace.  Life-changing innovations in transportation, medical care, computing, communication all began with an innovator willing to take a risk, test an idea, and pursue a dream.

“I also think entrepreneurship, and an entrepreneurial mindset, is a skill that is applicable in any profession.  I will talk about this further in my Future of Work panel later today, but the skills of an entrepreneur — risk taking, creativity, market analysis, product development, collaboration, optimism for the future, experimentation, hard work — are, I would argue, important skills for any professional.  I think employers today value more and more an entrepreneurial, creative spirit in their employees.  They want employees who can see opportunities where others cannot, and who can build products, services, or strategies to take advantage of those opportunities.  I think they want people who can articulate how a new opportunity can provide value to the team and the company.   Launching a startup requires strength and resilience — skills that are developed through the ups and downs of life as an entrepreneur.

“Entrepreneurship also attracts talent, enhances prosperity, and improves quality of life.  Today, as you are all aware, growing the startup culture and the entrepreneurship “eco-system,” is seen as an important tool of economic development for cities, regions, and countries at all levels of development.  Some say there is a “global war for talent” and I think there is a certain amount of truth to this.  The locations that are best at attracting and retaining entrepreneurial talent are the ones that will prosper.  Entrepreneurs see the opportunity within the market, and position the company to exploit it.

“There is an important role for government here in ensuring that necessary regulation does not stifle innovation.  Government can ensure that permitting processes and business-formation rules are transparent, well-understood, and appropriately benchmarked. It can ensure that taxation rates are competitive, that the cost of doing business is low, and that everyone has a fair chance to compete on their merits.

“Government also plays an important convening role.  Government can bring together the important players:  universities, investors, thought-leaders, planners, analysts, and entrepreneurs.  Government leaders can help scan the horizon for best practices used by other cities, regions, or countries.  They can help build momentum, celebrate entrepreneurial achievement, and facilitate partnerships that lead to new deals, new products, and new success stories.  That is what the Global Entrepreneurship Summit, and the Road to the GES here today are all about.”