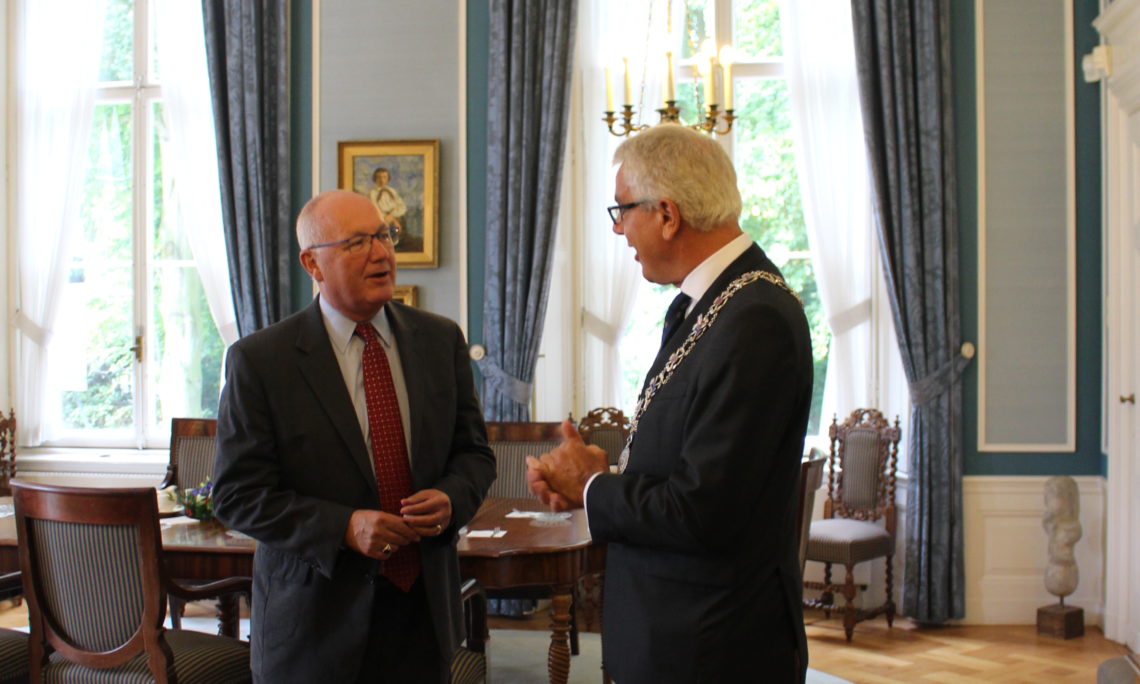 American Ambassador Pete Hoekstra had a special tour of the municipality of Wassenaar on August 29, at the invitation of Acting Mayor J.F. Koen. Their tour began at the Wassenaar town hall building, De Paauw, where they discussed the upcoming Global Entrepreneurship Summit, the new Embassy in Wassenaar, and the amenities that the municipality has to offer.

They paid a visit to Luciano’s Ijssalon in downtown Wassenaar. Owner and ice cream specialist Luc Blok treated them both to some of his famous flavors. The Mayor and Ambassador then walked down Langstraat and visited the oldest monument in Wassenaar, De Dorpskerk. The oldest parts of the church date back to the 12th century. The church features a historic organ, beautiful stain glass windows, and a tree planted in the churchyard in 1898 in honor of the inauguration of Queen Wilhelmina. “The church was restored in 1939, but you can still see many original features,” explained Reverend J.A.D. (Deadaat) van der Boon.

The tour continued with a visit to the Dunea information center in Meijendel. “These dunes act as a filter to provide water to 1.2 million people,” said Ans Groenewegen, Dunea Environmental Manager. She explained that around 1 million people visit the dunes each year. A current project to catalogue the wildlife in the dunes has resulted in more than 5,000 species and they expect to surpass 7,000 before they are finished. To round off the tour, Wassenaar City Manager Helene Oppatja and Communications Officer Alexander Oostermeijer joined the group for lunch at Boerderij Meyendel.