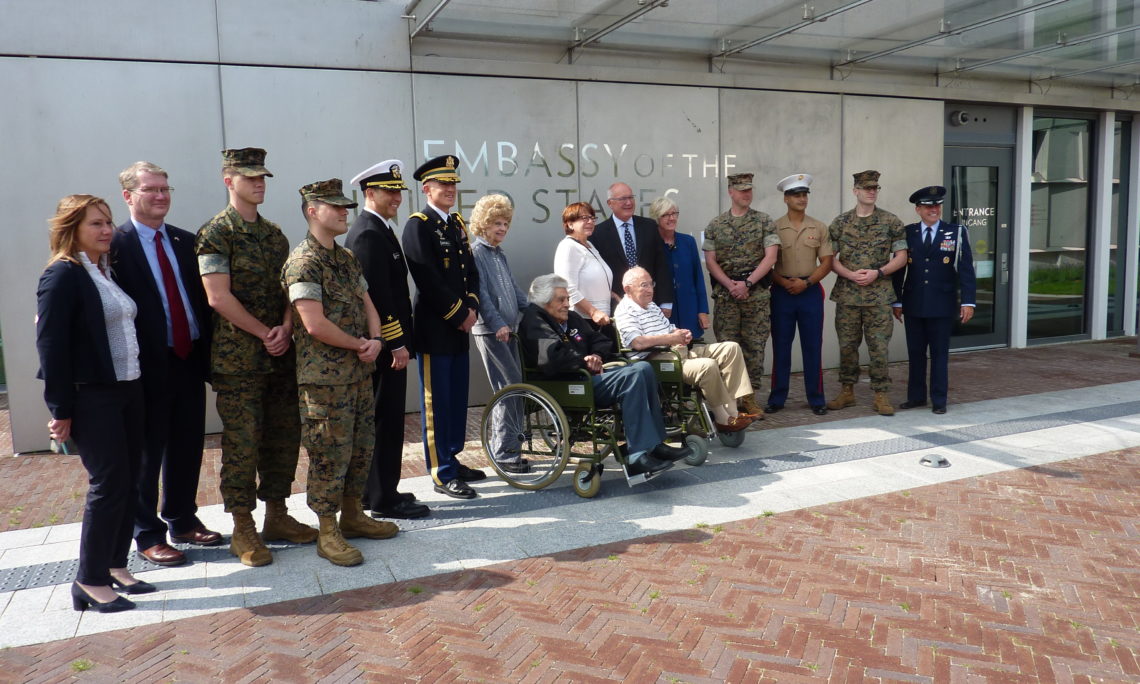 The two veterans being welcomed by Ambassador Hoekstra and Embassy staff members to the Embassy.

World War II veterans Captain Roy Hanna and Lieutenant Colonel James “Maggie” Megellas visited the Embassy August 30 for a question and answer session with the Embassy staff.  This was one of many trips the men have made to the Netherlands, but they focused on the first time they entered the country in September of 1944.  Both men are 101 years old and are decorated veterans of the 82nd Airborne Division.  In 1945, Megellas received the “Military Order of Wilhelm” on behalf of the 82nd Airborne from the Dutch Minister of War.  He was the first American decorated by the Dutch government.  Hanna is one of the original members of the 504th Parachute Infantry Regiment.  He is one of the few original officers of the 3rd Battalion that survived WWII.

The veterans wanted to visit the Embassy during their trip to the Netherlands to speak with the Ambassador and staff about their experiences.  During their event, they recounted the events while crossing the Waal River in Nijmegen during Operation Market Garden on September 20, 1944.  Of the 26 canvas boats that set out to cross the river, only 13 reached the other side.  Two hours after the river crossing, the paratroopers captured the rail bridge, but not before 48 allied soldiers lost their lives.

Both men have won the Distinguished Service Cross.  Megellas is the most decorated officer in the history of the 82nd Airborne Division.  He also has a Silver Star and has been nominated for the Medal of Honor.

Ambassador Hoekstra thanked the men during their introduction, noting that he was grateful for their service and for their sacrifices.  “You helped to liberate my parents, and I am so thankful.”